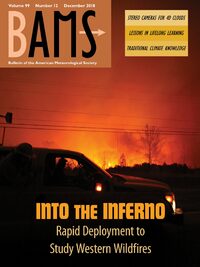 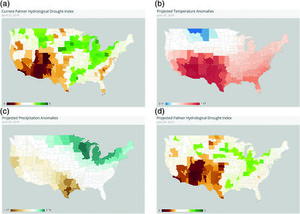 Following four consecutive years of drought in California from 2011–15, questions once again arose about how much rainfall it would take to ameliorate (reduce) or eliminate the state’s long-term drought. Determining how much rain and snow must fall to end a meteorological and/or hydrological drought is a multifaceted challenge, yet it is a question routinely asked owing to the far-reaching societal and economic impacts of drought. The National Oceanic and Atmospheric Administration (NOAA)/National Centers for Environmental Information (NCEI) in collaboration with the National Integrated Drought Information System (NIDIS) hosts and maintains a drought amelioration website that aims to answer that question. The ultimate goal of NOAA’s drought amelioration website is to provide support information to aid in interaction with the media and the public when communicating about the uncertainty around the amelioration of drought and its impacts. Though the tool is national in scope, the unprecedented drought over California and Nevada merited a focus on this region for this effort.

While some drought indices address only the water supply side of the drought equation, the Palmer hydrological drought index (PHDI; Palmer 1965) incorporates water supply (precipitation) and water demand (derived from temperature) with a soil moisture component. In addition, the PHDI water budget accounting process is straightforward, standardized for comparison across space, and based on data that provide a century-scale historical perspective. The PHDI equations can be easily engineered to compute the precipitation amount required to improve the PHDI value to a) −2.0 to ameliorate drought and b) −0.5 to end drought (Karl et al. 1987). Furthermore, historical precipitation data over a 120+-yr period of record can be used to compute the probability (or likelihood) of receiving this precipitation amount (Karl et al. 1987). The NCEI drought amelioration tool uses the PHDI for these reasons. However, the Palmer indices (including the PHDI) have limitations that have been extensively discussed (e.g., Heim 2002), but they also meet several desirable properties of climate indices (e.g., timely input data and incorporation of long-term climate statistics; Redmond 1991, 2002). The typical conditions that a region experiences during each month and season of the year (i.e., that region’s climatology) is also essential when considering how much rain it takes to reduce or eliminate a drought. Given a drought of equal magnitude in a dry and wet climate, the wetter region requires more precipitation to end the drought (i.e., bring the PHDI value to −0.5; Karl et al. 1987). Knowledge of the severity of the drought, the precipitation needed to ameliorate it or end it as defined by the PHDI, and the historical probability of receiving that amount provides the essential starting point for determining if and when a drought will end.

With climate tools and services increasingly being linked to sector-specific users and requirements (e.g., NOAA 2016), both NCEI and NIDIS seized the opportunity to work with end users to update, modify, and mold the website to make it more useful. Through the use of “participatory design,” or “human-centered design” (Norman 1988; Schuler and Namioka 1993; Abras et al. 2004; Bødker 2004; Spinuzzi 2005; Oakley and Daudert 2016), two separate user-engagement workshops were held to assess the usability and usefulness of the NCEI drought amelioration tool and test if participants believed the tool could help with decision-making.

A set of best practices specifically addressing the usefulness and usability of websites in the delivery of weather and climate data were outlined by Oakley and Daudert (2016). In that paper the authors stress the usability of a website where users can gather the information they need in an efficient and effective manner, which in turn can generate return traffic. This process of working with users and iterating over design and functional elements of a tool/website is often referred to as participatory design (Abras et al. 2004; Bødker et al. 2004; Robertson and Simonsen 2012).

In participatory design the users are a central part of the development process (Abras et al. 2004). Furthermore, Robertson and Simonsen (2012, p. 2) state that, “Participatory design can be defined as a process of investigating, understanding, reflecting upon, establishing, developing, and supporting mutual learning between multiple participants.” In this setting, the participants play the role of user and designer, helping to articulate their needs while learning about the technological means to obtain them (Robertson and Simonsen 2012).

Following Abras et al. (2004, p. 767), the key advantage of the participatory design approach is that “a deeper understanding of the psychological, organizational, social and ergonomic factors that affect the use of computer technology emerges from the involvement of the users at every stage of the design and evaluation of the product.” Furthermore, from Spinuzzi (2005) and Clement (1994), a primary goal of participatory design is to empower users in making their own decisions through the processes of co-research and co-design, such that scientists must come to conclusions in conjunction with the users. In the case of the NCEI drought amelioration tool, the users and the scientists were connected through dialogue, the sharing of knowledge through an open and authentic meeting (Kruk et al. 2017). In addition, the workshops facilitated the role of walkthroughs and simulations (Abras et al. 2004), whose purpose was for the attendees to evaluate the web tool design while scientists gained information about the user needs and expectations. In this phase, the authors carefully observed firsthand how each participant navigated the website and recorded their enhancement requests and criticisms. A common facilitation method, dot voting, was used whereby the participants ranked these enhancement requests. In participatory design, not only does dot voting create a sense of engagement and reflect the group’s shared perspective, but it also provides an opportunity to let all voices be heard and accounted for (Adams et al. 2015). Finally, participants also evaluated, through a questionnaire, whether they could determine how much rain it would take to end a drought at a certain location over a variety of time periods.

The first of two user-engagement workshops was held in Orange County, California, in September 2015 and was titled, “Exploring Drought Recovery Climate Tools in the Western U.S.” The attendees represented a variety of user types, including tribal leaders, Bloomberg News, the San Diego Public Water Utility, the California State Climate Office, the National Weather Service, the California–Nevada Climate Applications Program, and the University of California–Irvine, as well as staff from the Desert Research Institute. Workshop participants shared their knowledge of drought, their favorite go-to tools, and actions taken during a drought within their specific discipline. In another session, the attendees were divided into sector-based breakout groups (e.g., utilities, academia, government) and were directed to identify areas of improvement and elements they liked, as well as whether the information presented in the tool was clear and meaningful. The workshop attendees identified the following elements of the website they most wanted to be updated:

Although scientists initially designed the website back in the early 1990s, these user-identified priorities became the guidelines by which operational changes were made to the site. As part of these changes, NCEI and NIDIS collaborated to specifically address the last bulleted recommendation of producing projected PHDI maps.

The NCEI-projected PHDI map is based upon three inputs: the current PHDI [Fig. 1a, based on the 344 NCEI climate divisions across the continental United States (CONUS); Karl and Koss 1984] and the CPC seasonal temperature (Fig. 1b) and precipitation (Fig. 1c) outlooks (based on the 102 megadivisions across CONUS). An example of the output from this process is shown in Fig. 1d. The CPC outlooks are provided for all deciles between the 10th and 90th percentiles, and they also provide the 2nd, 5th, 95th, and 98th percentiles of their model ensembles. Based on user input, we only considered the 50th percentile as a first step.

Because of the nature of existing data streams, several necessary assumptions were made during the computation of the NCEI-projected PHDI. First, we assumed that the anomalies for each of the 102 CPC megadivisions are equitably distributed across the 344 NCEI climate divisions. Similarly, we assumed that the CPC 3-month seasonal forecasts are equitably distributed across each of the three months relative to the 1981–2010 normals [as derived from the Vose et al. (2014) gridded climate dataset] for the climate division. The projected PHDI maps are operationally generated and hosted on the Projected Drought tab of NCEI’s Drought Termination and Amelioration website.

By definition, the participatory design process is an iterative effort (Bødker et al. 2004; Spinuzzi 2005; Robertson and Simonsen 2012) and recommends that time be allocated to critically examine the impacts of the redesign. To that end, a second drought amelioration workshop was held in June 2017 in Lake Tahoe, Nevada, and was titled, “Do Floods Terminate a Drought? A Workshop on Drought Recovery Tools, Perspectives, and Situational Awareness” (more information is available online at www.drought.gov/drought/news/new-tools-help-visualize-future-drought). The purpose of this workshop was to assess the redesign elements of the NCEI drought amelioration tool and to test if participants believed the tool was helping decision-making. Participants stated that the revised tool could help inform their decision-making, particularly in whether or not to apply for grants from the Bureau of Indian Affairs, while others said the month-to-month change in the quantity of precipitation needed to ameliorate a drought affected how they would manage their rangelands or choose to irrigate. The consensus of user feedback revealed that the NCEI drought amelioration tool remains a timely and highly utilized tool as decision-makers are continually preparing for the next drought. In addition, a presentation on the first iteration of the NCEI-projected PHDI maps was highlighted during the second user-engagement workshop, from which the following additional user requirements were identified. Participants were enthusiastic about the projected drought maps and further stated that their stakeholders are requesting information beyond the current 3-month outlook period (to include 6- and 9-month outlooks) as well as wanting the extreme combinations from the CPC outlooks (e.g., hot and dry, cold and wet) to better capture the range of uncertainties.

In addition to the request for more projected PHDI maps, participants also recommended the following refinements and enhancements to the drought amelioration web tool:

The author team continues to address the above set of redesign elements and will again iterate with users to evaluate the functionality of the NCEI drought amelioration tool.

The PHDI-based drought recovery information provided on the NCEI website addresses the climatological component of drought recovery and provides an important foundation, or beginning, for the decision-maker to apply to their sector/context. Knowledge of reservoir levels and recharge rates, groundwater levels and geologic factors affecting their recharge rates, and management practices involving reservoirs and groundwater need to be applied separately and in addition to the information obtained from the NCEI tool. Regions that are heavily irrigated and where water is heavily managed, such as California, complicate the utility of the PHDI and other drought indices. But all drought is ultimately driven by precipitation, and the PHDI drought recovery tool provides invaluable information for this foundational variable.

Participatory design is important as products and services are developed and enhanced by applying direct knowledge of the subject matter to the final end deliverable. The recently updated NCEI drought amelioration web tool, changes to which are consistent with suggestions made by workshop participants, is a direct reflection of this iterative co-design process. In addition, this process has also improved the relationships between users and NCEI scientists and has greatly facilitated NCEI scientists to better understand the underlying decision space in which users operate. It is important to emphasize, however, that engagement of this kind is not stagnant. User requirements are constantly evolving as conditions change, external pressures mount, and funding mechanisms are influenced by changes in local, state, and even national policies. Engagement to operations must remain an iterative, regularly occurring process to ensure the final product is not only current but also useful, usable, and used.