AMS products and services ranked according to the percentage of survey participants who rated the service as at least “somewhat valuable” or “essential.” 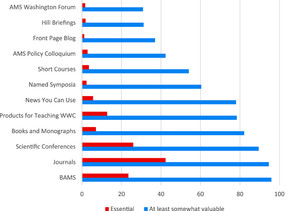 How Satisfied Are AMS Members with the Society?: Results from the 2014 AMS Survey

Every 5–10 years, the American Meteorological Society (AMS) surveys its members to better understand their demographics and satisfaction with the services provided by the Society (Kellogg 1977; Stephens and Kazarosian 1992; Zevin and Seitter 1994; Michaels et al. 2001; Murillo et al. 2008). The latest of these surveys was conducted in 2014.

As was true for past surveys, the 2014 survey consisted of questions on educational background, employment characteristics, and demographics. In addition, particular emphasis was placed on gathering information on members’ perceptions of the value of membership in AMS and the importance of various AMS products and services. A total of 4,844 individuals, or 38% of the AMS membership, responded to the 2014 survey.

As part of a series of articles describing the survey results (e.g., Behl et al. 2017), this paper focuses on respondents’ perceptions of the value of their AMS membership. Specifically, we present an analysis of how different sectors of the workforce view the benefits of AMS membership.

We utilized the initial tabulation of results from the 2014 survey that was performed at the American Institute of Physics to create the summaries presented herein. Our interpretation of these statistics was aided by answers to open-ended survey questions.

For the purpose of our study, we divided respondents to the survey according to their “engagement,” or level of participation, in weather, water, and climate (WWC) fields. These categories were composed of members of the WWC workforce (73% of respondents), students (18%), retirees (8%), and those who joined AMS out of personal interest (1%). We further analyzed respondents engaged in WWC by employment type: university, government, media, other private, nonprofit, and K–12.

Below, we first provide a summary of the primary results of our analysis. The subsequent sections contain a more detailed presentation of the results, and in the final section, we present some recommendations for next steps that AMS leadership may wish to take on the basis of these findings.

Following is a summary of the key findings on member satisfaction that can be gleaned from responses to the 2014 survey:

Survey participants were asked to classify the value of their AMS membership dues as “excellent,” “satisfactory,” or “not good value.” The results are summarized in Table 1.

Indicators of overall satisfaction with AMS membership dues according to engagement category. All values are percentages. 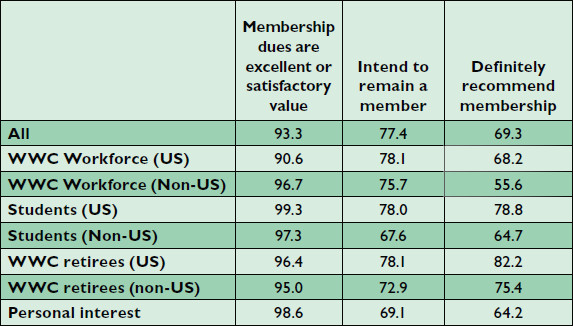 Overall, 93% of all respondents rated the value of membership as excellent (36%) or satisfactory (57%), while 7% deemed it not to be a good value. When asked whether they intended to retain their AMS membership over the subsequent three years, 77% of participants responded in the affirmative (Table 1). In addition, 69% indicated that they would “definitely” recommend AMS membership to others.

Satisfaction levels varied among different engagement and employment categories. On one end of the spectrum, 58% of students responded that AMS membership was an excellent value. On the other end of the spectrum, only 13% of respondents who identified themselves as members of the media chose “excellent,” and 18% responded “not good value.” Nevertheless, even among this group, 78% indicated that they would definitely remain part of AMS during the subsequent three years.

We diagnosed the reasons for high levels of satisfaction of survey respondents with the value of their membership in AMS by analyzing three sets of results from the survey: the comments respondents made regarding the value of their membership, the factors that motivated respondents to become AMS members, and responses to questions that characterized the extent to which the products and services offered by the Society were utilized and served members’ needs. The statistical results are summarized in Fig. 1 and Tables 2 and 3.

Reasons for joining AMS according to engagement category and type of employer. All values are percentages. 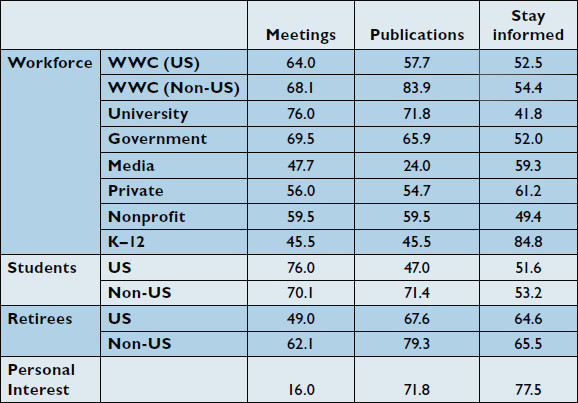 Utilization of AMS conferences and publications according to engagement category. All values are percentages.

Based on our analysis, it appears that there are two principal factors contributing to member satisfaction: the ability to receive desired information about the WWC field, and the recognition and connections with the WWC community that come with AMS membership. One member summed up the value of membership this way: “I currently feel very included within the AMS community. I enjoy getting updates via AMS News You Can Use. I also look forward to receiving BAMS publications. The conferences that I have attended have been very welcoming and informative.”

Within most of the engagement and employment categories shown in Table 2, the three most frequently chosen reasons for joining AMS were attending meetings (65%), publications (61%), and staying informed (54%), though the order of importance of the three reasons varied among different groups. To a large extent, the products and services offered by AMS appear to satisfy those needs, as is demonstrated by the following findings:

Members had many good things to say about staying informed through AMS. Some of the most common themes are reflected in the following comments:

Along with the high rate of satisfaction among survey respondents, the survey also revealed three areas of concern. First, at the time of the survey, some AMS services were utilized only by a minority of members. Second, a commonly cited reason for dissatisfaction was the cost of attending conferences, and a number of members were unable to participate in the AMS Annual Meeting at its typical time in January. Finally, some members expressed feelings of being marginalized within the AMS community, either at the national or the local level. All of these factors likely contributed to some dissatisfaction with the cost of membership in relation to the benefits received and are further discussed below.

Limited utility of some AMS services.

Not all AMS products and services found wide appeal among survey respondents (Fig. 1). Only about one in nine read at least some posts on The Front Page blog, and fewer than one-third considered AMS short courses, Hill Briefings, and the Washington Forum to be at least “somewhat valuable.” Survey results further show that large fractions of members had never attended a conference tailored to their interests: 67% of U.S. student members had not participated in an AMS Student Conference; 97% of U.S. residents engaged in the WWC workforce and 96% of U.S. students had not taken advantage of an Early-Career Professionals Conference; and 76% of those working in the media had never attended a Broadcast Meteorology Conference.

Cost and timing of AMS-sponsored meetings.

Despite widespread interest in AMS-sponsored scientific conferences, nearly half (48%) of the survey participants did not attend such a meeting in the three years prior to the survey. The most commonly stated reasons for nonattendance were the costs of travel and registration, which were selected by 52% and 29% of respondents, respectively.

In particular, 60% of members of the media, students, and precollege teachers reported that travel cost was the main factor preventing them from attending an AMS meeting. For example, an AMS member who works in media noted: “I really feel like AMS needs to look at logistics, cost of hotel/airfare, etc. before booking some place. Many TV stations are tight on budgets and if my station doesn’t pay for it I can’t afford to pay for it and take the time off work…” Furthermore, in part because of the high travel and registration costs, 42% of government employees cited lack of employer support as a significant reason. As one member put it, “Employer was largely unable to support trips to conferences due to lack of congressional support in funding these endeavors.”

Responses to open-ended questions further suggest that several members experience scheduling conflicts with the January dates of the AMS Annual Meeting due to proximity to the holidays, coincidence with an important part of the academic year, and the busy winter weather forecasting season. These viewpoints are exemplified by the following comments:

Several members suggested as a remedy to these scheduling issues that AMS offer continuing-education opportunities via webinars or other means throughout the year rather than at conferences alone.

Judging from responses to an open-ended survey question regarding inclusion and fairness, not all members feel welcome in the Society. One member observed, “The AMS often functions as a very closed network of people who know each other with little interest in incorporating other people into that network.”

Those feeling excluded from the mainstream include some individuals with a nontraditional educational background and those working for nonacademic employers. The following quotes shed some light on the feelings of these individuals.

Another factor that makes some members feel unwelcome is rooted in the politicization of topics such as climate change or a dissatisfaction with the atmosphere in a local chapter: “Our chapter fosters an environment of climate change denial, with all of the presenters being those that disagree with the latest science…This strikes me as inappropriate for a scientific organization…I very much enjoy my national membership, but plan to let my local chapter membership lapse.”

In considering the future offerings and membership of AMS, the Society’s leadership may wish to consider the following questions:

How the AMS leadership chooses to answer these questions is likely to define the composition of AMS in the years to come.