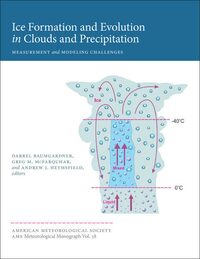 Ice crystals, with their myriad of shapes, sizes, and densities, play an important role in the formation, evolution, and subsequent impact of glaciating clouds on weather and climate. There are numerous pathways through which ice crystals nucleate, grow, and dissipate. Although many of these are understood theoretically, and have been simulated in the laboratory and cloud chambers, they are less well documented in natural clouds due to the challenges of making measurements from moving platforms in an environment that is spatially inhomogeneous and temporally unsteady, as well as difficult to sample given the high altitudes and icing potential in some such clouds. Nevertheless, the importance of ice clouds for climate and the hydrological cycle compels us to better understand ice processes through improved measurements over as broad of a temporal and geographical scale as possible.

This monograph represents a compendium of information provided by leading experts in the cloud physics community who recognized the need to compile a summary of our current state of understanding of how ice forms and evolves and of our technological capability to measure the critical properties of these ice crystals. A brief description of the material presented in each chapter is given near the end of this introduction.

In the following discussion, we touch upon the reasons that ice plays such an important role in our environment and the obstacles that have hindered our ability to further our understanding of how it forms, evolves, and interacts with other atmospheric components. This discussion serves as a prelude to what each of the monograph chapters provides in much greater detail.

a. Cloud ice and climate

The uncertain knowledge of the concentrations and shapes of small ice crystals, those with diameter D < ~100 μm, hinders progress in our understanding of the radiative properties of ice clouds. For example, Vogelmann and Ackerman (1995) suggested that radiative fluxes need to be known to within about 5% for climate studies, which means that the asymmetry parameter (g) needs to be known within about 2% to 5%. Theoretical calculations (Um and McFarquhar 2007) of g are typically larger than those derived from directional radiation or nephelometer measurements, with assumptions of surface roughness used to reduce the discrepancies (e.g., Yang et al. 2008). However, there is no closure between radiative observations and theoretical calculations because there are few observations of surface roughness at the required scales. The existing electron microscopy images of pristine crystals grown in laboratories (e.g., Pfalzgraff et al. 2010; Magee et al. 2014) show internal and external structures, surface roughness, and inclusions (e.g., air bubbles) that do alter the scattering properties; however, these types of structures have yet to be corroborated for naturally occurring ice. A recent laboratory study by Schnaiter et al. (2016) reported on the origin of small-scale ice crystal complexity—roughness, and its influence on the angular light scattering properties of cirrus clouds. It was found that significant roughness dominates the ice crystals grown in these experiments with the degree of complexity dependent on the available water vapor during the crystal growth; the applicability of these results to naturally occurring ice crystals has not been established.

There is also considerable uncertainty in the shapes of small ice crystals that affect the scattering properties. Columns (Takano and Liou 1989), Chebyshev particles (McFarquhar et al. 2002), droxtals (Yang et al. 2003), Gaussian random spheres (Nousiainen and McFarquhar 2004), budding Bucky balls (Um and McFarquhar 2011), and spheres have all been used for representing small particle shapes; however, with the exception of holography, current airborne imaging probes are unable to resolve between these shapes for D < 50 μm (McFarquhar et al. 2013). The impact on calculated single-scattering properties is large enough to affect g by up to 25% depending on the ratio of the projected area to the area of a circumscribed particle (McFarquhar and Heymsfield 1996).

In addition to understanding ice crystal scattering properties, it is critical to understand their sedimentation rates because this affects the coverage and longevity of ice clouds, and hence their radiative influence in climate models (Jakob and Klein 1999; Sanderson et al. 2008). For example, Mitchell et al. (2008) showed that varying the number of small ice crystals in 1-yr global simulations caused differences in globally averaged cloud ice water path and cloud coverage of 12% and 5.5% respectively, corresponding to changes in net cloud forcing of −5 W m−2 in the tropics, comparable to effects of CO2 doubling. Although there are existing libraries that show the dependence of crystal fall velocity on particle size for a variety of different shapes (e.g., Locatelli and Hobbs 1974; Mitchell 1996; Heymsfield and Westbrook 2010), their application in models is complicated by the fact that these idealized shapes are not representative of shapes in natural clouds. Derivation of mass-weighted fall speeds is also affected by variability in definition of particle size used in these libraries (McFarquhar and Black 2004; Wu and McFarquhar 2016) and in measured size distributions. Clearly more and improved databases, including those derived from remote sensors (e.g., Matrosov and Heymsfield 2000; Dionisi et al. 2013), are needed to better elucidate these relationships.

b. Cloud ice and precipitation

Precipitation grown through the ice phase can be much more rapid than that which grows through the warm rain process. Droplets grow by diffusion at a rate proportional to the supersaturation with respect to water, which only reaches ~1% in the most extreme cases. Ice crystals grow at a rate proportional to the supersaturation with respect to ice, which can reach up to 40% at temperatures of −40°C. Both water drops and ice crystals grow by “accretion,” for water drops by the collection of water drops by water drops (coalescence) and for ice crystals by both the collection of other ice crystals (aggregation) and by collecting water droplets (accretion). Thus, ice crystals grow to precipitation sizes much more quickly than water droplets that grow only through diffusion and coalescence. Although the central role of ice crystals in precipitation formation has long been recognized (e.g., Wegener 1911; Bergeron 1928; Findeisen 1938), better understanding of this role is challenged by the complex relationship of ice crystal morphology, fall velocity, accretion, and aggregation. This remains an area largely underinvestigated for lack of better measurements of ice crystal shape and mass.

Atmospheric ice particles play a role in the formation of over half of the world’s precipitation, yet many details about the initiation and evolution of ice particles in clouds are poorly understood. Further, the linkages between melting, evaporation, and sublimation on dynamics, critical for understanding precipitation, have not been well established.

Thunderstorm activity is the reason that there is a weak negative charge on Earth’s surface worldwide, and a net positive charge in the atmosphere. A net negative charge is brought to the surface due to cloud-to-ground lightning. The thunderstorm charge dipole originates from the physical separation of oppositely charged droplets and ice particles within the cloud. The larger ones fall under gravity and smaller ones are transported upward due to updrafts. If these particles carry negative and positive charges respectively, the result is a charged dipole.

Numerous mechanisms have been proposed to explain electrical charges on cloud particles. One of the most probable is that process by which ice particles growing at different diffusional rates collide and share charges such that the particle growing fastest charges positively. The collision rate depends on the respective fall velocities that in turn are related to the ice crystal mass and shape. The relationship between the amount of charge on an ice particle and its physical properties remains largely unknown.

High ice water content poses a serious safety hazard to aircraft operations, mainly through its impact on jet engine performance and aircraft sensor degradation. Engine rollback and flameouts occur when ice crystals melt then refreeze in the compressor (Mason et al. 2006; Lawson et al. 1998). Temperature and airspeed sensor measurements can be compromised when ice crystals clog, partially block, or melt and contaminate the sensor (Mason et al. 2006; Beswick et al. 2015). This sensor degradation has been directly linked to at least one fatal aircraft accident and is suspected in a number of others. Commercial aircraft do not have sensors that can detect and identify this situation when ice crystals are present in high concentrations. Better documentation of the characteristics of these high ice water content regions is needed both for regulatory purposes and for understanding the physical processes that produce such high ice water content regions. Observations of bulk mass, size distributions, and crystal morphology are required to characterize these environments (e.g., Strapp et al. 2016; Leroy et al. 2016).

Some of the most fundamental and complex problems in weather and climate change research today are related to the poor understanding of the basic properties of clouds and the inability to determine quantitatively the many effects cloud processes have on weather and climate. For example, the primary (ice nucleating particles) and secondary (non–ice nuclei induced) mechanisms by which ice particles form, the role of heterogeneous versus homogeneous ice nucleation at temperatures greater than −40°C, the composition of the ice nucleating particles, and the dependence of their growth on deposition, riming, and evaporation on cloud and environmental conditions have not been well established. An enhanced understanding of such issues is needed for improving the representation of cloud processes in numerical weather and climate models, and for determining their impact on the atmosphere, surface, and cryosphere. The need to improve our understanding of these process through more sophisticated models and more accurate measurements led to the idea of writing a monograph that identified the issues and put forth recommendations to resolve them.

The primary objectives of the monograph are as follows:

The monograph begins with seven chapters devoted to discussion of the scientific underpinnings of cloud ice formation and evolution. Each of these chapters begins with the theoretical aspects followed by the remaining challenges that hinder our basic understanding and limit our ability to successfully model the microphysical processes.

Ice nucleation is introduced in chapter 1 followed by chapters 2 and 3 that give a detailed description of cirrus and contrail ice. The fourth chapter provides an evaluation of the current understanding of ice fog and some of the tools that are available to study its formation and microphysical properties. Chapter 5 discusses mixed-phase clouds, probably the most difficult type of ice cloud to characterize with measurements, and chapter 6 provides a detailed description of the role of ice in the formation of precipitation. The final science-related chapter on ice processes is chapter 7, which covers secondary ice production.

Chapters 8–11 concern measurement methodology and challenges that include the uncertainties and limitations of current measurement techniques. Techniques and challenges for measuring ice nucleating particles (INPs) are described in chapter 8, followed by a similar discussion on airborne in situ measurements of ice properties in chapter 9. Chapter 10 focuses on remote sensing techniques, ground based and airborne, for measuring the properties of ice in clouds, and chapter 11 closes the monograph by providing an overview of the data processing and analysis techniques that are currently employed to evaluate in situ measurements.

All 11 chapters include a closing section that is devoted to summarizing the primary challenges that hinder our ability to better understand ice in clouds and put forward recommendations on steps that could and should be taken in the future to remove these obstacles.