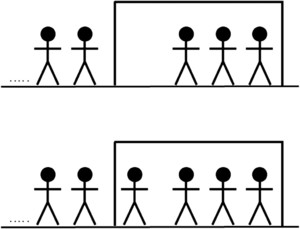 This reply addresses the use of order statistics in extreme value analysis. The author has previously proposed in this journal that the distribution-dependent estimators of plotting position in extreme value analysis should be abandoned and replaced by the Weibull formula. It was also demonstrated that the use of the wrong plotting positions has resulted in underestimation of the probability of extreme-weather events. Cook’s comments challenge these developments and defend the previously presented plotting methods. In this reply it is outlined that the Weibull formula provides the exact probability PI of nonexceedance in order-ranked data. Hence, there is no sampling error related to PI. This renders Cook’s primary arguments invalid. The specific critical comments by Cook are also replied to and are shown to be unfounded.

This reply addresses the use of order statistics in extreme value analysis. The author has previously proposed in this journal that the distribution-dependent estimators of plotting position in extreme value analysis should be abandoned and replaced by the Weibull formula. It was also demonstrated that the use of the wrong plotting positions has resulted in underestimation of the probability of extreme-weather events. Cook’s comments challenge these developments and defend the previously presented plotting methods. In this reply it is outlined that the Weibull formula provides the exact probability PI of nonexceedance in order-ranked data. Hence, there is no sampling error related to PI. This renders Cook’s primary arguments invalid. The specific critical comments by Cook are also replied to and are shown to be unfounded.

It has been proposed that the commonly used distribution-dependent estimators of these associated probabilities, the so-called plotting positions, should be abandoned and replaced by Weibull’s (1939) formula (Makkonen 2006, 2008a,b). It was shown by Makkonen (2006) that an underestimation of the probability of extreme events has resulted from the use of many other plotting positions historically, and that this has had an adverse impact on building codes and other means for optimal design against extreme-weather events.

Cook (2010) challenges these developments and claims to disprove the findings by Makkonen (2006). According to Cook (2010), “the unbiased estimators developed since 1939 are valid and provide a significant improvement in accuracy.”

It is outlined in this reply that the Weibull formula provides the exact distribution-free probability PI of nonexceedance by a random observation drawn from the population. There is no sampling error related to PI. Hence, the use of “estimators” for plotting positions is both unnecessary and misleading. The critical comments by Cook (2010) are replied to and are shown to be unfounded.

A fundamental confusion has existed for more than 50 years on the concepts of “probability” and “sample probability.” Cook (2010) makes an attempt to clarify these concepts in section 3 of his paper with poor success. He uses notations PI for the probability associated with what he refers to as an “ideal invariant process” and P for sample probability but yet denotes by P the probability defined as the limiting value of the sample relative frequency.

Since this confusion is the root of many errors encountered in extreme value analysis, the wording sample probability is not used in this paper. Such a concept is highly misleading since probability is a property of a random process and not of a sample. In this paper “sample relative frequency” and notation r are used for what Cook and many others call “sample probability” or even just “probability.”

Makkonen (2008a) pointed out that in random sampling the cumulative distribution function (CDF) of xm must be interpreted as the empirical distribution function, which is defined based on the observed relative frequency r. The mean of rL(m, n) goes to the mean of the CDF value PI(m, n) when the number L of trials of rm goes to infinity. Thus, Gumbel’s (1958) celebrated result, presented by different notations in Cook’s Eq. (9), can be interpreted as

Here m is the order and n is the number of observations in a sample that is order ranked from the smallest (m = 1) to the largest (m = n). A particular benefit of using order statistics is that PI is unaffected by the distribution.

These examples demonstrate that the nonexceedance probabilities in the two samplings are unique and depend on m and n only. They do not depend on the distribution of the variable. Furthermore, there is no error or bias related to them. The example also outlines that the argument given by Cook, that two probabilities m/(n + 1) and m/n may emerge giving a nonunique plotting position, reflects the failure to distinguish between two different random processes: nonexceedance by a random observation drawn from a sample and by a random observation drawn from the population from which the sample originates.

3. The purpose of probability plotting

The purpose of probability plotting is to estimate the CDF of a variable. The CDF is defined as follows: For every real number x, the CDF of a real-valued random variable X is given by

where the right-hand side represents the probability that the random variable X takes on a value less than or equal to x.

4. The role of sampling error

Cook (2010) refers to estimates of probability, indicating that sampling error plays a role in assessing the probability in extreme value analysis. The discussion above shows that no such role exists. When considering order-ranked data, the sampling error is related solely to the observed variable x, not to the probability of nonexceedance PI. When dealing with a known CDF one may, as a mathematical tool, fix a variable value X and treat the sample relative frequency rL as a variable, as was done by Gumbel (1958). However, this should not be confused with the concept of probability PI in order statistics of sampled data.

As will be further discussed in section 5, the probability PI required to estimate a CDF cannot be derived from Cook’s (2010) nonadditive transformations such as the “mean reduced variate,” “sample return period,” and “expectation of the return period.” Cook’s (2010) discussion on them and his related figures are, therefore, irrelevant to assessing a CDF based on order statistics. The confusion discussed above is also reflected in Cook’s Eqs. (16)–(18) where P is used instead of the probability PI that was used by Gumbel (1958) in making the transformation to the reduced variate y = −ln(−lnPI).

Cook (2010) states that in his Fig. 6 “the mean reduced variate is plotted against various estimates of probability on conventional Gumbel axes.” The concept of “estimate of probability” is meaningless, however, since, in order statistics, the probability PI is given by Eq. (1) and is not to be estimated.

A reply is given in the following to each of the specific numbered comments by Cook (2010):

The extreme value analysis got on the wrong tracks, starting from its invention a century ago, when PI was set to m/n. It was soon realized that this method cannot be used at the tails of the distribution. To deal with this problem, an “estimator” of PI was proposed as (m − ½)/n by Hazen (1914). Subsequent to this, many other “estimators” were proposed, ending up with numerical methods such as those advocated by Cook (2010).

This unfortunate state of affairs arose because it was not observed at the time that m/n is not the probability of exceedance by a random observation in a population, but by that in a sample (see example in Fig. 1). As outlined in this paper, the correct probability PI = m/(n + 1) should have been used in the first place, making all “estimators” unnecessary. This correct formula was proposed by Weibull (1939) and later by Gumbel (1958), but they did not justify it appropriately. Gumbel (1958) derived the result E(rL) = m/(n + 1) and recommended it as the plotting position but did not identify it as PI. His derivation was based on considering rL as a variable with a fixed value of x. This way of thinking subsequently initiated several erroneous methods in which rL is confused with PI with the consequence that PI is considered as a variable to be estimated.

As a consequence, all but those estimates of the probability of natural hazards that have been made by Eq. (1) are incorrect. More than 10 erroneous plotting methods have been presented over a century (Makkonen 2008b). The practice of using plotting methods in building codes and other regulations has varied, so that the errors have found their way into statistics of extremes in many, but not all, countries. Only a few significant text books have recommended the correct plotting formula to be used (Gumbel 1958; Madsen et al. 1986, Coles 2001).

The paper by Makkonen (2006) and more recent papers (Makkonen 2008a,b) were attempts to direct the extreme analysis to the correct path by showing why the plotting of x must be done by PI and that PI(m, n) = m/(n + 1). Cook’s (2010) comments advocate the widely practiced erroneous methodology and represent the conventional misunderstandings of the use of order statistics in extreme value analysis. In this reply, all of his critical comments on Makkonen (2006) have been shown to be unfounded and the correct methodology of this important issue was outlined.