Histograms of hourly surface temperature at the Nerima and Kumagaya stations. The histograms were calculated from the observations (black), CTL_p2 (red), LAND_2070s (green), and PGW-multi (blue). The model results were calculated using the data on the nearest grid cell to each AMeDAS station. 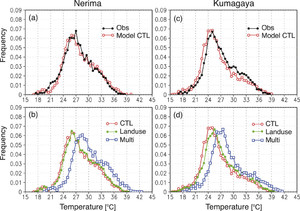 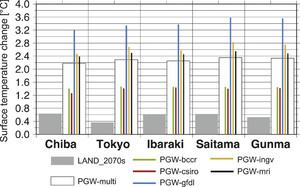 There were two incorrect figures in Adachi et al. (2012). In Fig. 8, the curves were mistakenly extended to include those temperature classes that contained occurrence frequencies of 0. In addition, because of a production error in Fig. 9, the black borders around the white bars (PGW-multi − CTL_p2) were omitted from the final published figure. The staff of the Journal of Applied Meteorology and Climatology regrets any inconvenience this latter error may have caused. The corrected figures appear below.