Scatterplot of radar vs gauge accumulation values for 25 high-reflectivity gradient cases. The one-to-one line (dashed line) is the line of perfect correlation. The G–R pairs (data points) are all of the gauge–radar pairs in which both the gauge and radar accumulations are greater than 0.03 in. (0.076 cm). Linear fit (solid line) is the linear regression line with the correlation coefficient (R) specified in the key.

Same as Fig. 3, except for 18 low-reflectivity gradient cases. 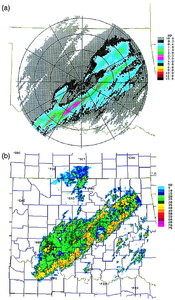 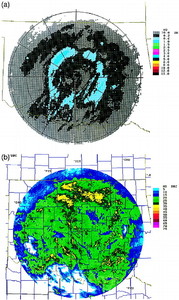 Storm total rain accumulations from 43 rain events from 10 radar sites were analyzed. Storm total gauge amounts were compared with radar-estimated rainfall amounts at a single data file “bin” collocated above the gauge for similar time intervals. There were 1639 radar versus gauge comparisons. These rain events were stratified into two precipitation types: 25 high-reflectivity horizontal gradient storm events and 18 low-reflectivity horizontal gradient events. These procedures provided a dramatic improvement over previous WSR-88D radar–gauge comparisons (Manion and Klazura 1993) that used the standard graphics display of the Storm Total Precipitation product (Klazura and Imy 1993) with only 16 precipitation accumulation data levels and approximately 1-in. resolution.

This study was conducted in a semiquantitative manner to assess the performance of the WSR-88D precipitation accumulation algorithm in a general sense. It was not meant to be a rigorously objective scientific and statistical experiment. However, the strong differences that emerged between high-reflectivity gradient and low-reflectivity gradient cases suggest that reasonably high confidence can be placed on the overall conclusions.

Standard operational quality control procedures were followed. Quality control of the radar reflectivity data is described in Fulton et al. (1998). An attempt was made to perform a basic level of quality control of gauge–radar pairs by excluding any nonraining pairs, that is, any pairs in which either the gauge or radar rainfall was below a minimum threshold (0.03 in. was used as threshold). For example, this would remove any pairs in which the gauge received rain but did not record it due to hardware problems or inaccurate timing and location specifications (e.g., a mismatch of radar and gauge clocks or errors in gauge latitude–longitude locations). Also, the pair would be excluded if the radar overshot the rain clouds at long ranges, while the gauge recorded rainfall properly.

The low-reflectivity gradient category is characterized by fairly widespread reflectivities generally 25–40 dBZ with weak reflectivity gradients. The radar-estimated storm total precipitation products indicate weak gradients and areas of maximum precipitation, which are generally less than five times greater than the general accumulations over the area. Figure 2 illustrates an example of a low-reflectivity gradient case as depicted on the storm total precipitation product (Fig. 2a) for the Oklahoma City WSR-88D for a 9-h, 53-min duration on 29 April 1994, and the base reflectivity product (Fig. 2b) for a radar scan within this time interval. The higher rainfall accumulations depicted in the ring from about 30 to 60 n mi (Fig. 2a) may be due to enhanced reflectivities related to brightband effects.

For this study, the radar bin that was selected to be compared with each gauge is the bin collocated with the gauge (closest to the latitude and longitude of the associated gauge) and located in the center of the 5 × 5 matrix of bins.

A valid gauge–radar pair is defined as a pair in which both the gauge and radar accumulation values are 0.03 in. or more. Smaller accumulations were omitted in order to remain generally consistent with the concept used by the radar bias calculations in the precipitation adjustment algorithm (Fulton et al. 1998; NOAA 1991) and to reduce errors caused by the minimum precipitation threshold of the rain gauge.

Valid gauge–radar pairs were converted into G/R ratios by using the method defined in Eq. (1):

where N is the number of gauge–radar pairs, Gi is the ith gauge measured storm total rain amount, and Ri is the radar-estimated storm total rain amount for the 1° × 2 km bin collocated with the ith gauge. The G/R ratio is a mean radar bias factor defined as the sum of the observed amounts at all gauges with rainfall divided by the sum of the radar estimates for those gauges (Wilson and Brandes 1979). A bias factor greater (less) than 1.0 indicates that the radar has underestimated (overestimated) the rainfall. The G/R ratios were not computed unless there were at least nine valid gauge–radar pairs (i.e., both had values of at least 0.03 in.). Nine pairs were subjectively selected with the intent of making sure a reasonable sample size existed.

Brandes et al. (1999) obtained results fairly similar to the high-reflectivity gradient cases discussed above. They compared gauge accumulations with WSR-88D estimates for three precipitation events near Denver, Colorado (June–July 1996), and for nine events near Wichita, Kansas (May–June 1997). The precipitation types in their study were convective storms, most of which were attended by stratiform rain areas. Their analyses procedures were slightly different from those used in the current study. They restricted their comparisons to only gauges located 20–90 km from the radars, only considered reflectivities from the lowest elevation scan (0.5°), and used the average accumulation from several radar bins rather than considering only the bin collocated with the gauge. Their mean G/R values were (1.07) (132 G–R pairs) and 1.05 (377 G–R pairs) for the Denver and Wichita area studies, respectively. These numbers are much closer to the 0.88 for the high-reflectivity gradient cases than the 2.23 for the low-reflectivity gradient cases. This should not be surprising since their storms were convective and would be expected to display high-reflectivity gradient characteristics.

As shown in Table 1, the Oklahoma City (OKC) and Boston (BOS) cases were evenly split between high-reflectivity gradient and low-reflectivity gradient cases;Oklahoma City had five in each category, and Boston had four. In Table 3 the G/R ratios (in ranked order) and means of these values for each of these two sites for each precipitation-type category (as listed in Table 2) are shown.

These values are in good agreement with the trends indicated for all the cases lumped together. Table 3 provides evidence that the differences observed between high-reflectivity gradient and low-reflectivity gradient cases are probably not primarily due to differences of radar hardware or calibration characteristics between WSR-88Ds. Brandes et al. (1999) concluded that for well-maintained radars, the storm-to-storm bias variations due to radar hardware calibration should be small and suggested that differences have a meteorological origin.

a. Variations with distance from radar

The G/R values were computed using Eq. (1) for all cases combined within each precipitation-type classification subdivided into four range categories. The range categories selected were 0–49.9, 50–99.9, 100–149.9, and 150–230 km. These range intervals were subjectively selected to determine general trends of range effects.

For high-reflectivity gradient cases, Table 4 exhibits radar underestimation at the nearest ranges and radar overestimation at middle ranges, which decreases with range to a near-zero bias at the farthest range interval.

b. Radar versus gauge scatterplots

Figures 3 and 4 depict comparisons between the radar-estimated accumulations and the corresponding rain gauge amounts for all cases in the high-reflectivity gradient and low-reflectivity gradient categories, respectively. If an exact match occurred, the data point would be plotted along the one-to-one line. However, both radar and rain gauge accumulations could be perfect, and the ratio still could be different from 1.0, since the two sample different processes. Thus there is an uncertainty bound associated with each plotted point due to sampling and other estimation effects. Therefore, the scatterplot, and associated linear regression line and corresponding correlation coefficient will have errors related to these uncertainties and should be viewed as displaying general tendencies and trends rather than precise statistical characteristics.

For the high-reflectivity gradient cases (Fig. 3), the linear regression line is fairly closely aligned with the one-to-one line with only slight underestimation shown and a reasonably good correlation coefficient of 0.74. However, the scatter of data points on either side of the one-to-one line still appears fairly substantial.

The low-reflectivity gradient cases (Fig. 4) exhibit significant underestimation by the radar relative to the gauges. Although the correlation coefficient associated with the linear regression line is a fairly low 0.44, the vast majority of data points lie below the one-to-one line, giving strong evidence that the radar underestimated rain amounts quite consistently.

Rain gauge measurements were compared with radar-estimated storm total precipitation for 43 rain events that occurred at 10 locations. Gauge-to-radar ratios (G/R) were computed for individual cases and groups of cases.

A possible cause for the underestimation is the typical reduction of reflectivity with increasing altitude and the radar beam overshooting the rain clouds (lack of detection) at far ranges that is most evident during cool seasons that are dominated by shallow, stratiform rain systems (Fulton et al. 1998). It is likely that many, and perhaps most, of the 18 low-reflectivity gradient cases in this study were primarily stratiform rain systems, although this was not verified via analyses of vertical structures. Joss and Waldvogel (1989) suggested that significant errors in precipitation estimates can occur when the radar beam scans at higher portions of precipitating systems because vertical reflectivity gradients can be substantial.

This underestimation problem can be exacerbated when the WSR-88D precipitation algorithm incorrectly interprets valid radar echoes in the first tilt (0.5° elevation angle) as ground clutter, subsequently chooses the second tilt (1.5° elevation angle) to compute precipitation accumulations, and routinely uses the third and fourth tilt (2.5° and 3.5° elevation angles) near the radar. Smith et al. (1996) reported significant underestimation of rainfall within 40-km range of the WSR-88D radar due to bias in reflectivity observations at higher tilt angles.

Occurrences of radar overestimates may have been related to high reflectivity returns from melting ice, brightband effects in stratiform systems, and hail from convective systems. Brightband effects probably were responsible for improving the radar underestimates in the second range interval (50–99.9 km) for the low-reflectivity gradient cases. Other possibilities for radar overestimates are anomalous propagation (AP) of the radar beam. Smith et al. (1996) concluded that bright bands and AP can lead to systematic overestimation of rainfall at intermediate ranges.

A potential cause for either radar underestimation or overestimation is improperly calibrated radars. A difference of 4 dBZ corresponds to an approximate doubling or halving of the radar accumulation estimates. For instance, the corresponding precipitation rates from reflectivity measurements of 40 dBZ and 44 dBZ are 12.24 mm h−1 (0.48 in. h−1) and 23.63 mm h−1 (0.93 in. h−1), respectively, for the WSR-88D default Z–R relationship.

G/R ratios for high-reflectivity gradient (HRG) and low-reflectivity gradient (LRG) precipitation types in four range categories.The G/R ratios were computed using Eq. (1). Shown are the number of gauge–radar pairs considered in computation of G/R. Number of cases that contributed gauge–radar pairs out of a total possible of 25 HRG and 18 LRG precipitation events are shown in parentheses.