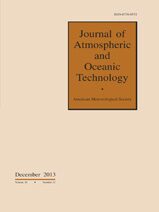 Sample time series of variables measured by the ScanEagle Flux payload, at an altitude of 32.4 ± 3.1 m AGL over the Potomac River on 13 Apr 2012, showing (a) vertical wind; (b) water vapor concentration, as measured by the krypton hygrometer; and (c) temperature, as measured by the optical sensor (low-pass filtered with a 4-Hz-cutoff Butterworth filter). Positive correlation between vapor concentration and vertical wind can be seen (most notably in the times outlined in gray rectangles), implying positive vertical transport of water vapor and therefore positive latent heat. (d) Scatterplot of turbulent water vapor against turbulent vertical wind. Turbulent vapor flux can be calculated with the mean of the products of these quantities; shown is that calculated from the 90-s segment shown in (a)–(c). Plus and minus symbols show the sign of contribution to the flux within each quadrant. Water vapor flux is also quantified using integrated cospectra in Fig. 18b (see section 4c). Correlation between temperature and vertical wind is less pronounced, corresponding to the small and variable fluxes seen in Fig. 18c.