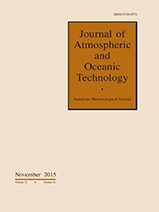 Daily average, 8-day average, and monthly average LST of the Tibetan Plateau in January and July of 2013.

Leakage and false alarm rates of the existing VIIRS and new tests. 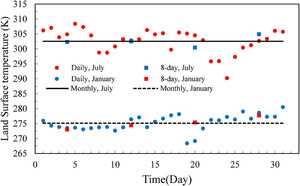 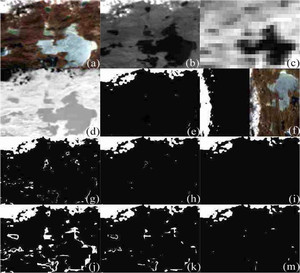 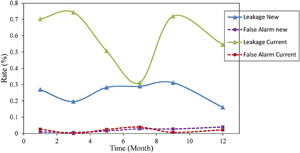 a. Algorithm and thresholds

Since cirrus clouds are usually distributed at high altitudes, their temperatures are very low (Gao et al. 2002; Ackerman et al. 1990). Therefore, a test could be used to enhance the results of cirrus cloud tests. In general, the obtained by sensors should be where is the brightness temperature of a cirrus cloud and is the brightness temperature of the land surface. The greatest difficulty when using the auxiliary test is obtaining a simple and consistent threshold that is significantly related to . One possible threshold option is the land surface temperature (LST) values obtained from ground stations. However, the number of ground stations is limited, and LST distributions can vary significantly among different regions. Thus, the choice of LST data obtained from the ground stations will affect the accuracy of a cirrus cloud test. In this study, a multiday average land surface temperature from MODIS products was used as the threshold in this study.

As mentioned above, when cirrus exists, the obtained by sensors should be . If we used the monthly mean LST to replace , we have . However, monthly mean LST cannot be used directly as the threshold, because it is not completely equal to for every day in a month (Xia et al. 2014). Therefore, it should be adjusted before being used. In this study, we used to correct for the difference between and LST, so the can be presented as . Combining the current 1.38-μm cirrus test and , the improved cirrus algorithm is as follows:

In this equation represents the 1.38-μm channel reflective value obtained by the sensor, represents the threshold of the reflectance test, represents the LST obtained from the MODIS/VIIRS monthly average product, and represents the temperature correction value. In this study, by analyzing more than 100 VIIRS granules over the Tibetan Plateau from 2013 to 2014, we obtained that the value of was 10 in the winter and 8 in the summer, and that was equal to 0.008 for every season.

As shown in Fig. 2, the accuracy of the new cirrus cloud test was relatively high over the lake and bare land for different threshold values. The bare land and frozen lake did not appear to be misclassified. Although the reflectance value of the bare land was approximately 0.1, the proposed test did not misinterpret the bare land as cirrus clouds when = 0.01, for the reason that can prevent the misclassification of clear surface pixels as thin cirrus pixels, as shown in Figs. 2g,j.

a. CALIOP data and processing

The VFM data product describes the vertical and horizontal distribution of the cloud and aerosol profiles observed by the CALIOP, and the vertical and horizontal resolution of the VFM data varies as a function of altitude above mean sea level (Hunt et al. 2009). Usually, each profile was divided into 545 layers, and every layer was characterized by a single 16-bit integer, with the various bits in the integer representing flags that describe the aerosol and cloud information within the layer; for example, bits 1–3 specify feature type (cloud, aerosol, surface, etc.) and bits 10–12 specify feature type (cloud, aerosol, etc.).

Besides, considering the existence of multilayer cloud means noncirrus cloud may locate higher than cirrus. In this situation, the VFM data will indicate the existence of cirrus thin, but the VIIRS and MODIS cannot sense the information below the cloud top and this will lead to error. As a result, only the top-layer cloud information of the VFM data was cirrus and the continuous distribution of the cirrus layers was no less than 5; the pixel of this VFM data would be recognized as cirrus.

The VIIRS and MODIS swaths of the Tibetan Plateau region from 1 January 2014 to 31 January 2015 were selected to validate the accuracy of the new test. The method used to obtain the matching datasets of CALIOP, MODIS, and VIIRS for the same geographical position was proposed by Nagle and Holz (2009). The imaging interval between CALIOP and MODIS was within 15 min—the same as that between CALIOP and VIIRS.

The thresholds used in the VIIRS cloud mask (VCM) 1.38-μm cirrus algorithm (Hutchison et al. 2012; Baker 2014) are functions of the total precipitable water (TPW). If the TPW is less than the minimum TPW, then the cirrus test is not performed. In the Tibetan Plateau region, the TPW during the winter is often too low to perform the VIIRS 1.38-μm cirrus test with reasonable thresholds, leading to significant leakage. However, the proposed test functioned well under these conditions, as shown in Table 1.

The MODIS cirrus test uses constant thresholds for different land types (Frey et al. 2008). As shown in Table 1, the existing MODIS test, with a constant test threshold of 0.04, yielded a low leakage rate but a high misclassification rate of 16.3%. Compared to the existing VIIRS and MODIS tests, the proposed test detected 31.7% more cirrus clouds than the VIIRS test and yielded 14% fewer false alarms than the constant MODIS test. In fact, because of the LST data used in the test with a resolution of only 5 km, the number of misclassifications yielded by the VIIRS test slightly increased.

Although the existing VIIRS cirrus cloud test algorithm is very effective when there is a suitable amount of TPW, some areas with low vapor content during the winter, such as the Tibetan Plateau region, might not meet this condition. The proposed test detected 31.7% more cirrus clouds than the existing VIIRS test without any obvious increase in misclassifications. In addition, the proposed test yielded 14% fewer misclassifications than the MODIS test. However, since the proposed test was dependent on the LST, it might not perform adequately for LST values less than 260 K.