Drawing of a signal station mast with optical signals. (left) Two flags to indicate the expected change of wind direction. (right) A barrel and a cone indicate the warning of severe storm.

Positions of the signal stations with weather observations during the period 1877–1999 of the German Naval Observatory, Hamburg.

Distribution of signal stations and digitized data during the period 1875–1999. The bars show the digitized data and the asterisks the potential of data.

Scan of an original sheet of a journal of the station Dornbusch for January 1910. The even rows contain the following meteorological information: date, wind direction and wind force, weather, sea state, precipitation, and weather remarks. 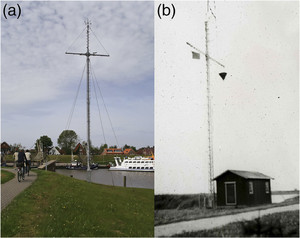 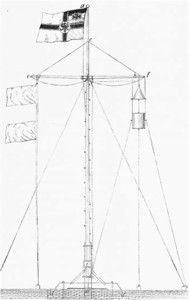 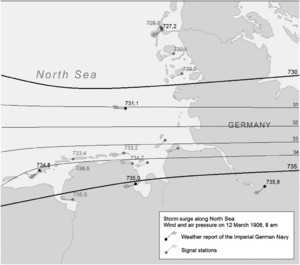 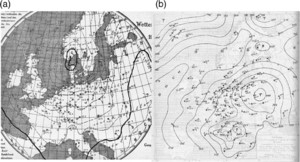 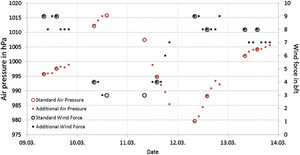 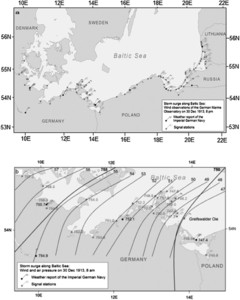 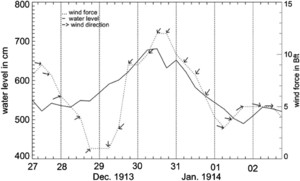 At the German Meteorological Service in Hamburg, handwritten journals of meteorological observation data of 164 signal stations exist that were digitized. These data contain long-term time series of up to 125 years for the period 1877–1999 and allow for studies of regional meteorological conditions with greatly improved spatial resolution. Wind and air pressure data of selected signal stations along the German Bight and the southern Baltic Sea coast show a spatial data homogeneity that allows for an improved description of two historical storms, in 1906 and 1913. This is the first presentation of signal station data.

At the German Meteorological Service in Hamburg, handwritten journals of meteorological observation data of 164 signal stations exist that were digitized. These data contain long-term time series of up to 125 years for the period 1877–1999 and allow for studies of regional meteorological conditions with greatly improved spatial resolution. Wind and air pressure data of selected signal stations along the German Bight and the southern Baltic Sea coast show a spatial data homogeneity that allows for an improved description of two historical storms, in 1906 and 1913. This is the first presentation of signal station data.

The marine weather office of the German Meteorological Service [Deutscher Wetterdienst (DWD)] in Hamburg houses an extensive archive of historical handwritten journals of weather observations. It includes marine data records from ships as well as land stations in many parts of the world, especially from former German colonies (Kaspar et al. 2015).

Recently, a considerable number of original observation sheets of stations along the coast of the German Bight and the southern Baltic Sea was found. These stations, called signal stations (or storm warning stations), were operated by the German Naval Observatory (Deutsche Seewarte) along the German coasts for warning sailors near the coasts of gales and storms by optical signals. In view of the lack of instrumental observation data in the North and Baltic Sea areas before the Second World War (WWII), the signal station data represent an encouraging opportunity for regional historical storm studies in this region.

In the following the function of the signal stations is explained and an overview of the observed data is given. Using wind data reported at these stations, two regional storm events, one in the North Sea area in 1906 and one in the region of the southern Baltic Sea in 1913, are analyzed.

a. Function and installation of signal stations

Since 1882 at some signal stations night signals were set. A red light warned of a storm. Since 1912 a combination of white and red lights warned of a strong storm. A green light indicated strong wind.

For verification of the storm warnings, workmen performed meteorological observations and measurements at the signal stations. The observations were done typically three times a day. Once a month observation data sheets were sent back to the Deutsche Seewarte in Hamburg, where annual journals of the data were prepared. These data did not enter the synoptic analysis and synoptic maps of the weather service. Thus, the data represent a database that is completely independent of routine historical weather maps. The data were not used for weather analysis or forecast. They complement the conventional data archive.

b. Meteorological data of signal stations

The archive of signal stations contains about 800 handwritten journals with wind and weather observation data. Figure 5 shows a scan of an original journal sheet. It shows the observed data of the first 5 days of January 1910 of Dornbusch station at the Baltic Sea coast. There are nine time series with data of more than 100 years. All in all, there are 44 time series longer than 60 years.

All sheets are scanned, and the data are manually digitized to protect the handwritten data from physical decomposition and to allow for possible comprehensive scientific analysis. At present about 30% of the data are digitized, also pictured in Fig. 4.

All the records contain values of estimated wind force and wind direction, as well as weather conditions and visibility. Additionally, prior to 1940, sea level pressure (SLP), precipitation, and in some cases sea state have been recorded (Table 1). All stations reported three times per day [0800, 1400, and 2000 Middle European Time (MEZ)]. In the case of storm warnings, the frequency of air pressure measurements was increased irregularly.

List of all observed variables with unit, report time [in local mean time (LMT)], and period.

In the following two case studies, two storms associated with significant surges, are analyzed using the signal station data. The first case study is a storm in 1906 at the coast of the German Bight, and the second case study is the storm in 1913, which occurred in the region of Rügen and Usedom, Germany, in the southern Baltic Sea part. Note that the data are quality controlled by a checking routine, developed at DWD, that searches for potential errors in databases. The quality checking routine starts with formal checks, followed by climatological, temporal repetition, and consistency checks.

In addition to the signal station data, other data were used for the analysis of these storms and their surges. First, synoptic maps of the weather forecast of the Imperial German Navy are used. The maps include isobars, wind force, and wind direction information over Europe. Second, the sea level data of the Water Level Office of the Bundesamt für Seeschifffahrt und Hydrografie (BSH) of the station Greifswalder Oie are used. The location of station Greifswalder Oie is 54.25°N, 13.92°E (see Fig. 9b).

The storm surge on 12 March 1906, which occurred in the German Bight, offers the highest known historic water level in this region up to this date with a water level of 4.06 m MSL during this storm surge on the isle of Borkum (http://www.heimatverein-borkum.de/stoerm-boerkum/). Figure 6 illustrates the wind observations. The black vanes signalize the wind observation of the six weather stations of the Deutsche Seewarte. The gray vanes represent the newly digitized data of 14 signal stations. The signal station data nearly tripled the monitoring network at the coast. The streaks and triangles at the vanes display wind forces up to 10 Bft, which indicates a severe storm. The wind directions and wind forces reported by the signal stations are consistent with the six weather station data.

The synoptic situation on 12 March 1906 is shown on the weather map of the Deutsche Seewarte in Fig. 7a. This weather map was created on the basis of the weather report data; the station data were not entered on this historical map. A low pressure area was located north of Denmark. A low pressure area south of Norway leads to westerly wind directions at the coast of the Rügen and Usedom region. Also, the dominant wind direction of the signal station data, as well as the routine observations, is westerly.

The air pressure data of the signal stations (Fig. 6) allow for adding isobars in a resolution of 1 mmHg to the original 5-mmHg isobars of the weather report in the southern German Bight. The black lines show the original isobars, and the gray lines show the isobars based on signal station data. The crossed air pressure data were not considered for the isobars depending on signal station data. However, there is yet a sufficient number of data for getting a higher resolution of isobars.

Figure 8 shows the trend of the SLP and the observed wind force during 9–14 March 1906 at station Borkum. The quadrates describe the available standard observations two times a day. Especially in stormy situations the spatial observation density is raised (dots), and a more detailed course of events can be described by adding the station data.

We conclude that the signal station wind data at the German Bight region are well suited for the analysis of extreme wind events and that the air pressure data are useful for analyzing the air pressure situation during this extreme event.

The storm surge, which occurred on 31 December 1913, caused serious damage to the landscape and infrastructure in the region of Rügen and Usedom (von Storch et al. 2015). This storm surge was among the highest reported water levels with 2.30 m MSL in this region, having been exceeded only by the storm surges in 1872 and 1904 (Rosenhagen and Bork 2008).

The maritime meteorological data from 27 December 1913 to 2 January 1914 are shown in Fig. 10 for the station Greifswalder Oie. They describe the passage of a low pressure area on 29 December 1913. The chronological sequence of wind direction and wind force at Greifswald Oie confirms also the movement of the low pressure area. The water level consistently rose up to 1.8 m MSL on 30 December 1913 at this station.

In this paper we present newly digitized historic meteorological observation data of the Deutsche Seewarte along the coast of the German Bight and of the southern Baltic Sea from 1877 to 1999. We show that wind data from signal stations are sufficient for the descriptions of historic storm events. The signal station data expand the monitoring network at the North and Baltic Sea coasts, which leads to a higher resolution of observation data along the coast in this region for the entire twentieth century and the last decades of the nineteenth century. Also the data could be useful to improve datasets of reanalysis.

While we found that the data are mostly spatially homogeneous during our events, the issue of homogeneity over longer times is more complicated. First, tests indicate the presence of temporal inhomogeneity, but more analysis is needed to determine the extent of the problem and options for correcting it. Another task for the future is finding out whether the practice of coastal signal stations was implemented in other European countries and possibly in European overseas colonies.1

A first mention of a “signal station” for the former German colony of Tsingtao in China (now Qingdao in Shandong) has been detected.