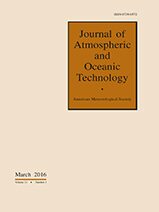 Cruise maps for the ship observations used in the case studies. (a) A representative track by the M/V Oleander between Bermuda and New York. (b) Mar Mostro VOR 2011–12 race legs; race began at Alicante and officially ended at Galway (final two Mar Mostro legs not used and not shown). A broken mast during leg 1 resulted in a break in data between legs 1 and 2A. (c) Mar Mostro legs 2B and 3A, which were confined to the Persian Gulf. (d) Gulf of Mexico SAMOS vessel tracks from 1 Nov 2009 to 31 Oct 2013 showing available observations within the GoM-HYCOM (blue box) and the NGoM-HYCOM (red box) domains. Note that not all data along these tracks are used in the analysis (see text).

Temporal distribution of SAMOS data between 2010 and 2013, showing that cruises in the Gulf of Mexico primarily occur between March and November annually.

Comparisons of seawater velocity vectors at the 75-m depth between the GLB-HYCOM (cyan) vs Oleander (black) for the cruises ending (a) 18 Nov 2007 and (b) 31 Mar 2008. Velocity vectors are plotted at every 10th point along the Oleander track and overlay the cruise-averaged GLB-HYCOM SSH. SSH is contoured every 0.1 m with the magnitude noted by the color bar.

Gulf Stream core (a) latitude, (b) longitude, (c) speed, and (d) direction identified from the GLB-HYCOM (black) and the Oleander (gray) 75-m velocity data for 33 Oleander cruises, with the mean differences annotated (for GLB-HYCOM − Oleander).

Difference plot of (GLB-HYCOM − Mar Mostro) for SST from leg 8 of the Mar Mostro race taken during VOR 2011–12 (plotted along track). Leg 8 originated at Lisbon, Portugal, and officially ended at Lorient, France, but because of domain limitations for the GLB-HYCOM analysis used herein, our analysis omits the terminating portion of this leg.

Individual cruise tracks (a) from SAMOS research vessels from which underway salinity data are compared to the global (¾°), GoM (⅜°), and NGoM (⅝°) HYCOM for (b) 17 Sep 2010, (c) 8 Apr 2011, and (d) 2 Oct 2011. Sample number represents sequential points along the cruise tracks; the start points and endpoints for the samples are marked by “O” and “X”, respectively. 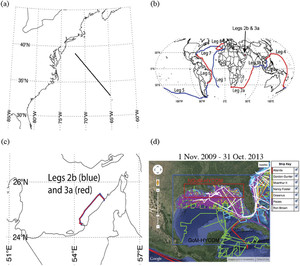 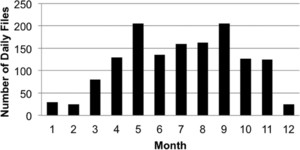 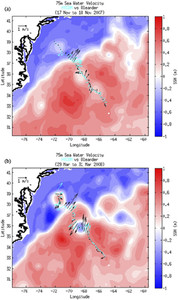 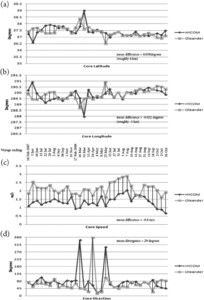 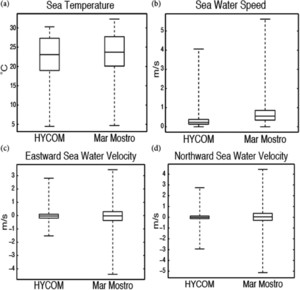 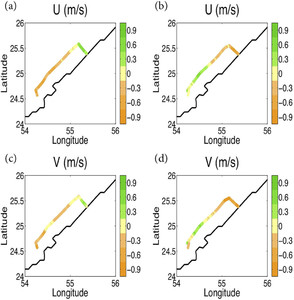 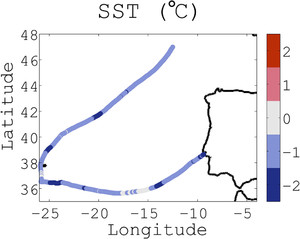 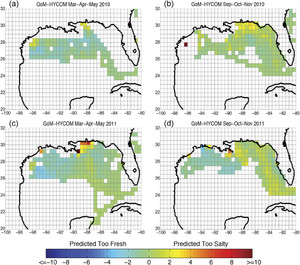 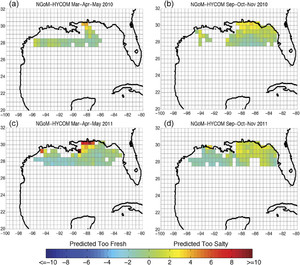 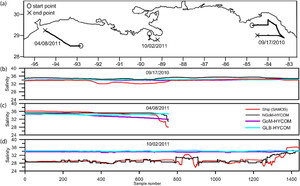