Full-resolution 1 Hz (a) temperature and (b) salinity profile 86 from SOLO-II Argo float with WMO number 4902354 that reveals the effects of conductivity dynamic errors on salinity. The alignment error manifests as a spike at 45.5 m and the cell thermal mass error manifests as lag in salinity response, such that practical salinity is reduced above base of the mixed layer at 45.8 m.

Comparison of dynamic corrections to stratified tank data as determined in Johnson et al. (2007) (J08), Martini et al. (2019) (M19a), Johnson (2020) (J19), and this paper (M19b) against the uncorrected profile (black lines) and the idealized practical salinity (gray). Following Johnson (2020) the idealized practical salinity is an error function model. Shown are (a) the salinity profiles, (b) the practical salinity error, and (c) the cumulative practical salinity bias. The salinity error is the difference between each profile and the error function model. The cumulative bias is the cumulative sum of the error normalized by the net change in salinity over the gradient. If the cumulative bias does not return to zero, the correction is biased. Corrections from this paper are shown for cases of large τCTM and large α to illustrate their effect on the distribution of error within the profile, which must be considered when bin averaging. An example 2-m bin is denoted by the gray box in each panel.

Comparison of dynamic corrections to practical salinity using in situ data from SOLO-II Argo float with WMO number 4902354. Plotted are (a) temperature and (b) practical salinity profiles with alignment and cell thermal mass corrections from Johnson et al. (2007) (J08), Martini et al. (2019) (M19a), Johnson (2020) (J19), and this paper (M19b) applied. The Johnson (2020) correction is consistent with the methods in the paper, where the cell thermal mass correction is applied before aligning temperature and conductivity. 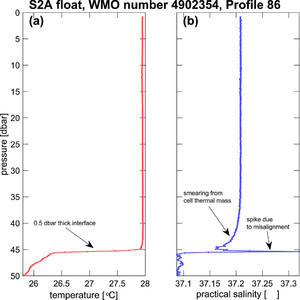 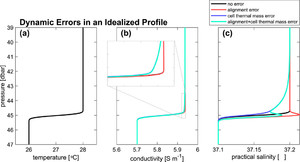 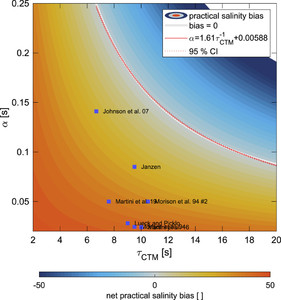 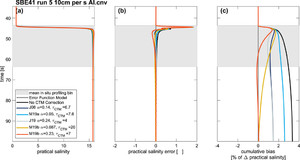 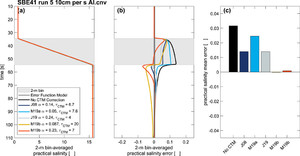 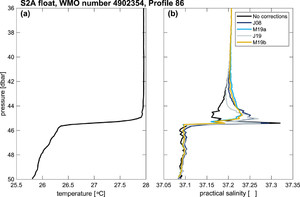 In this response we will do the following:

In Johnson (2020), the optimization procedure used to determine the cell thermal mass correction set the width and center of the salinity gradient to be unconstrained. However, these variables can be estimated a priori using conductivity. Conductivity is a function of both temperature and salinity. In the extreme artificial conditions of the stratified tank, the change in salinity accounts for more than 80% of the conductivity signal. This is in contrast to observations in the ocean, where temperature accounts for more than 80% of the conductivity signal. Therefore, the width and location of the salinity interface can be well described by the conductivity profile, which is done in Martini et al. (2019) and this paper.

The Johnson (2020) optimization is truncated before the conductivity cell reaches a steady state. Examination of the three profiles made in the stratified tank shows that at 5 times the cell thermal mass time scale (the final salinity value as chosen by Johnson 2020) the conductivity is still increasing, while the temperature is not. This indicates that the temperature of the conductivity cell has not achieved equilibrium and calculated salinity still contains cell thermal mass error. The optimization will then result in a salinity profile that is always fresh of true. Furthermore, in all three profiles the conductivity in the bottom layer never completely stabilizes such that any optimization procedure that uses the profile data will always be biased fresh. We recognize that this is a limitation of the tank data, and therefore empirically pick the time of the maximum salinity and optimize until that salinity state is reached.

We argue that these three choices lead to results that are optimized to reduce the net variance against a poorly constrained statistical model that does not accurately represent physics (Figs. 1b,c in Johnson 2020). This ultimately results in more bias and error when applied to data outside of the stratified tank experiment as shown in section 5. However, pairing the error function (Johnson 2020) with physically realistic constraints on salinity (Martini et al. 2019) produces a more realistic model of the dominant physics in the tank and the conductivity cell. Optimizing against this model reduces the bias associated with both methods and produces improved corrections for in situ data.

3. Effect of alignment and cell thermal mass errors in situ

The effects of dynamic errors on Argo CTD data are most easily observed in the raw, full-resolution 1 Hz temperature, salinity and pressure data taken by the SBE 41CP. SOLO II floats deployed by the Scripps Institution of Oceanography regularly return data at this resolution from 0 to 50 m depth to study upper-ocean physics. These profiles capture the base of the mixed layer, which often features a large temperature and salinity gradient (Fig. 1). Like the stratified tank, large vertical gradients found in situ amplify dynamic errors. In the example here, the effect of the superposition of alignment and cell thermal mass errors and how they manifest as two distinct features are shown. Alignment error, which is the temporal mismatch between temperature and conductivity error, produces a salinity spike within the interface at a depth of 45 dbar. Cell thermal mass error, which is an effect of the temperature difference between the seawater and the conductivity cell glass, creates a lagged response that manifests as decreased salinity nearly 10 dbar into the mixed layer.

The error function method presented by Johnson (2020) is used to determine the correction coefficients for cell thermal mass.1 This method produces a set of solutions where α × τCTM equals a constant (Fig. 3). For profiling speeds of 0.05, 0.10, and 0.15 m s−1, α × τCTM = 1.64, 1.61, and 1.49, respectively. The consistency between these values indicate the error function method is robust; however, a second set of conditions is needed to determine the optimal α and τCTM pair.

Although the set of solutions minimizes the net bias over the gradient, choosing the incorrect set of α and τCTM can still lead to bias when the profile data are bin averaged (Fig. 4). Choosing an α that is too large results in spikes isolated to a single bin. Choosing a τCTM that is too large results in bias smeared across multiple bins. Thus, there are multiple metrics that can be used to determine the optimal coefficients. In the spirit of the prior analysis in Martini et al. (2019), we find the α and τCTM pair that minimizes the overall bias in binned data. Other choices could be a pair that constrains error to a single bin or reduces the magnitude of the largest salinity spike.

Binned profiles equivalent to those telemetered from Argo floats are generated by running a 2-m boxcar filter over the uncorrected and corrected salinity profiles in order to produce all possible permutations of the binning algorithm (Fig. 5a). Because the numerical correction is only a first-order approximation of the cell thermal mass effect and the optimized coefficients are determined by reducing the net bias over the entire profile, there is no combination of α and τCTM that will result in zero error for every bin (Fig. 5b). Nonetheless, minimizing the average practical salinity error in the binned profiles can serve as the second condition needed to determine the cell thermal mass correction coefficients to minimize bias in binned Argo data. The optimized coefficient pairs are listed in Table 1. Even if not optimized with the second condition, the example cell thermal mass correction coefficients used in Fig. 5 produce profiles with less bias than Johnson et al. (2007), Martini et al. (2019), and Johnson (2020).

Following the same methods used in Martini et al. (2019), the 16 Hz corrections are adapted for sampling at 1 Hz. The results are presented in Table 2.

5. Efficacy of the corrections on in situ data

The efficacy of applying the different correction coefficients determined in Johnson et al. (2007), Martini et al. (2019), Johnson (2020), and this paper are shown in Fig. 6. The same profile is used as in Fig. 1, and it is expected that the practical salinity profile will be a step change like the temperature profile. The profiles corrected using the Martini et al. (2019, and this paper) coefficients most closely approximate this idealized model, while the Johnson et al. (2007) and Johnson (2020) corrected profiles amplify the practical salinity spike within the interface. The spiking is caused by insufficient corrections for alignment and large values of α.

The stratified tank analysis is vital to understanding dynamic errors in the SBE 41CP. The analysis presented in Martini et al. (2019) revealed the contributions of alignment and cell thermal mass to salinity spiking, which could then be verified with data from Argo floats (Figs. 1 and 6). The corrections from Martini et al. (2019, and this paper) appear to be closer to correct, but it is only a single profile and what is truly correct is only an assumption. We therefore cannot recommend that any of the corrections in Johnson et al. (2007), Martini et al. (2019), Johnson (2020), and this paper be applied to binned or unbinned Argo data. A more vigorous statistical approach using in situ data is needed. This can be done with the full-resolution, unbinned, 1-Hz CTD data from SBE 41CP deployed on SOLO II Argo floats. By using in situ Argo float data, we remove ambiguity associated with the following:

These optimized corrections are the topic of a forthcoming paper and will provide robust recommendations for handling data from the entire fleet of SBE 41CPs deployed on Argo floats.