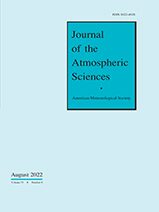 Distributions of total water from a stack of six horizontal runs through a well-mixed boundary layer with a layer of 8/8 stratocumulus during ASTEX (flight A209), together with the total water, liquid water, and temperature profile.

Distributions of total water from a stack of seven horizontal runs through a decoupled boundary layer with stratocumulus and penetrative cumulus during ASTEX (flight A213), together with the total water, liquid water, and temperature profile.

Cloud fraction plotted against the run-mean total water content normalized with the run-mean saturation specific humidity (l,i). The approximate error in /(l,i) is shown for each dataset in the inset. See text for more complete description of the errors. Datasets: FIRE (plus signs), ASTEX (triangles), and EUCREX (filled circles).

Cloud fraction plotted against the run-mean condensed water content normalized by (l,i). The approximate error in /(l,i) is of the order of 15% for the ASTEX and FIRE cases and 20% for the EUCREX cases. Datasets: FIRE (plus signs), ASTEX (triangles), and EUCREX (filled circles).

Form of the diagnostic cloud fraction prediction scheme from Slingo (1980). Cloud fraction is plotted against relative humidity for high–low-level cloud (solid line) and midlevel cloud (dashed line). The definitions of the cloud types are given in the text.

Fig. A1. Specific total water for 4 s obtained from the Meteorological Research Flight total water probe during a run in ice cloud (solid line). The minimum envelope fit to the data is shown as a dashed line.