The Second ARM Training and Science Application Event: Training the Next Generation of Atmospheric Scientists

What: Twenty-four graduate students and early career scientists from all over the world gathered to learn about ARM data and the latest observation science.

The Atmospheric Radiation Measurement (ARM) user facility (Turner and Ellingson 2016) collects valuable observations of atmospheric variables affecting the Earth’s radiation budget. These include properties of aerosol, cloud, precipitation, dynamic, and thermodynamic fields. The ARM user facility also supports routine high-resolution modeling efforts at its Southern Great Plains (SGP) site, and over the years it has had significant impacts on cloud-resolving and Earth system model development (Krueger et al. 2016; Randall et al. 2016). In an effort to promote use of the ARM data by the next generation of atmospheric scientists, the second ARM Summer Training and Science Applications Event on observations and modeling of clouds and precipitation took place from 14 to 21 July 2018. The event was sponsored by the ARM User Facility and was catered toward graduate students and early career scientists interested in observations and modeling of aerosol, cloud, and precipitation processes. Theoretical and practical instructions on the application of ground- and aircraft-based observations from a wide array of active and passive sensors, and finescale-resolution model simulations were provided during the training. This informed the participants about innovative methods for using the ARM data and numerical models to address complex scientific questions. The event was locally organized by the Cooperative Institute for Mesoscale Meteorological Studies (CIMMS) and was held at the National Weather Center in Norman, Oklahoma. The training was attended by 12 instructors and 24 participants.

The training event was a follow-on to the first training event held in 2015, and was similar in spirit to the summer and winter schools organized under the umbrella of the European Marie Curie Initial Training Network for Atmospheric Remote Sensing (ITARS; Banks et al. 2016), and the Arctic Amplification: Climate Relevant Atmospheric and Surface Processes, and Feedback Mechanisms [(AC)3; Wendisch et al. 2017] projects. In mid-February of 2018, the call for applications was announced encouraging graduate students and early career scientists to submit an application by the end of March 2018. The call for applications explicitly mentioned six working groups and the instructors associated with each of them, with an intent that the applicant would express interest in being a member of one of the groups. The application package was expected to have a one-page motivation letter, one recommendation letter, and a résumé. Fifty-two graduate students and 9 postdoctoral scholars from around the world responded to the call for applications, with 7 postdoctoral scholars and 17 graduate students (total of 24) out of the 61 applicants chosen to attend the event. Based on the participant’s scientific interest expressed in the motivation letter, each was assigned to one of the six groups (Table 1).

Group name, project title, and project scope during the training event. Each group consisted of two instructors and four participants. 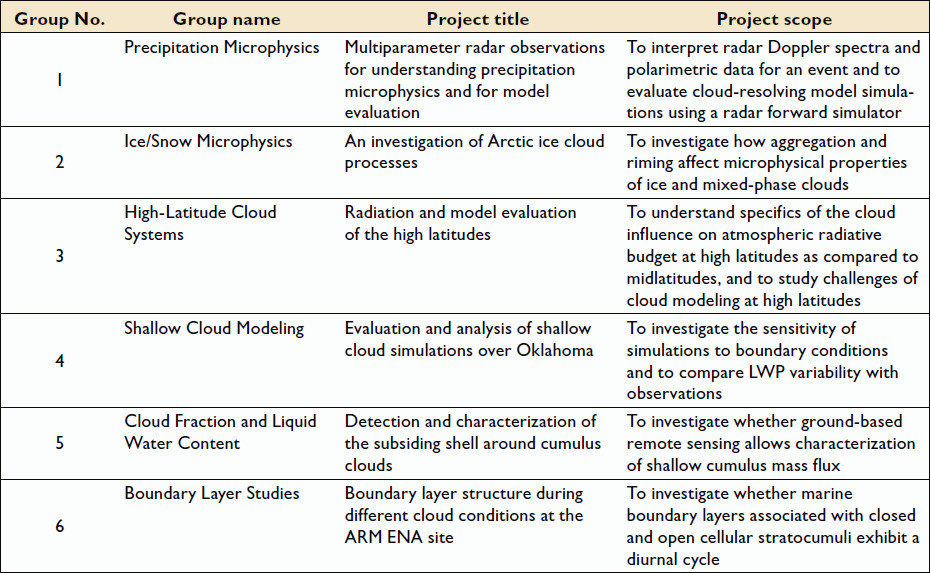 The training event was designed to be hands on. Daily activities—except on the first, fourth, and last days—included two keynote lectures from the instructors in the morning, followed by 5 h of group research activity. Presentations were made on the first day to introduce the participants to the ARM user facility, available data, data quality, and data processing software (e.g., Helmus and Collis 2016). This was followed by short introductions by the instructors to the group projects and an icebreaker gathering. The keynote lectures from the instructors included about an hour of presentation on the instructor’s topic of research and were followed by an exercise or short quiz intended to initiate discussion. On the fourth day of the event, the instructors and the participants visited the ARM SGP site to see the instruments and to gain knowledge about practical and logistical challenges in operating a scientific observing facility. The event concluded midday on the last day with each group making a 20-min presentation showcasing results from its group work. After the group presentations, the instructors met to decide on the winning group based on presentation style, depth of scientific understanding, cohesiveness of the group work, and other factors. Group 5 was declared the winner and was awarded with a small prize funded by the instructors.

The group research activity was specifically designed to strongly leverage data collected at the ARM sites in conjunction with output from numerical models and satellite-borne instruments. Each group had two instructors and four participants. Described in brief below are the six group projects and their outcomes as reported during the presentations.

The event brought together scientists (instructors) from the United States and Europe with expertise in instrumentation, retrieval techniques, and modeling with a range of scientific focus. This not only enabled the participants to interact with experts with different scientific cultures and focuses but also fostered collaborations between U.S. and European counterparts (Haeffelin et al. 2016). With 19 (out of 61) applicants, 4 (out of 24) selected participants, and 4 (out of 12) instructors from institutions outside of the United States, the event highlighted interest in the ARM data and the training event from the international scientific community.

Over the last three years (2015–17) 87 undergraduate and 120 graduate students have visited the ARM sites in some capacity. During the same period, 39 students have presented posters as a first author at the joint ARM and Atmospheric System Research Principle Investigators meeting. This suggests that the ARM user facility is being used in training the next generation of scientists at both graduate and undergraduate levels. However, currently very few U.S. universities have observing facilities with instruments for observing aerosol and cloud properties, with none of them having instrumentation as comprehensive as at the ARM sites. Hence, with continuous operation of more than 100 instruments, the ARM sites make an ideal location for students and early career scientists to gain hands-on experience in atmospheric instrumentation and to understand its scientific value through such a training event.