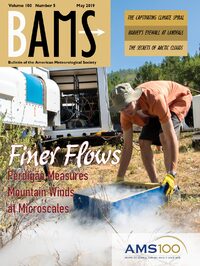 The final frame of the animated climate spiral, updated to the end of 2018. The animated version is available as Fig. ES1. Regularly updated versions are available from www.climate-lab-book.ac.uk/spirals/. 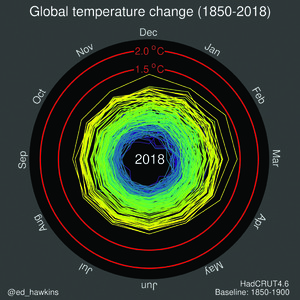 The Climate Spiral Demonstrates the Power of Sharing Creative Ideas

Graphical visualizations have the potential to engage diverse audiences in understanding the changes to our climate, especially when spread worldwide using both traditional and social media. The animated global temperature spiral was one of the first climate graphics to “go viral,” being viewed by millions of people online and by more than a billion people when it was used in the opening ceremony of the 2016 Rio Olympics. The idea, design, and communication aspects that led to the successes of this animated graphic are discussed, highlighting the benefits to scientists of engaging actively online and openly sharing their creative ideas.

Graphical visualizations have the potential to engage diverse audiences in understanding the changes to our climate, especially when spread worldwide using both traditional and social media. The animated global temperature spiral was one of the first climate graphics to “go viral,” being viewed by millions of people online and by more than a billion people when it was used in the opening ceremony of the 2016 Rio Olympics. The idea, design, and communication aspects that led to the successes of this animated graphic are discussed, highlighting the benefits to scientists of engaging actively online and openly sharing their creative ideas.

Effectively communicating climate change is an enormous challenge, especially as there is a need to reach broad audiences across the planet. On 10 May 2016, an animated spiral graphic showing the familiar rise of global temperatures in an unfamiliar way (Fig. 1; Fig. ES1 in the online supplement: https://doi.org/10.1175/BAMS-D-18-0228.2) was published on Twitter and subsequently “went viral.” The original tweet (Hawkins 2016a) has been viewed more than 3.7 million times, but the reach is substantially larger when considering other media channels. For example, the animation was viewed several million times on various Facebook pages and through many online stories (e.g., Mooney 2016; Plumer 2016). Prominent people known to have used or shared the graphic include Elon Musk, Bernie Sanders, the artist Banksy, and senior policymakers in the United Kingdom and Australia. It was even shortlisted for a design award (Kantar Information is Beautiful Awards 2016) and translated into several different languages by the U.S. Department of State (Buchanan 2016) for their online web pages.

The most high-profile appearance of the visualization was during the opening ceremony of the 2016 Rio Olympics, which included a section about climate change—probably the most watched broadcast about the climate ever. The animated climate spiral was used to emphasize how global temperatures have already increased, being viewed by more than a billion people, many of whom may not have been previously exposed to climate science so directly (Koekoek 2016). We discuss possible reasons why the climate spiral became so popular and describe how it was designed and created, with the aim of enhancing graphical visualization and engagement throughout climate science. The story highlights the power of creativity, social media, open data, sharing of ideas, and collaboration between scientists who never met in person until more than two years later.

THE DATA AND THE IDEA.

The original idea for creating a spiral graphic came when author JF showed author TF some earlier graphics produced by author EH which had used stacked horizontal lines to represent global temperatures from January to December in each year since 1850 (Hawkins 2016b). TF suggested that connecting December to the following January to create a spiral would show the evolution of temperatures in a more dynamic way. JF thought this was a great idea and sent an email to EH, who he had never met, including the phrase “this is just a (crazy) thought.” EH found this hard to ignore and so further developed the idea and produced the graphic; subsequent email discussions between all the authors refined the design before it was published online.

The underlying data are the Hadley Centre/Climatic Research Unit, version 4 (HadCRUT4) temperature dataset (Morice et al. 2012) which, at the time, included monthly values for global mean surface temperatures from January 1850 until March 2016. Since average global temperature in 1850–1900 was adopted as an approximation of preindustrial conditions by the Intergovernmental Panel on Climate Change (Stocker et al. 2013), we chose to measure change relative to this level. The spiral therefore displays global temperature differences relevant to the aim of the Paris Agreement (United Nations 2016) of “holding the increase in the global average temperature to well below 2°C above pre-industrial levels and pursuing efforts to limit the temperature increase to 1.5°C.” The different seasonal characteristics of temperature change are also visible, with the largest anomalies appearing in boreal winter, coinciding with the seasonal phase of the El Niño–Southern Oscillation (ENSO). Figure 1 has been updated from the original version to include data until the end of 2018.

Possible scientific criticisms of the design include that uncertainty in the temperature data is not visualized and that, despite clearly labeling the temperature limits, a viewer may interpret the area of each circle as representing the change rather than the radius. In this case, the change may appear to be faster than it is. However, the area arguably grows more in line with the damage of global temperature change, which can be expected to be superlinear (Arent et al. 2014).

WHY WAS THE GRAPHIC SO POPULAR?

Effective communication of how and why our climate is changing is challenging. The primary culprit—carbon dioxide—is invisible and the worst effects can appear remote in both space and time. As climate researchers we have access to bewildering amounts of data, but how do we best distill this complex information to make the risks of climate change easily understandable to the general public? Moser (2010) highlights the important role of the messenger, imagery, emotion, consistent messaging, and keeping the audience’s attention.

With hindsight, many of the design and communication aspects of the spiral resonate with the factors emphasized by Moser (2010). First, the choice to use temperature—a variable that the public is very familiar with—makes it feel instantly relevant and understandable. In addition, the graphic was produced by scientists, who tend to be trusted messengers. Importantly, the visualization does not look like a traditional “boring” scientific graph or require any complex interpretation; it is intuitive and eye-catching. Our impression is that the similarity with a clock, usually regular and predictable, that gradually changes to be irregular, is effective imagery for communicating the temperature changes. The animated nature of the graphic is fundamental: it tells a story to the viewer about how temperatures are changing. The animation is not too long, ensuring attention is maintained, and as the temperatures rise substantially it influences emotions by providing a visual surprise at the end. Many viewers reported watching the animation over and over again for these reasons.

The year counter was placed in the center of the graphic to ensure visibility, and the colors were chosen to aid interpretation and add to the message. The internationally adopted temperature limits are shown in red, which emotionally signifies “danger.” The spiral starts using dark blue and ends with yellow to emphasize that we have not yet reached those “dangerous” levels. Although it may be tempting to use the analogy that temperatures are “spiraling out of control,” as some media stories did, an alternative (and more positive) message is rather that decision-makers and society can still take control and choose to avoid danger.

But, even well-designed and effective visualizations may not be widely seen or shared. Social media provides a new way of enabling “many to many” communication and has been found to be an effective tool for raising the profile of climate science (e.g., Pavlov et al. 2018). In particular, Twitter is now actively used by several thousand climate scientists to discuss, engage, collaborate, and communicate, thus raising their profile among peers and the public. Importantly, such online platforms allow a story to be consumed within the social media bubble rather than requiring a journey to another website (Hope 2016) and provides a relatively easy way of presenting information which can be subsequently amplified by journalists, the media, and highly popular accounts. These factors facilitated the spiral’s spread to over a billion people. In addition, the timing of the publication was favorable, though perhaps fortuitous. It came a few months after the 1.5°C target had been adopted as part of the Paris Agreement, and during a large El Niño event which pushed global temperatures slightly higher in 2016.

We believe that the reason why the spiral went viral is the combination of a creative idea, collaboration, design, timing, and, importantly, openness and possibility for sharing on social media, both within and beyond the research community. This has facilitated a diffusion of the spiral in various forms (Hawkins 2016c), and its message to be communicated at various fora and to diverse stakeholders. The spiral has stimulated collaborations and its success has helped inspire other climate scientists to produce a range of visualizations of climatic changes which have also been widely shared (e.g., Schmidt 2017; Lipponen 2017; Labe 2018; Hawkins 2018; Lipponen 2018). These are all examples of how unrestricted sharing of data and creative ideas are beneficial. We are delighted that our small contribution has led to a spiraling of creativity, and we encourage others to experiment and continue sharing ideas.