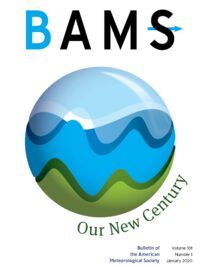 Beijing and the mountains to the north, as viewed from the Beijing Normal University campus.

The attendees at the ninth GeoMIP Workshop. The authors are in the middle of the front row. 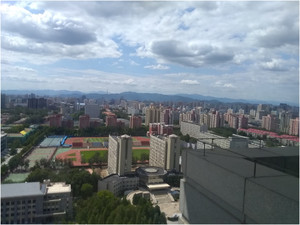 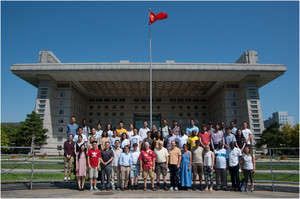 What: This ninth workshop was held to review new GeoMIP6 and related climate model simulations, plan joint analysis of the results, and discuss new GeoMIP experiments.

In late summer 2019, the ninth annual workshop of the Geoengineering Model Intercomparison Project (GeoMIP; http://climate.envsci.rutgers.edu/GeoMIP) convened at Beijing Normal University (Fig. 1). This meeting was held in conjunction with a summer school in which 89 participants from five continents learned about climate modeling of solar geoengineering, also known as climate engineering or climate intervention. Solar geoengineering refers to “radiation management” methods, which involve deliberate manipulations of the radiation budget through potential technologies such as stratospheric sulfate aerosols, marine cloud brightening, and cirrus thinning, but not CO2 removal. The students at the summer school were mainly physical science majors, with many from China, but also included some social science people. The summer school was focused on impact modeling (e.g., on agriculture and the cryosphere) and consideration of extremes, rather than just looking at climate model output. There were also lectures on governance and economics. This event signifies the first major international geoengineering meeting held in Asia.

Attendees of the summer school participated in lectures and discussions about solar geoengineering modeling, including a workshop on how to download and analyze GeoMIP output. Twenty-four of the attendees were from projects under the Developing Country Impacts Modeling Analysis for SRM (DECIMALS; www.srmgi.org/decimals-fund/) fund, a project aimed at building solar geoengineering research capacity in developing countries so that there is a diversity of well-informed voices at future climate negotiations.

At the GeoMIP meeting (Fig. 2), numerous new results were highlighted, including the potential role of stratospheric heating in side effects of solar geoengineering, simulations of direct condensation of H2SO4 into sulfate aerosols, and preliminary results from DECIMALS groups regarding downscaling solar geoengineering model output over different regions. Preliminary results from the direct condensation experiments show that, as compared to SO2, less injection is needed to reach the same aerosol optical depth, but ozone impacts differ between the participating models, necessitating further study. Several presentations also discussed topics that have thus far received limited attention in solar geoengineering research, including health impacts and glacier melt’s contribution to sea level rise. Participants also discussed plans and progress on the contributions to CMIP6, participation in an overshoot scenario in which solar geoengineering is applied upon exceeding a predetermined “dangerous” level, and plans for projects to isolate the role of stratospheric heating in multiple models; new results indicate that stratospheric heating appears to be important for surface climate, but we do not know whether those results are model dependent. Participants planned out future papers to write with CMIP6 output as it becomes available. We evaluated barriers to developing country participation in geoengineering research efforts and how GeoMIP and other major geoengineering projects can help remove some of those obstacles.

At previous meetings, GeoMIP highlighted priorities of regional analyses, particularly of impacts. At this ninth meeting, we saw evidence that those aspects are beginning to be addressed by both experienced researchers and newcomers to the field. Many of the attendees of the summer school expressed interest in maintaining involvement in GeoMIP and the solar geoengineering research community.

The next GeoMIP meeting will be held in summer 2020 in Sunday River, Maine, adjacent to the second Gordon Research Conference focused on the natural science study of solar geoengineering. Discussions held there will continue at the Climate Engineering Conference 2020, to be held in Berlin a few months later in October.