GOES-East image on 14 Sep 2020 of the five named storms in the Atlantic Ocean. (Image courtesy of NOAA.) 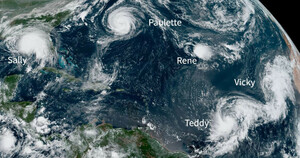 What: NOAA met with data users, partners, and stakeholders to communicate strategic NESDIS objectives and current activities and future plans for the Geostationary Extended Observations, low-Earth-orbit, and space weather programs, and garner feedback to help inform these important decisions.

COVID-19 has changed our daily life and reshaped the venue and format of international science conferences. The first Community Meeting on NOAA Satellites was held virtually via WebEx between 29 September and 2 October 2020. More than a thousand people registered for the meeting from more than 250 organizations across 33 countries. The meeting focused on operational space-based environmental observing system planning developments out to the 2030–50 time frame. It emphasized the needs for user-driven data-source-agnostic environmental products, as well as disaggregated satellite observing systems and enterprise ground segment solutions that can deliver those products. Presentations covered many nonlegacy NOAA- and partner-hosted satellite payloads and orbital constellation configurations. These included instrument hosting on small satellite and commercial platforms, and commercial data purchase agreements. It also included nonlegacy satellite orbits such as the Tundra high-Earth orbit.

In the current constellation, legacy Polar-orbiting Operational Environmental Satellite (POES) missions cover the early morning orbit, the EUMETSAT MetOp program covers the midmorning orbit, and the Joint Polar Satellite System (JPSS) covers the afternoon orbit. With legacy POES operating beyond its design life, there is a risk of not having soundings in this orbit. This risk has led to an urgency to replace this orbital plane with at least an Advanced Microwave Sounding Unit (AMSU) class sounder. The Defense Meteorology Satellite Program (DMSP) also has satellites in the early morning orbit, but these satellites manifest a microwave imager and not a sounder. Meanwhile, several options were recommended by the satellite agency administrators for the future microwave constellation.

Future generations will include improved legacy MWS solutions, such as the EUMETSAT Polar System Second Generation (EPS-SG) Microwave Sounder, and the CMA Fengyun 3 (FY-3) follow-on Microwave Temperature and Humidity Sounders. SmallSat or CubeSat MWS instruments that would utilize the 118 GHz O2 and 183 GHz H2O absorption bands, respectively, for temperature and moisture sounding are new constellation members being considered. These instruments would be much cheaper and faster to build than legacy instruments, and several of them could be dispersed from a single launch vehicle into diverse LEO configurations. In addition, NESDIS Center for Satellite Applications and Research scientists preliminarily demonstrated using the JPL Temporal Experiment for Storms and Tropical Systems–Demonstration (TEMPEST-D) CubeSat microwave data that intercalibration and performance monitoring could be achieved with these instruments relative to other orbiting MWS instruments. The TEMPEST-D has five channels with similar frequencies as microwave humidity sounders on board operational EUMETSAT MetOp-A/-B/-C and NOAA-18/-19 satellites. Those channels are particularly important for acquiring atmospheric water vapor and clouds. Meanwhile, the NOAA-20 Advanced Technology Microwave Sounder (ATMS) integrates atmospheric temperature and moisture profiling capabilities, which is not available yet on an individual CubeSat.

Technical challenges associated with small satellite instruments include antenna size limitations that prevent the legacy use of the microwave window channels at low frequencies for acquiring precipitation and surface parameters including snow and ice. The NOAA SounderSat mission set to launch in 2025, which is currently in the concept formulation stage, may feature a diverse MWS constellation that could potentially replace JPSS sounders.

At the conference, NESDIS Assistant Administrator Steven Volz presented a GOES-East Advanced Baseline Imager image that captured five named storms in the Atlantic Ocean (see Fig. 1), which is an occurrence that has not been seen in 49 years. Currently, there is not a similar capability of microwave remote sensing from geostationary orbit. As part of the NOAA Geostationary and Extended Orbits (GEO-XO) program, a study of the technical feasibility and a cost–benefit analysis of using a microwave sounder in geostationary orbit is being carried out. These instruments would allow relatively fast microwave sounding refresh needed for regional numerical weather prediction. The primary challenge of this effort is the extremely large antenna required to capture the diminutive microwave energy at geostationary orbit emanating from Earth at a spatial resolution similar to legacy polar-orbiting instruments. One suggestion given during the meeting was to assemble the antennas in space.

The outcome of the first Community Meeting on NOAA Satellites left a lot of questions to be answered in relation to microwave remote sensing. On the other hand, it made it clear that needs for expanded microwave sounding for NWP are being taken seriously by the whole satellite community. In addition, nonlegacy satellites and microwave sounder instruments with diverse orbits are being strongly considered as part of future microwave instrument constellations, while microwave imaging capabilities are considered fulfilled by current and already planned missions.