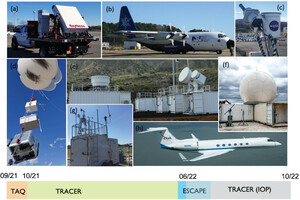 A Succession of Cloud, Precipitation, Aerosol, and Air Quality Field Experiments in the Coastal Urban Environment

The interactions and feedbacks among clouds, aerosols, pollutants, and the thermodynamic and kinematic environment remains an area of active research with important implications for our understanding of climate, weather, and air quality. These linkages are further complicated in coastal and urban environments where local circulations and anthropogenic influences impact each of these components and their interactions. Within this context, fundamental questions regarding the life cycle of convective clouds, aerosols, and pollutants have brought together a diverse, integrated, and interagency collaboration of scientists to collect and analyze measurements, in the Houston, Texas, area, from the summer of 2021 through the summer of 2022, with subsequent modeling studies to address these important research objectives. The U.S. Department of Energy’s Atmospheric Radiation Measurement (ARM) Facility and Atmospheric System Research (ASR) Program, the National Science Foundation’s (NSF’s) Physical and Dynamic Meteorology Program, the National Aeronautics and Space Administration’s (NASA’s) Tropospheric Composition Research and Health and Air Quality Applied Sciences Programs and the Texas Commission on Environmental Quality (TCEQ) are collaborating on a joint set of field campaigns to study the interactions of cloud, aerosol, and pollutants within the coastal, urban environment. In the Houston area, onshore flow from the Gulf of Mexico and the associated sea-breeze circulation generates numerous isolated convective cells, particularly in the summer months, that interact with a variety of urban and industrial emissions.

Fundamental questions regarding the life cycle of convective clouds, aerosols, and pollutants have brought together a diverse, integrated, and interagency collaboration of scientists to collect and analyze measurements.

The Tracking Aerosol Convection interactions Experiment (TRACER) Air Quality (TAQ) campaign, led by NASA with contributions from TCEQ, probed Houston air quality through the integration of observations from multiple perspectives with platform deployments staggered throughout July–August 2021 and an intensive operational period during September 2021. These perspectives included ground-based measurements of in situ and remotely sensed air quality measurements (Fig. 1c) from a suite of supersites, mobile laboratories, and shipborne platforms linked with overflights from the NASA Johnson Space Center Gulfstream V (Fig. 1h) mapping out the spatial distribution of aerosols, ozone, and ozone precursors over the greater Houston region multiple times per day. The measurements collected during TAQ will be used to evaluate the current conceptual model for air quality in the region by linking measurements to air quality models and satellite observations, including the creation of proxy data for the NASA Tropospheric Emissions: Monitoring Pollution (TEMPO) mission, as well as to assess the intersection of air quality and socioeconomic factors.

The DOE TRACER campaign brings the ARM Mobile Facility (Fig. 1e), a comprehensive suite of remote sensing and in situ instrumentation, along with a C-Band Scanning ARM Precipitation Radar (CSAPR; Fig. 1f) for a period of 1 year that began in October 2021. During the summer months, June–September 2022, an intensive operational period will bring additional measurement platforms to further characterize the local aerosol, cloud, and environmental properties along with their regional variability. A number of these additional measurements are contributed through ASR-funded projects and include characterization of the regional and time-varying aerosol and cloud condensation nuclei (Fig. 1g) and measurements of the local thermodynamic structure from balloons, remote sensors, and remote-piloted aircraft. A unique component of the TRACER campaign will be the use of automated software to track convective cells with the CSAPR sampling the polarimetric signatures of cloud and precipitation microphysics at high-resolution through the convective life cycle. The scientific focus of the TRACER campaign is the study of atmospheric processes that drive cloud and aerosol processes with a particular focus on the role that aerosols play in impacting convective properties including updraft strength, microphysical properties, total precipitation, and anvil cloud coverage. These aerosol impacts on convective cloud systems remain a topic of significant debate in the scientific literature.

The NSF Experiment of Sea Breeze Convection, Aerosols, Precipitation and Environment (ESCAPE) campaign will take place from 25 May through 1 July 2022, and includes two aircraft, and surface-based fixed and mobile measurements. The scientific focus of ESCAPE involves characterization of the life cycle of convective cloud systems, particularly the dynamics of updrafts and downdrafts, and how it is impacted by the coastal and urban environment and aerosol composition and concentration. The planned aircraft platforms include the NCAR C-130 (Fig. 1b) and the Stratton Park Engineering Company (SPEC) Learjet, both of which will deploy payloads that include in situ sampling of cloud and aerosol microphysics, and remote sensing of cloud properties. On the ground, multiple fixed and mobile radar systems (Fig. 1a) will be used to track convective cells and perform multi-Doppler analysis for the derivation of velocities within the convective systems over the course of their life cycle. Two additional mobile sensing trucks with additional remote sensing and in situ instrumentation, will focus on characterizing the two-way interactions between convection and the environment, particularly the characteristics of downdraft driven cold pools and subsequent convective redevelopment. Links between cloud microphysics, vertical motion, and lightning will also be examined.

A particular advantage of the Houston region for the deployment of a major atmospheric field campaign is the existence of several operational networks that provide important contextual measurements across the region. The TCEQ air monitoring network includes 75 sites within the Houston area that collect air quality, meteorological, and solar radiation measurements. The HoustonNet Global Positioning System Network provides precipitable water vapor retrievals at more than 130 sites around the Houston area and the Houston Lightning Mapping Array (with additional support from NSF ESCAPE) measures four-dimensional lightning discharge including charge distribution, flash location, and flash rate.

A multiagency set of field campaigns as large as the TRACER/ESCAPE/TAQ effort requires a great deal of planning, coordination, and cooperation. These components have been impacted and complicated by the ongoing COVID-19 global pandemic. During the planning stages, the health and safety of participating scientists, technicians, and other campaign participants has always been placed at the forefront of program management concerns and decisions, while at the same time assuring that the planned measurements and science could be accomplished. Necessarily, this caused changes in the timelines for site selection and preparation, instrument shipping and testing, and in eventuality the operational dates of the campaign. New health and safety protocols have been developed, accounting for the varying working conditions and operational needs, compared to previous campaigns. While some compromises have been necessary, the expectations are for continued support among the interagency partners toward accomplishment of all scientific goals in a manner that is safe for all participants.

Each agency has its own data sharing and availability guidelines. Data collected during TRACER by the ARM instrument platforms will be available to researchers and the public through the ARM Data Center via Data Discovery in near–real time, while data collected by the ASR contributors and ARM guest instrumentation will be available at the same location within 6 months of the end of the campaign. Data collected during TRACER-AQ will be available upon finalization after the field campaign at the campaign web page as well as ingested into a NASA-supported Distributed Active Archive Center in the future. Data collected during ESCAPE will be publicly available after an initial period of quality control through the ESCAPE field catalog, which will be maintained at the NCAR Earth Observing Laboratory. The data collected during these field campaigns will be used by the science teams though we invite the larger atmospheric science community to tackle critical knowledge gaps in our understanding of the interactions among convective clouds, aerosols, and air quality and how they are influenced by the environment.