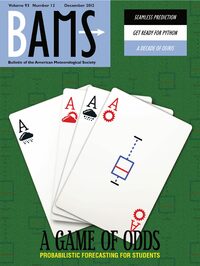 GEOpod presentation of an isosurface of wind speed. The user can deploy the virtual dropsonde, call a distance calculator, change the variables displayed on the dashboard, turn the autopilot on and off, or actuate a particle imager.

A GEOpod display of u-wind at 16 m s−1 colored with potential vorticity (PV) and a perspective taken from outside the model domain to show the gridding utility. A user can point and click any point and the GEOpod will “fly” to that location within the domain. The values of PV units (1 unit = 10−6 m2 s−1 K kg−1) range from −1 (dark blue) to 10 (red). Orange is in the 8.2 to 8.9 range. 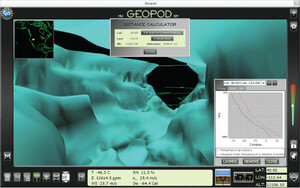 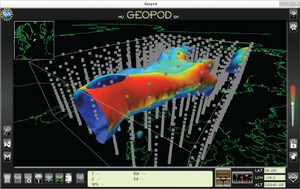 Interactive Immersion Learning: Flying through Weather Data onboard the GEOpod