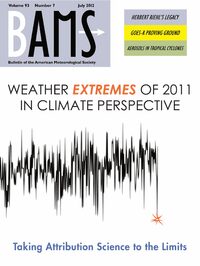 The 2011 Tornadoes and the Future of Tornado Research

The 27 April 2011 tornado outbreak across the southern United States set a record for the most tornadoes in a 24-h period and was the second deadliest in U.S. history. Less than a month later, the Joplin, Missouri, tornado added another record: the most fatalities from a single storm since official records began being kept. Numerous commentators have asked how such a death toll could occur today, given all of the available communications technologies and extensive knowledge of atmospheric conditions leading to the formation of tornadoes. Both the Joplin tornado and the 27 April outbreak were well anticipated and warned; the Storm Prediction Center's convective outlook for 27 April included an area of high risk centered over northern Alabama, where the deadliest tornadoes occurred, and all of the deaths occurred within tornado watches. Similarly, the Joplin tornado had watches covering the area and a tornado warning of more than 20 minutes.

The societal impact of tornadoes or any natural disaster depends on both the natural phenomenon and human action. The information needed to evaluate the death toll in these outbreaks is not yet completely available, so all observations about the outbreaks remain provisional. Preventing a repeat of this event in the future may require insights from meteorologists, social scientists, and others, and will likely take time for any definitive policies to mature. Nonetheless, these tragic outbreaks spur discussion of some innovative directions for future tornado research that our work (Simmons and Sutter 2011) suggests could reduce fatalities in future tornado outbreaks.

The tornadoes of 2011 highlight a unique—and perhaps the toughest—problem in protecting the public from severe weather: the long-track, violent [enhanced Fujita (EF)-4 or EF-5] tornado. Permanent homes offer adequate protection for weak and even strong (EF-2 or EF-3) tornadoes, provided residents receive a warning and take shelter in an interior closet or bathroom prior to impact. Improvements in the probability of detection and warning lead times and the reduction in area warned with storm-based warnings, along with new technologies for delivering the warnings, continue to reduce permanent home fatalities in both weak and strong tornadoes. However, insuring residents receive a warning and take shelter in an interior bathroom or closet will not prevent fatalities because these rooms often fail to protect residents from an EF-4 or EF-5 tornado. In addition, the longer a tornado remains on the ground, more structures and people are placed at risk.

To address this threat, engineers have developed safe rooms and underground shelters capable of protecting residents from even the strongest tornadoes. When a significant event occurs, there is enhanced interest and some political pressure to increase the use of shelters. However, violent tornadoes are just too rare to make hardening millions of homes in tornado-prone states cost effective.

To illustrate, Alabama suffered 232 fatalities in the 27 April outbreak and 608 from tornadoes since 1950, or 9.8 deaths per year. According to the U.S. Census Bureau, Alabama has an estimated 1.45 million single-family homes. Equipping every one of these homes with a tornado shelter could cost at least $3.6 billion and would prevent at most only fatalities that occur in permanent homes. Since 1995, 32% of U.S. tornado fatalities have occurred in permanent homes, so tornado shelters might prevent about 3.1 fatalities per year. Assuming a 50-yr expected life of a shelter and a 3% real interest rate, the cost per life saved for permanent home shelters is $44 million. (For more on the value of tornado shelters, see chapter 5 of Simmons and Sutter 2011.) This substantially exceeds the value of a statistical life typically revealed in risky tradeoffs (see Viscusi and Aldy 2003). Consequently, we should not expect to see widespread installation of shelters or safe rooms, even in tornado-prone states.

Getting people out of the path of violent tornadoes may offer a more promising approach to saving lives from future outbreaks. Many reasonable objections could be raised against “evacuations” for tornadoes, and the objections illustrate the research required to make evacuations a safety-improving measure. For instance, permanent homes provide substantial protection for residents against most tornadic winds. People who evacuate would face substantially greater risk if caught in a vehicle or outside in a tornado than in their homes. In addition, leaving their home increases the risk from accompanying thunderstorm threats (winds, lightning, and flooding rains). Thus, we would need to know the strength of a tornado in real time, because permanent home residents will only want to get out of the path of a violent tornado. We would also want to know if a violent tornado is likely to maintain its strength, and be able to precisely forecast the path of the tornado. Emerging technologies like mobile Doppler radars, short-wavelength radars, and phased-array radars may allow the observation of the lower levels of thunderstorms to identify the winds in a tornado. The path forecast would need to be more precise than reflected in current storm-based warnings, to insure that residents are not directed into the tornado path and prevent too many people from attempting to flee the storm. Large urban areas are vulnerable to traffic problems, and shadow evacuations would result in greater vulnerability than if people remained in permanent homes. Longer lead times for warnings may help residents prepare to evacuate (e.g., arrange to go to a friend's or relative's house a safe distance from the tornado) and may be feasible in the future with warn-on-forecast for tornadoes (see the 2009 BAMS article by Stensrud et al.). Of course, an accurate forecast of the tornado path an hour in advance will still be critical.

The requirements for evacuations to reduce risk may seem daunting, but a 2007 BAMS paper by Wurman et al. highlighted the deadly potential of a long-track, violent, urban tornado. The cost per life saved indicates that shelters will not be widely deployed, so evacuations offer the only hope for reducing the death toll in a long-track EF-5 tornado. In a 2002 Weather and Forecasting article, Hammer and Schmidlin found that many residents of Moore, Oklahoma, successfully fled their homes in cars in advance of the 3 May 1999 F5 tornado, limiting the death toll in this powerful tornado. Residents of mobile homes are currently encouraged to abandon their homes in a tornado, and so we are perhaps informally moving toward limited-scale tornado evacuations. Research by meteorologists could help provide the additional information needed to insure that evacuations by permanent-home residents reduce risk.

One concern regarding evacuations of any type is for officials to be cognizant of the needs of those in the community who may find evacuation difficult or impossible. Lower-income residents may not have access to a car. People with diminished mobility would be left behind. State officials have taken great care to create inventories of high-need populations for other hazards. If “limited evacuations” are to be a policy consideration, then care must be given to consider those who may have trouble following the recommended action in advance of a large tornado.

A second possible response is a longer-term endeavor contingent on knowledge that currently does not exist and is only now beginning to be discussed, while being met with considerable skepticism. Tuscaloosa, Alabama, has been hit by multiple tornadoes over the past 15 years (prior to 2011, there have been 33 tornadoes in Tuscaloosa County since 1995 resulting in 44 deaths; SPC tornado archive: www.spc.noaa.gov/wcm) and suffered tornado damage less than two weeks before the 27 April tornado. Such incidents suggest to the public that there might be some local differences in the probability of tornado damage. Given the current state of knowledge, persistent tornado tracks or local differences in tornado probability cannot be proven to exist, and the perception that they exist may simply reflect our selective perception and the rarity of tornadoes. Yet, an inability to document the existence of persistent tornado tracks today does not prove that they do not exist. When the term “persistent tornado tracks” is used, it is often assumed to refer to areas that “always” or “never” get hit. However, societal impacts could be substantially reduced if areas of relatively low (but not necessarily zero) local risk can be identified. New critical facilities like hospitals, schools, and utilities could be located in the relatively safe areas, as could vulnerable facilities like mobile home parks or nursing homes. Relocation to low-probability areas would substantially reduce mobile-home fatalities and could be accomplished at relatively low cost due to the nature of mobile-home facilities. Identification of relatively high-risk locations may spur residents and facility operators to take mitigation measures like installing tornado shelters.

The ability to investigate whether local geography affects tornado tracks may soon be possible. If accurate historical tornado paths can be overlaid on precise topographical maps, researchers could search for patterns. New radars able to observe the lower portion of tornadic thunderstorms will then allow researchers to determine if patterns in the path records reflect changes in the storm structure. This would allow us to determine if persistent tracks are merely coincidental before we have decades of detailed observations.

Neither of the directions for research offered here will allow a reduction of the societal impacts of tornadoes tomorrow. The research needed to make local evacuation or relocation of critical facilities feasible will likely require years. Some other elements of tornado vulnerability, however, are unlikely to be effectively addressed with available information and technology. Hopefully, our observations here will help researchers focus their efforts on providing the information needed to reduce fatalities in future tornado outbreaks.