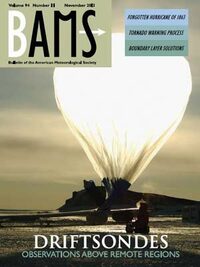 Framework of the synthetic GPM simulator.

Schematics of the GPM satellite simulator and the specifics of the GPM Core Observatory. Note that the swath widths vary slightly at different latitudes due to the Earth's oblateness. 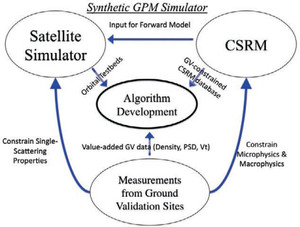 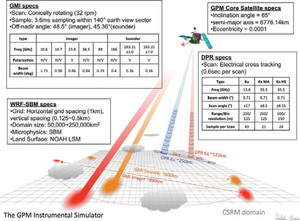 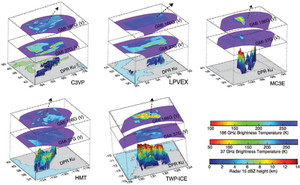 Prior to the Core Observatory launch, the “day-one” GPM operational precipitation algorithms and their associated products must be tested using proxy data to demonstrate their validity.1 Algorithm testing requires representative measurements of GPM-observable signals associated with geophysical parameters (e.g., precipitation rate). One approach is to use a combination of in situ microphysics profiles (point observation) and airborne remote-sensing data from field campaigns, but sampling deficiencies limit the broad applicability of this method. A different approach is to use a database constructed from a Cloud-System Resolving Model (CSRM),2 and to generate synthetic data for testing. Prior to the TRMM satellite launch (1997), the Goddard Cumulus Ensemble model with bulk single-moment microphysics was widely used for such algorithm testing purposes (e.g., Meneghini and Kozu 1990).

During the GPM era, we developed the synthetic GPM simulator that integrates in situ observations, a CSRM, and satellite simulators to synergistically support development of the GPM precipitation algorithms. First, CSRM-simulated precipitation systems are evaluated and constrained by the in situ observations from various field campaigns. Second, GPM-observable signals are simulated from the CSRM-simulated geophysical parameters through the unified satellite simulators (Fig. 1). In this way, a bottom-up approach is taken to “upscale” in situ point measurements to CSRM scales (1 km), then to the sensor footprint scales (5–30 km), and finally to the satellite swath scales (125–1,500 km).

Description of measurements and instruments deployed at the GPM GV sites. These data are used to evaluate the WRF-SBM.

The WRF-SBM is one of the most advanced CSRM designed to support the GPM satellite mission. The WRF-SBM was developed from the Advanced Research WRF version 3.1.1 and coupled with the SBM originally developed for the Hebrew University Cloud Model. In comparison with the previous CSRM simulations used in previous satellite simulator studies, the WRF-SBM has a number of new features and innovations. First, the WRF core allows for heterogeneous surfaces with a terrain-following coordinate system, rather than a flat terrain common to idealized CSRMs. This enables various terrain-induced storm simulations, such as orographic precipitation or lake-effect storms. Second, the WRF core features multiple nested domains to downscale synoptic-scale analyses (50–100 km) to resolve storm-scale dynamics (1-km horizontal grid spacing and 60 vertical layers). Therefore, mesoscale and synoptic-scale propagating precipitation systems, such as midlatitude convective systems, frontal systems, and high-latitude snow systems, can be simulated in addition to tropical precipitation.

Third, and most importantly, the WRF-SBM features explicit size-bin-resolving cloud microphysics rather than the bulk microphysics used in the previous TRMM algorithm CSRM support. Cloud hydrometeors are categorized into liquid droplets, ice crystals (plate, column, dendrite), snow aggregates, graupel, and hail in the SBM. The discrete particle size distributions (PSDs) of the hydrometeor classes are represented by 43 bins covering a large range of particle sizes, unlike the fixed-shape PSDs in bulk microphysics schemes. The melting and riming processes are also explicitly calculated for each snow aggregate size bin, allowing for a natural transition between hydrometeor species rather than the spontaneous conversion used in more common bulk microphysics formulations.

Because of its complexity, the WRF-SBM demands an order-of-magnitude greater computational resource than the WRF using a bulk microphysics scheme. We have conducted and stored several testbed cases with the WRF-SBM on the Pleiades supercomputer, operated by the NASA Advanced Supercomputing division in the NASA Ames Research Center. A 24-h WRF-SBM simulation generally requires ~5,000 processors and ~2 TB of storage for hourly output data. With such computational power, the WRF-SBM can provide more detailed microphysics (PSDs, effective density, melt fraction) information at higher resolution (1-km horizontal grid spacing) and over a larger area (~250,000 km2) than the idealized CSRM used in the TRMM prelaunch era. The accuracy of the simulations with the bin microphysics scheme will be improved by incorporating various constraints derived from detailed GV observations.

The procedure to establish a GV-constrained WRF-SBM system includes a number of steps. First, a time series of simulated three-dimensional radar reflectivity of weather radar is computed from the WRF-SBM, and the instantaneous macrostructure of precipitation systems is evaluated by comparing the spatial and temporal variability of the simulated reflectivity to observations from the operational weather radar. During this evaluation step, the lateral and surface boundary forcing (analysis) or initial conditions of the WRF-SBM simulation are modified for forecast improvement.

Second, the statistical properties of the simulated radar echoes—such as the echo-top height and the maximum intensity in the column—are evaluated. These statistical parameters can be used to help validate the WRF-SBM-simulated microphysics profiles. Additional properties of the PSDs such as hydrometeor effective densities and terminal velocities are further evaluated against the aircraft- and ground-based in situ measurements (Table 2). The individual measurement specifications of the in situ instruments are implemented to compute instrument-equivalent parameters from the WRF-SBM through the guidance from GV scientists. This software module, the GV simulator, is a newly developed component in the Synthetic GPM Simulator [see examples in Iguchi et al. (2012a)].

Based upon results from the detailed microphysics evaluation, we modify microphysics process parameters, such as the number of background aerosols, ice nuclei, ice collision and coalescence rate, and amount of supercooled water, to name some, in order to bring the model fields into alignment with the observations [see more details in Iguchi et al. (2012a; 2012b)].

The GPM satellite simulator translates the WRF-SBM-simulated geophysical parameters into the GPM-observable L1B [raw instrumental signals: microwave brightness temperature (Tb) for the GMI and equivalent radar reflectivity factor (Zm) for the DPR] signals in an orbital format (Fig. 2). The GPM satellite simulator has been built upon the existing multisensor satellite simulator, the Goddard Satellite Data Simulator Unit (G-SDSU), which is the spinoff version of the SDSU. The G-SDSU integrates several independent FORTRAN modules: the IO Module, the Optics Module, the Surface Module, the Radiative Transfer Modules, the Radar Module, and the recently developed Scan Module. This FORTRAN-based package of modules constitutes a comprehensive end-to-end GPM satellite simulator. Brief explanations of the most important modules are included here.

First, instantaneous fields of PSD bins, melting/riming fraction, atmospheric profile (temperature, pressure, humidity), and surface parameters (surface elevation, surface type, geolocation) are incorporated from the WRF-SBM simulation into the IO Module. Due to the enormous file size of the WRF-SBM, the G-SDSU decomposes the WRF-SBM domains into small subdomains for each CPU and its memory through Message Passing Interface processing.

For the GMI sensor, top-of-atmosphere microwave Tbs are computed via the two-stream model with Eddington's Second Approximation using bulk single-scattering properties along FOV-satellite slant paths in the Radiative Transfer Module. This slant-path approach mimics rigorous 3D microwave radiative transfer approach by using a 1D radiative transfer model. This module also considers the effect of terrain. Computed microwave Tbs are convolved over the antenna gain functions to represent measurements of brightness temperature over the footprint, called the Effective Field of View (EFOV). The EFOV describes the combined effects of the half-power beamwidth of the antenna gain and the radiometer sample integration period. GMI beam widths of the high- to low-frequency channels range from 0.4° (183 GHz) to 1.75° (10 GHz), corresponding to footprint sizes from 5 to 30 km, respectively.

The Radar Module calculates the attenuated and attenuation-corrected equivalent radar reflectivity factors (Zm and Zt, respectively) along the FOV-satellite path. Radar range (distance between radar returns and satellite positions) is estimated from the Scan Module. Zm and Zt are averaged over the individual pulse volumes using the Gaussian antenna gain pattern. In this process, terrain effects on radar sampling volume or area are used to account for the influence of surface-clutter effects in the cross-track scanning radar. At the radar range just above the surface, the total two-way path-integrated attenuation is estimated. Multiple scattering effects are not yet considered in the Radar Module. The vertical and horizontal sampling strategy in the Radar Module follows the GPM DPR algorithm.

The Simulated Orbital GPM Testbed consists of satellite orbital parameters, the GMI Tbs, and the DPR reflectivities. A total of 240 scenes of orbital data were generated from 10 GV cases for supporting GPM prelaunch algorithm development. Figure 3 displays simulated GMI Tb and DPR reflectivity from a selected scene of each site. The panel shows a diverse spectrum of simulated GPM satellite signals associated with different precipitation systems; however, the orbital database is limited over the WRF-SBM regional domain instead of an entire single orbit. The uniqueness of these simulated orbital data is the inclusion of the detailed retrieval-like geophysical parameters derived from the WRF-SBM, such as rainfall rate, column water vapor, surface skin temperature, and moments of precipitation PSDs. These geophysical parameters are also processed with the same antenna convolution method as is done in the GMI and DPR modules. Thus, the satellite sensor–observable signals and algorithm-retrievable geophysical parameters are sampled in identical footprints within the same dataset, allowing algorithm scientists to quickly assess their retrieval algorithm products.

For convenience, the NASA Precipitation Processing System team converts the simulator output into the format adopted for the official GPM satellite products. The initial version (V1) of the synthetic orbital dataset is available at the ftp sites.5 The official product can be readily visualized and checked by the new GPM-era free viewer THOR (the Tool for High-Resolution Observation Review).6 The original WRF-SBM database is also available through the NASA GSFC Cloud Library.7

The GPM simulator utilizes improved observations, CSRMs, and satellite simulators compared to those used in the earlier TRMM prelaunch era. The comprehensive combination of detailed storm scenes with in situ data constraints and realistic forward models perhaps has not been previously achieved in other simulated datasets. Further improvement of the WRF-SBM simulations and the GPM satellite simulator is planned in the near future. Version 2 of the orbital database will feature a full upgrade of particle single scattering databases from the Lorenz-Mie method (spherical assumptions in particle shapes) to the Discrete-Dipole Approximation and T-matrix methods to account for the effects of complex structures of snow particles as observed from existing satellite measurements and polarimetric ground-based radar measurements. Microphysics of the WRF-SBM simulation will be further evaluated and improved upon the GV measurements. After the launch of the GPM Core satellite, the GPM satellite simulator will be a useful tool for radiance-based precipitation microphysics evaluation and assimilation methods (e.g., Matsui et al. 2009, Li et al. 2010, Han et al. 2013, Zupanski et al. 2011) using the GPM measurements.

4 TWP-ICE cases are generated from the Goddard Cumulus Ensemble Model with Spectra-Bin Microphysics.

6 THOR is available at http://pps.gsfc.nasa.gov/tsdis/THOR/release.html.