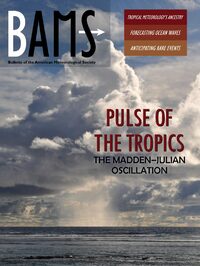 Dynamics and Predictability of High-Impact Weather and Climate Events

There is increasing interest in the links between large-scale atmospheric dynamics and high-impact weather and climate events. Improving our understanding of weather predictability and dynamical processes is vital to improving forecasts of severe weather events and a key part of the international World Weather Research Programme–The Observing System Research and Predictability Experiment (WWRP-THORPEX) program. Similarly, our understanding of climate dynamics is vital for improving predictions of extreme climate events and a key part of the World Climate Research Programme (WCRP) Climate Variability and Predictability (CLIVAR) program. As Earth's climate changes over the coming years, the likelihood of extreme weather events will change most when natural and anthropogenic effects combine.

The International Commission on Dynamical Meteorology (ICDM) of the International Association of Meteorology and Atmospheric Sciences (IAMAS) organized its 2012 international workshop1 to better understand these processes. The workshop marked the centenary of the birth of Ernst Kleinschmidt, one of the pioneers of dynamical meteorology, and covered a range of dynamical systems, including monsoon systems, the El Niño–Southern Oscillation (ENSO), Arctic and Antarctic Oscillations (AO and AAO), tropical and extratropical cyclones, and extreme events associated with those circulation systems. The workshop also addressed predictability on a wide range of time scales, from weather prediction through to seasonal and decadal climate prediction.

What: Over 140 scientists from 27 countries and regions met to review and discuss the status and prospects in dynamics and predictability of high-impact weather and climate events.

Over 140 scientists from 27 countries and regions participated in the workshop. It featured a series of 24 invited lectures, with 18 contributed oral presentations and 107 poster presentations from international scientists. Interested readers are encouraged to visit the workshop webpage (http://icdm2012.csp.escience.cn/) for details of the workshop agenda, presentations, and posters.

In the opening presentation, the increasing skill of the European Centre for Medium-Range Weather Forecasts (ECMWF) forecasts from 1981 to 2011 illustrated that numerical weather prediction (NWP) has made great progress in recent decades. Increases in model resolution, a better understanding of atmospheric dynamical processes, and advances in ensemble and data assimilation techniques have all contributed to the improvements. Opportunities for future progress lie in further decreasing model mesh size (“global meets regional”) and in improving model physics, data assimilation, and observing techniques. Diagnostics of the data assimilation process, where models are confronted with observations, show great potential for guiding model developments and reducing systematic errors for both weather and climate prediction.

Completing the transition from deterministic to probabilistic forecasting is very important for improving the predictions of extreme and high-impact weather events, using ensemble prediction systems. In the THORPEX Interactive Grand Global Ensemble (TIGGE) project, global ensemble forecasts have been collected from 10 global NWP centers. TIGGE data have been used to help develop tools for forecasting tropical cyclones and other high-impact events, from 1 day to 2 weeks ahead.

The seamless forecasting approach promotes the use of the same numerical model across different time scales, ranging from short-range forecasting through seasonal predictions and on to the study of anthropogenic climate change. This approach allows the development of better models to increase the confidence in climate change projections. Systematic error, including lack of statistical reliability, is still a fundamental problem in dynamical forecasting and means that a posteriori corrections are often necessary to obtain useful predictions. Improving initial conditions is still a very important issue, but climate prediction requires many more processes (e.g., sea ice, anthropogenic aerosols, chemistry, etc.) to be included in an Earth system model.

Many TC warning centers have extended the range of track forecasts for TCs to 5 days; extending the range of such predictions to 7 days is the next challenge. Recent studies of the ECMWF 32-day ensemble have shown promising probabilistic predictions of tropical-cyclone-like vortices at longer range.

The new paradigm for understanding the underlying dynamics of secondary eyewall formation was presented. The unbalanced boundary layer response to an expanding circulation is an important mechanism for concentrating and sustaining deep convection in a narrow supergradient wind zone in the outer-core region of a mature TC. Therefore, the boundary layer and its coupling to the interior flow is a key process that needs to be adequately represented in numerical models to improve the forecast accuracy of secondary eyewall formation, including the timing and preferred region of formation. Asymmetric inflow forcing induced by outer rainbands drives the sustained convection outside the primary eyewall during the early phase of secondary eyewall formation, and it too needs to be better understood.

The poleward movement of TCs often leads to a reduction in predictability for downstream midlatitude synoptic-scale weather events. The variation in downstream response is sensitive to the phasing between the TC and the midlatitude circulation during the extratropical transition process. There is a need to improve understanding of the physical processes such as the baroclinic conversion of eddy kinetic energy from available potential energy that contribute to downstream development.

An examination of past TC data and trends indicates that it is premature to conclude that human activity, particularly greenhouse warming, has already had a detectable impact on TC activity. Current models can generally reproduce observed past TC variations, but the “skill” varies both by basin and between different models.

The World Meteorological Organization (WMO) THORPEX program is focused on accelerating improvements in the prediction of high-impact weather. The program is due to finish at the end of 2014. Because of its relevance to the scope of the workshop, a panel discussion was held to discuss the legacy of THORPEX and a possible follow-on program.

The discussion began with a survey of the main achievements of THORPEX, many of which are featured in the workshop program. One of its key successes was to bring together operational weather forecast centers and universities. There have been some very successful THORPEX field campaigns [notably the THORPEX Pacific Asian Regional Campaign (T-PARC) with its focus on TCs in the North Pacific] and some valuable legacy datasets for research, including TIGGE and the Year of Tropical Convection (YOTC). For the future, predicting high-impact weather remains a key issue and is relevant to both weather and climate prediction communities.

HIGH-IMPACT WEATHER AND CLIMATE IN MIDDLE TO HIGH LATITUDES.

Storm and jet stream dynamics can lead to the occurrence of large-scale persistent anomalies, which result in extreme weather and climate events. A range of dynamical mechanisms, including changes in the linear propagation of waves along a midlatitude waveguide, changes in eddy fluxes, and changes in nonlinear eddy life cycles, can affect wave mean flow interactions.

The concept of generalized slantwise vorticity development, which can serve as a useful tool for diagnosing the development of extreme weather systems, was introduced. Its effectiveness was illustrated by a case study in which the movement and intensification of a Tibetan Plateau vortex led to heavy rainfall in the Sichuan province.

Extreme hot spells that affect the west coast of North America are due to large-scale forcing of regional circulations. Extreme hot spells have strong correlations with midtropospheric temperature anomalies and large-scale subsidence. Heat waves in Europe also tend to have particular spatial patterns. A lack of soil moisture is a leading factor in causing particularly severe heat waves, and antecedent moisture deficits tend to occur upwind of the heat waves.

North Atlantic Oscillation (NAO)-like patterns tend to control the frequency of extreme events, especially in winter over the Euro–Atlantic sector. For example, decadal-scale variability of winter cyclones in Europe over the past century has been associated with NAO-like variations. These patterns emerge as responses to a variety of forcing, although it is clear that stratosphere–troposphere interaction is important for the NAO/AO variability on intraseasonal through decadal time scales. Other sources of conditional predictability are emerging, including dependency on the Madden–Julian oscillation (MJO).

Predicting year-to-year variability of East Asian summer climate remains a grand challenge. However, some predictive skill may be derived from the “Indian Ocean capacitor effect” and the Pacific–Japan (PJ) teleconnection pattern. The skill needed to predict extreme weather events during the summer monsoon over India is still poor and lacks certainty. Under a major continental tropical convergence zone (CTCZ) program, more research and process studies are aiming to improve the skill of monsoon prediction from the short range to the seasonal scale through the application of coupled atmospheric–ocean models.

The MJO is thought to affect weather events across the globe. While the current skill in MJO predictions remains limited, there is potential room for improvement that could lead to advances in forecasts of extreme events. The improved representation of tropical convection and its multiscale organization in global models are key to improving the skill of MJO predictions. The Year of Tropical Convection (YOTC) project has been instrumental in improving MJO modeling, especially for high-resolution cloud-resolving models.

Sea surface temperatures have an extensive and significant influence on droughts. For example, the twentieth-century Great Plains multiyear droughts were associated with the Atlantic meridional overturning circulation (AMOC) and a drying of the Sahel was linked to the South Atlantic Ocean dipole. However, the influence of Atlantic basin SSTs tends to be underestimated in current climate models, at least in the context of North American droughts.

This workshop helped pave the way for increased international collaboration to implement these tasks. We plan to publish a book titled Dynamics and Predictability of Large-Scale High-Impact Weather and Climate Events based on the outcome of this workshop.

1 The workshop was sponsored by the WMO, WWRP-THORPEX, WCRP, the International Union of Geodesy and Geophysics (IUGG), IAMAS, the Chinese Association for Science and Technology (CAST), the Chinese National Committee for IUGG, the Chinese Academy of Sciences (CAS), the National Natural-Science Foundation of China (NSFC), the State Key Laboratory of Numerical Modeling for Atmospheric Sciences and Geophysical Fluid Dynamics (LASG) of the Institute of Atmospheric Physics (IAP), the National Basic Research Program of China (2010CB950400), the NSFC Key Project (41030961), Nanjing University, and the Dynamical Meteorology Committee of the Chinese Meteorological Society.