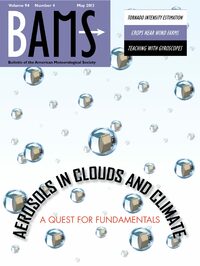 View of six of the 10 towers located in Rapid City, SD. View is looking east-northeast from West Rapid City. Towers are located along a ridgeline that runs north–south through Rapid City (see Fig. 2). Rolling plains are visible beyond the ridge.

Digital elevation maps showing (a) the location of 10 towers on a ridge that runs north–south through Rapid City, SD, and (b) clustered locations of Towers 2–6.

Digital still image of a +CG flash that triggered a subsequent upward leader from a television broadcast tower. 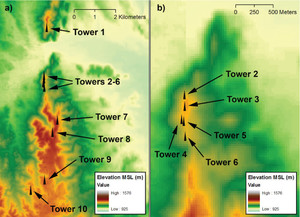 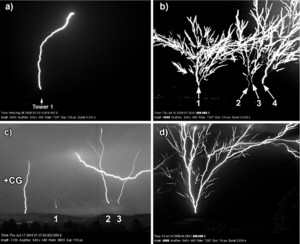 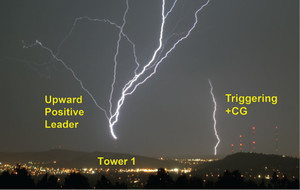 The Upward Lightning Triggering Study (UPLIGHTS) is a three-year National Science Foundation-funded field project that is taking place in Rapid City, South Dakota, from April 2012 to September 2014. Since 2004, GPS time-synchronized optical observations of upward lightning have been conducted from 10 towers in Rapid City. These towers range in height from 91 to 191 m and are situated along an elevated ridge line that runs north–south through Rapid City (Table 1, Figs. 1–2). The height of the ridge reaches approximately 180 m above the surrounding terrain. The natural conditions around Rapid City (open-sky country, low-height urban area, and tower locations) are favorable for optical observations of multiple towers. The working hypothesis of UPLIGHTS is that upward leaders from the towers are primarily triggered by 1) the approach of horizontally propagating negative stepped leaders associated with either intracloud development or following a positive cloud-to-ground (+CG) return stroke, and/or 2) a +CG return stroke as it propagates through a previously formed leader network that is near the towers, and that specific storm types (discussed below) are favorable for the occurrence of upward lightning. This short paper describes the background and observational elements for UPLIGHTS.

Towers located along a ridge that runs north–south through Rapid City, SD.

Observations of upward lightning from tall objects have been reported since 1939. Interest in this subject has grown in recent years, partially because of the rapid expansion of wind-power generation. Impulse corona observed at the tips of towers concurrent with distant flashes led investigators in the 1960s to speculate that these distant flashes may trigger upward leaders. Even though this notion was raised four decades ago, the initiation of upward lightning (e.g., Figs. 3 and 4) is an issue that has yet to be fully investigated.

Reports from recent field observations have begun to address the formation of upward lightning initiation and suggest various initiation mechanisms. For example, as part of a sprite research effort, two instances of negative cloud-to-ground (−CG) strokes were recorded by the National Lightning Detection Network (NLDN) at the location of a 457-m tall tower, and in each case, these strokes occurred within 1 second of a preceding +CG flash that was detected within 20 km of the tower. Subsequent analysis of 405 −CG flashes that followed within 1 second and within 40 km of preceding +CG flashes revealed that −CGs that follow +CGs do not show a statistically enhanced probability of striking structures less than 400 m tall, but do show a more than threefold enhanced probability of striking tall structures greater than 400 m.

More recent research published by Wang and colleagues in 2008 described two types of the electric field changes associated with upward lightning from a windmill and its lightning-protection tower. The first type of change results from a self-initiated upward positive leader from a tall object (i.e., not triggered by preceding flash activity). The second type is associated with a lightning discharge occurring in clouds followed by an opposite change resulting from the development of an upward positive leader, which supports the notion that a preceding discharge rapidly changes the ambient electric field over a tall object and triggers an upward leader from that object.

From 2004 to 2010, 81 upward lightning flashes were recorded (11–12 yr−1) from 9 of the 10 Rapid City towers, with 32 of those observed with high-speed cameras at recording rates between 1,000 and 67,000 images per second (ips). Figure 3 shows some of the upward flashes captured by the high-speed cameras. In all but one of the 81 cases, there was visible flash activity immediately prior to the initiation of an upward leader, suggesting the upward leaders were triggered by the preceding activity (i.e., lightning-triggered upward lightning). In 69% of the cases, visible brightening due to in-cloud leader development propagated toward the towers before an upward leader initiated. Comparison of the optical observations with NLDN data showed there was a preceding NLDN-indicated flash within 0.5 s and within 50 km of the towers for 83% of the cases. Of the remaining 17% (14/81), all but one had visually observed preceding flash activity, but no associated preceding NLDN-indicated event.

Three upward flashes that occurred within a 20-min period were all triggered by a preceding +CG flash. In each case, in-cloud brightening following the +CG propagated toward the towers prior to upward leader initiation. Supporting electric-field data suggested that the approaching in-cloud brightening was horizontally propagating negative-leader development occurring during the +CG continuing current, and that the electric-field change created by the approaching negative leaders caused the initiation of upward positive leaders from the towers. Figure 4 shows a digital still image of an upward leader that developed from Tower 1, 129±17 ms after a +CG return stroke occurred 15.3 km away. Video showed in-cloud brightening propagating from the return stroke location over the tower prior to the initiation of the upward leader.

Although none of the 10 towers had current sensing instrumentation, it is likely that a large majority of the upward flashes were upward negative lightning (i.e., upward-propagating positive leaders). Support for this comes in the NLDN's recording of −CG and negative cloud flash events (−IC) at the tower locations subsequent to initial upward leader development for 36/81 (44%) of the upward flashes.

Upward leaders initiated from more than one tower during 46% (37/81) of the upward flashes. Analysis of one multiple case suggested that upward positive leaders developed nearly simultaneously from four towers after being triggered by a nearby downward +CG flash.

There are a number of reasons why it is important to understand how upward lightning is triggered by nearby flashes and to quantify the types and components of flashes responsible for this triggering. With the increasing number of tall structures being built, there will be a corresponding increase in the number of upward lightning flashes from these structures. Quantifying the contribution of upward lightning to the total flash production in the vicinity of a tower will show how anthropogenic activity likely is increasing the total number of lightning flashes to ground in the vicinity of tall towers and to what scale. A better understanding of how nearby flashes trigger upward lightning will help to quantify the increased rates of lightning events and the increased exposure of these objects to lightning current. It may also result in methods to reduce or eliminate the initiation of upward leaders from tall structures or in improved lightning protection standards, since existing protection standards are based on attachment of downward, CG lightning.

In order to understand the conditions for triggering upward leaders from tall objects by nearby lightning flashes and to determine a quantifiable flash component (e.g., return stroke, horizontal negative leader development) responsible for this triggering, the following questions will be addressed:

As in the past, optical observations will be obtained using GPS time-synchronized high-speed cameras operating from 1,000 to 100,000 ips, along with standard-speed video and digital still-image camera systems. The electric field environment will be sampled using sensors measuring the ambient electric field (electric-field meter) and electric-field change (fast and slow antennae). Furthermore, two VHF interferometers will be used to locate three-dimensional leader development. These electromagnetic data will be time-correlated with optical observations along with NLDN data, which will provide flash type, timing, location, polarity, and peak current for those flashes detected by the network.

UPLIGHTS and the resulting findings may benefit society by increasing understanding of, and safety from, upward lightning from tall buildings, which may contain people, and tall structures that provide services to society such as telecommunications and energy production (in the case of wind turbines). Since extant lightning-protection standards are based on downward lightning, this research may identify unique hazards associated with upward lightning that presently are not known or are not being addressed by the standards. This research may allow for the quantification of upward lightning as a percentage of total lightning and determination of whether there is a meaningful increase in upward lightning by anthropogenic activity. It will help visualization of all types of lightning and therefore improve safety through public education and outreach. The research may result in improved detection of upward lightning by lightning location systems. These improvements would directly benefit lightning location system data users such as power companies, fire managers, and meteorologists, and therefore improve the services they provide to society. Furthermore, high-speed video segments have already been provided to National Weather Service forecast offices for public outreach and education. This collaboration will continue during this proposed research project. Interested readers can see high-speed videos at www.ztresearch.com.