Global quantitative precipitation estimates (QPEs) at higher spatial and temporal resolutions are critical for the development of applications that address a variety of scientific and societal needs. These applications range from short-term forecasting of landslides and floods to long-term climate impact studies. Because much of Earth is covered by oceans and sparsely populated land regions, the only viable means for obtaining long-term global precipitation records is from satellite-based observations. Satellite precipitation products are derived from a variety of sensors located on geostationary (GEO) and low-Earth-orbiting (LEO) satellite systems. GEO satellite systems provide relatively frequent visible (VIS) and infrared (IR) cloud-top information, while LEO satellites include passive microwave (PMW) instruments. PMW observations provide relatively good estimates of precipitation because of the strong relationship of the retrieved signal from hydrometeors (rain and snow) within the cloud. These observations, combined with space-based radar observations from the Tropical Rainfall Measuring Mission (TRMM) precipitation radar (PR), have provided the science community a nearly unbroken data record of spaceborne radar and PMW observations of tropical and subtropical precipitation systems for over 15 years (as of March 2013). In recent years, there has been significant development of multisensor techniques that combine information from the available satellite sensors to provide global precipitation products with uniform coverage at finer scales and with greater accuracy.

THE SIXTH WORKSHOP OF THE INTERNATIONAL PRECIPITATION WORKING GROUP

In an effort to improve global QPEs, the International Precipitation Working Group (IPWG) was initiated in 2001 as a permanent Working Group of the Coordination Group for Meteorological Satellites (CGMS). IPWG provides a forum for experts in precipitation research to improve the scientific understanding of precipitation observations, leading to the development of improved precipitation estimates. Since its inception over 12 years ago, IPWG has pursued its goals by holding biennial workshops, organizing specialty workshops, and pursuing long-term cooperative projects among participants (currently over 280 members from 39 countries). The sixth workshop of IPWG (IPWG6) is the latest in a series of biennial workshops that builds upon the recommendations of the fifth workshop (IPWG5) held in Hamburg, Germany, in October 2010 (Huffman and Klepp 2011). IPWG6 was organized over four days and included a combination of 65 oral and poster sessions that focused on international projects and satellite programs, climatology of precipitation, precipitation datasets, algorithms, applications, validation, and new technologies. Following the presentations, IPWG6 attendees participated in breakout sessions for three working groups: Applications, Research and New Technology, and Validation. All the materials from the workshop are available on the IPWG website: www.isac.cnr.it/~ipwg/meetings/saojose-2012/Saojose2012.html. The following sections summarize the meeting highlights and working group recommendations.

IPWG continues to expand its coordination with other international working groups. For example, IPWG validation activities now include model-generated precipitation estimates, which are being coordinated with the CGMS Working Group on Numerical Experimentation (WGNE). IPWG serves as the lead for the Group for Earth Observations precipitation activity, with the goal of ensuring that users have access to stable, state-of-the-art, characterized, global precipitation datasets.

Program status updates became a focus of discussion in the presentations and posters. From an operational view, there was a request for IPWG to evaluate precipitation retrieval techniques, develop a consistent verification methodology, and improve methods to access precipitation datasets. Additionally, there was a request to members for more research to assist in operationally integrating rainfall estimates for a variety of hydrometeorological applications.

There were several presentations focusing on new satellite systems. The joint U.S.–Japan Global Precipitation Measurement (GPM) mission launch is on schedule for early 2014 (http://gpm.gsfc.nasa.gov). It is anticipated that the GPM satellite will overlap with the highly successful TRMM satellite, which has provided over 15 years of high-quality space-based precipitation radar measurements. The joint French–Indian Megha-Tropiques satellite mission was successfully launched on 12 October 2011 (http://meghatropiques.ipsl.polytechnique.fr/). Its instruments are functioning normally, but issues with data transmission have resulted in a several-month delay for releasing data to the public. Japan launched the LEO Global Change Observations Mission 1–Water (GCOM-W1) satellite on 18 May 2012. The observation period began on 3 July 2012. It is expected that the initial Level 1 (L1) data will be made publically available through the GCOM-W1 data service (https://gcom-w1.jaxa.jp/) in early to mid-2013.

Two presentations focused on the development of innovative datasets. First, the creation of regionally averaged precipitation estimates for an area of interest (e.g., river basin, country, etc.), based on applying shapefiles to the global gridded precipitation datasets, would provide greater accessibility to precipitation data for nonexpert users. Second, precipitation datasets are traditionally mapped to a latitude–longitude grid. Distortion has not been a critical issue because data collection has been limited to a band from 60°N to 60°S latitude, but this is changing as datasets become more global (e.g., GPM). New mapping approaches, such as polar grids, local area mapping, and Gaussian grids, minimize distortion in the polar regions.

Several presentations highlighted efforts to improve precipitation algorithms, especially over land, which would require further improvement in PMW retrievals. This is a difficult problem owing to the dynamic nature of the underlying surface emissivity, and progress seems to depend on physically based modeling of surface conditions (soil moisture, vegetation water content, and temperature) in addition to statistically based modeling. Another significant effort focuses on the development of satellite snowfall detection and rate retrievals over land using multiple-channel retrieval techniques employing microwave sounder observations. Algorithms using microwave sounder channels are showing promise in distinguishing between frozen (snow, hail) and liquid precipitation. Additionally, algorithms that combine multiple satellite sensor information (LEO and GEO) with surface observations and numerical weather prediction (NWP) products have the potential to improve QPEs, especially for light rain, shallow precipitation, and orographic precipitation events.

A final highlight of the workshop focused on recent efforts to create an integrated multisatellite precipitation dataset in preparation for GPM. Integrated Multi-Satellite Retrievals for GPM (IMERG) is a unified U.S. algorithm that takes advantage of the Kalman filter Climate Prediction Center (CPC) morphing technique (CMORPH) from the National Oceanic and Atmospheric Administration (NOAA); Precipitation Estimation from Remotely Sensed Information Using Artificial Neural Networks (PERSIANN) with cloud classification from the University of California, Irvine; and TRMM Multisatellite Precipitation Analysis (TMPA) from the National Aeronautics and Space Administration (NASA). The IMERG precipitation products are designed to provide 0.1°, 30-min global data at 4-h, 12-h, and 2-month latencies. As well, the Japanese Global Satellite Map of Precipitation (GSMaP) product continues to be developed, with particular attention given to difficult retrieval situations, such as over complex topography and land in general, and the addition of new satellite estimates.

The three IPWG working groups met over a two-day period to discuss critical issues in global precipitation. The main recommendations from the working groups are summarized in Table 1 and are discussed below. 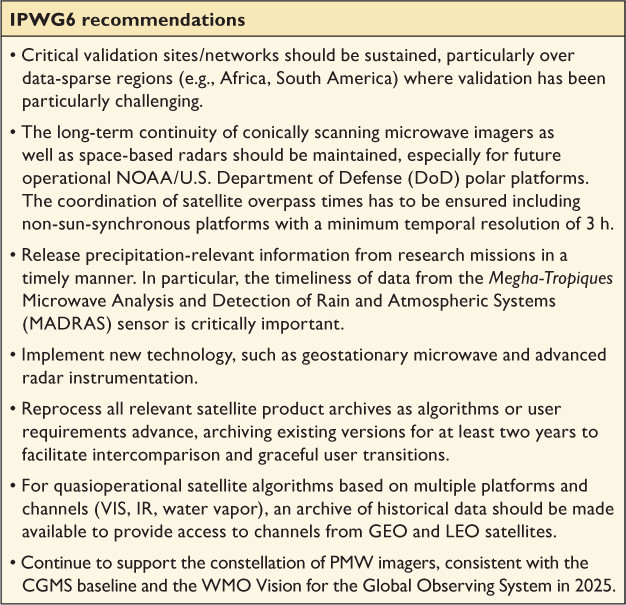 The Applications Working Group (AWG) discussed the use of precipitation data. The first topic was training. AWG pointed out that, although IPWG members mostly lack expertise in organizing training, they have considerable background in subject matter. AWG recommended that a training focal point be identified, a list of training opportunities and pool of experts be developed, and that IPWG include educational links and establish a “frequently asked questions” (FAQ) section on its web page. AWG also discussed the need to provide information about user requirements, and recommended providing a link to the GEO user survey materials and to the WMO “observation requirements” pages. Next, AWG discussed data format and access issues with a focus on making satellite precipitation products more accessible. The group agreed that a list of links to relevant data portals—including Goddard Earth Sciences Data and Information Services Center (GES-DISC) Interactive Online Visualization and Analysis Infrastructure (GIOVANNI)/TRMM Online Visualization and Analysis System (TOVAS), International Research Institute (IRI), National Center for Atmospheric Research (NCAR), Committee on Earth Observation Satellites (CEOS), and Group on Earth Observations—should be made available on the IPWG website. Finally, AWG discussed the critical need for the continuation of PMW imagers. The group considers conical-scan imagers that provide both window and nonwindow channels [such as the Special Sensor Microwave Imager/Sounder (SSM/IS) and GPM Microwave Imager (GMI)] to be key to the collocation, consistent spatial resolution, and channel selection needed for estimating precipitation. The AWG strongly supports actions to strengthen the international constellation of passive microwave imagers, including the recent launch of Megha-Tropiques and GCOM-W1, the development of GPM, and the announced plans for the European Organisation for the Exploitation of Meteorological Satellites (EUMETSAT) Polar System-Second Generation (EPS-SG) series and future GCOM-W satellites.

The Research and New Technology Working Group (RNTWG) recognizes that light rain/snow retrievals at high latitudes, probabilistic rain/no rain determination, and precipitation retrievals over snow are difficult research challenges and support efforts to improve satellite retrievals in these focus areas. RNTWG noted the potential benefit of multispectral and multisensor techniques and recommends the development of these methods to create and sustain datasets containing input that is standardized, multispectral, and globally consistent. The group supports the continued development and use of ground radar, radiometric information from space, cloud radar, and model data, which are critical in understanding subcloud evaporation and light rain over land and the ocean. Error and uncertainty information is considered very important for products used in hydrological and other applications, and retrieval error characterization should be included in both retrieval development and all precipitation products in a format suitable to the users. As societal needs for early detection of extreme precipitation events increase, RNTWG encourages the development of better sensors and retrievals capable of detecting extreme precipitation. The existence of long-term Special Sensor Microwave Imager (SSM/I) and SSM/IS data records is critical for long-term climate monitoring. In this regard, the group encouraged further work on processing the SSM/IS dataset in order to extend the fundamental climate data record for precipitation. RNTWG discussed the issue of future PMW imager sensor design, recommending testing of additional microwave spectral channels (e.g., 118, 220, 340 GHz, etc.) in the context of NWP applications and storm intensity/track predictions.

The Validation Working Group (VWG) identified a critical issue with the lack of high-quality rain gauge reports in near–real time reaching the precipitation research community, which presents a major barrier to evaluating satellite precipitation products, especially in data-sparse regions such as Africa and South America. In these and other data-sparse regions, VWG encourages archive centers of data (particularly at the National Hydro-Meteorological Service level) to make surface precipitation datasets available to help with validating satellite precipitation estimates. VWG recommended expanding the IPWG web pages to include example validation techniques and documentation on how to use the techniques. The group encouraged expansion of daily precipitation validation activities to other countries that have good surface-based precipitation networks (such as South Africa and South Korea), recommended that all sites summarize results from daily validation sites on a 3-month basis to provide more useful information to algorithm developers, and encouraged validation of precipitation datasets in hydrological models. Finally, given the increased importance of snowfall as global precipitation datasets expand to higher latitudes, VWG recommends that efforts be made to collect and make available snowfall datasets.

The IPWG community continues to be a central resource for precipitation research, global precipitation datasets, and application development. Future directions include greater links with the other CGMS working groups. IPWG continues to serve as the point of contact for Group for Earth Observations precipitation activities. The two new incoming co-chairs who will lead IPWG over the next two years were appointed (and subsequently confirmed by CGMS) at the end of IPWG6: Nai-Yu Wang (University of Maryland) and Kazumasa Aonashi (Japan Meteorological Agency). The next IPWG workshop is planned for 2014 in Japan. IPWG is a community effort, and all those interested in participating are encouraged to visit the IPWG website (www.isac.cnr.it/~ipwg/IPWG.html) for the latest information on activities and upcoming meetings.