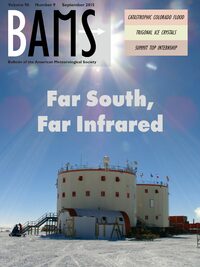 Under the sponsorship of the Natural Science Foundation of China (NSFC), a symposium on boundary layer meteorology was held at Nanjing University of Information Science and Technology (formerly Nanjing Institute of Meteorology) in Nanjing, China, in October 2014. This is the 11th such gathering for China’s community of boundary layer meteorology. Its goal was to map a vision for China’s research program in this field. In a departure from the traditional meeting format, no time was allotted to individual presentations. Instead, the 110 participants of this 2-day event were grouped into seven thematic areas and were charged with the task of prioritizing research directions in each area. The seven thematic areas are as follows: 1) mechanisms of boundary layer turbulence and wind energy utilization; 2) atmospheric boundary layers (ABLs) on the Tibetan Plateau; 3) ABLs over complex terrain; 4) ABLs over water, snow, and ice; 5) roles of boundary layer meteorology in atmospheric data assimilation and regional models; 6) ABLs over urban areas; and 7) chemical processes in the boundary layer. Each theme was led by a discussant and a rapporteur. Day 1 of the symposium was devoted mostly to the breakout sessions. At the end of the day, the discussants and the rapporteurs met to identify overlaps and cross-cutting topics. Day 2 of the event consisted of presentations by the discussants on their group’s recommendations, top-down synthesis, and invited keynote speeches. Almost all the current and past grant awardees of the NSFC ABL program attended the symposium.

What: China’s community of boundary layer meteorologists met to map a 5–10-yr vision for China’s research program in this field.

The symposium aimed to bring the community’s research efforts into sharper focus. Research projects supported by NSFC, largely initiated by the investigators themselves, fall into three categories: grants for young investigators (typical size of CNY 300,000 or USD $50,000), general grants (USD $150,000), and strategic grants (USD $500,000). Having the ability to shape the field, grants in this last category are the most competitive: each proposal is reviewed anonymously by six experts and must minimally be ranked as “excellent” by four experts and “very good” by another two or excellent by five experts and “good” by at least one in order to be further considered by a review panel and by the ABL program. Currently, these strategic efforts are not coordinated. The synthesis emerging from the symposium should help channel resources to a select number of topics, yielding deep insights and potentially path-breaking results. Since future proposers and reviewers were among the participants, consensus on priorities increases the likelihood that an innovative proposal that deals with one of these priority areas will receive strong peer endorsement.

Societal relevance and scientific novelty are two considerations that guided the breakout and the subsequent synthesis discussions. An accepted view is that building linkages to allied disciplines will inject vitality into the field. Five priority areas are thought to strike a good balance between these two considerations. A brief summary of each priority area follows.

Owing to a rapid increase in pollution emissions from fossil fuel consumption, smog is a common occurrence in eastern China. We lack basic data for characterizing the structures of the ABL under smoggy conditions. Questions to be answered are, How different is this new type of ABL from cloud-free and cloud-topped ABLs? How do we determine the ABL top? How does atmospheric stability vary with height? What is the relationship between the surface friction velocity and the geostrophic wind? Much is known about the role of physical processes in pollution dispersion. Some recent studies have investigated the effect of turbulent motion on chemical reactions. However, a knowledge gap exists on the interactions between smog and the physical state of the boundary layer. Not much is known about how atmospheric chemistry impacts the ABL energy balance and the kinetics of air turbulence. The persistent nature of smoggy conditions invites the hypothesis that a feedback exists between the physical and chemical states of the ABL. This feedback may involve a tipping point, across which the ABL switches from one physical state to a more stable state, that exacerbates severity of the smog. It is not known if these interactions are regulated simply by aerosols’ radiative properties or if more complex processes, such as enhanced turbulent kinetic energy (TKE) dissipation via some chemical properties, are at work.

The ABL on the Tibetan Plateau poses numerous challenges. Even some basic concepts of boundary layer meteorology are called into question. i) According to some estimates, the ABL on the plateau can be as deep as 4 km. The situation is paradoxical: this thick air layer feels the influence of surface heating and cooling on a diurnal time scale, and yet it is not a “boundary layer” in the strict fluid mechanics sense, which characterizes the boundary layer as a thin layer of fluid at the flow boundary. ii) In low-altitude ABLs, the lifting condensation level usually coincides with the vertical extent of the mixed layer and the Ekman layer. It is not known if similar relationships exist over the plateau. iii) Another open question is whether the geostrophic relation still holds above such a thick air layer. iv) The Tibetan Plateau is often called the “Third Pole,” implying that our current knowledge about the biosphere–atmosphere interactions near the North and South Poles can be extended to the plateau. This temperature-based analogy is incomplete. A more complete understanding should also consider other abiotic factors that are known to be important to ecosystem functions and are unique of the plateau environment, such as strong solar radiation and low CO2 density. v) Model parameterization of land surface interactions should consider these two characteristics, as well as the strong topography-induced impacts on the ABL flow. vi) The deep ABL above this high plateau (mean plateau elevation is 4.5 km by some estimates) means that surface-driven convective mixing can almost reach the tropopause. Therefore, ABL mixing may represent a mechanism that effectively short-circuits the transport of chemical species between the surface air and the stratosphere. Thanks to heavy investment by NSFC and other governmental funding agencies, infrastructure is now in place to tackle these challenges.

Large urban clusters are a ubiquitous and unique character of China’s landscape. Because urbanization is a core objective of the central government’s socioeconomic agenda, the number and size of urban clusters will continue to grow. The symposium participants advocate investment in urban ABL studies, at levels that should rival those for priority area 2. Urban heat islands in urban amalgams are much stronger than in isolated cities. The clustering of cities may also generate measureable effects on regional weather. Intensive field campaigns, similar to the Boreal Ecosystem–Atmosphere Study (BOREAS) and the Large-Scale Biosphere–Atmosphere Experiment in Amazonia (LBA), are needed to understand issues on upscaling and to identify key morphological attributes for urban land surface modeling. There is also a need for long-term, coordinated observational networks to monitor the surface energy balance, boundary layer structures, and trace gases. Some of the observations can be made on the top of tall buildings (>200 m in height) that encompass the urban canopy layer, the roughness sublayer, the entire inertial sublayer, and a portion of the mixed layer. Unlike North American cities, where high-rise buildings are usually concentrated in the urban core, tall buildings in Chinese cities tend to be scattered across the whole urban airshed. These measurements are in the mixed layer and have source footprints larger than the scale of a neighborhood. Areal average urban ABL characteristics can be obtained by using advanced scintillometry and unmanned aviation vehicles. In parallel to the observational studies, it is imperative to build seamless coupling among mesoscale weather prediction models, regional climate models, and large-eddy simulation models that can be used to investigate multiscale interactions from regional and city clusters to building scales, and to explore strategies for mitigating urban heat islands.

Some symposium participants argued that big science requires big datasets. The value of a dataset is greatly enhanced if the data are openly shared and the data processing procedures are transparent and follow community guidelines. Data sharing makes synthesis studies on cross-cutting questions possible. The practice of posting experimental data openly for public use is not common in China. Several laboratories have been conducting tall-tower observations in urban environments. If posted openly and in real time, their data are excellent materials for courses in boundary layer meteorology. They can also be used to form a “golden dataset” for validation studies of urban land surface models. A spin-off effect of such validation efforts is that, once validated, these models can be used directly to help inform issues of local interest, such as urban heat island mitigation. Similarly, dozens of flux stations have been in operation on the Tibetan Plateau, and data sharing is essential if real progress is to be made in priority area 2.

Despite the large turnout at the symposium, the number of scientists that are actually conducting ABL research is limited. The number of Chinese colleges that offer courses on boundary layer meteorology has been declining steadily. Capacity building is therefore a top priority. One such effort is a summer course on boundary layer measurement techniques. The course content may include principles of state-of-the-art boundary layer measurements, such as wind radar, lidar profilers, and eddy covariance. The highly successful summer isotope course taught at the University of Utah is a useful model for this course. It is suggested that this course be team taught, with instructors sought from leading ABL groups in China and abroad, and that it should combine theory with hands-on modules. Capacity building is a community activity and is possible if sustained financial support exists.