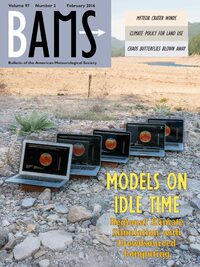 Maps with cities where (left) stakeholders and (right) participants came from. Size of the circle indicates relative number of participants. 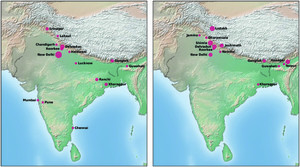 What: Thirty stakeholders from the Himalayan area together with scientists who work in this region discussed climate change information needs for Indian Himalayan states.

Here we present results of a workshop designed to bring together stakeholders from different states of the Indian side of the Himalayan arc and an international group of climate scientists in order to discuss how climate change research for this region can be tailored toward the needs of local communities. The stakeholder workshop was jointly organized by the Jawaharlal Nehru University (JNU), New Delhi, India, and the Climate Service Center 2.0, Hamburg, Germany, within the framework of the multidisciplinary international research project GLACINDIA. The project focuses on the water-related effects of changes in glacier mass balance and river runoff in western Himalayas. Given the research focus of the GLACINDIA project, the initial focus of the workshop was on glacier-related hydrological information. During stakeholder interactions the resulting discussion covered a much broader range of urgent climate change information needs for the Himalayan region.

In total, 30 stakeholders were invited to participate in the workshop. Among them, the minister of the Ministry of Environment, Forest, and Climate Change, government of India, who participated in the opening ceremony together with the Norwegian ambassador to India. The minister highlighted the importance of better scientific understanding of climate change consequences for the region. Such attention encouraged many stakeholders to take part in the workshop.

The main objectives of the GLACINDIA project were introduced at the beginning of the workshop and the concept of climate service information was briefly discussed. A major focus of the workshop was given to breakout groups to identify data and information needs. Based on their backgrounds, participants formed four discussion groups along the key sectors: water, land use and agriculture, ecology, and energy. For each group, a group leader and a rapporteur were assigned.

To guide the discussion within the working groups, two basic questions were offered:

Discussions within the working groups lasted for about three hours and the group leaders and rapporteurs presented results at the following plenary session. This was followed by a discussion among all participants and a final sum-up of the preliminary workshop results by the board members.

Below we present the feedback that was provided by each group, as well as topics that were common for all.

This was the largest group and it was noted by many participants that water is the topic integrating all four groups. The main source of water in the Himalayas is snow and rainfall that is brought by monsoonal winds (in case of the central and eastern Himalayas) and the westerlies (in case of the western Himalayas) largely by midlatitude cyclones. In this respect, there is a need for long-term high-resolution monsoon data in the form of observational or reanalysis products, as well as projections of the monsoon change, that can be condensed in a form of monsoon pattern change maps or indices.

Winter precipitation, especially as snow, is very important to know since this determines the amount of water that will be available the following spring for crop growth. For the same reason, air temperature in the high-elevation regions has to be determined precisely. Other necessary variables related to water availability during the spring season include snow cover duration and snow/water equivalents at different altitudes, winter flows, winter temperature rise, ground temperature, soil temperature, and moisture. All variables have to have associated information on uncertainty.

Variations in the seasonal cycle of water-related variables have a significant impact on biological activity in the region. Therefore, information not only about absolute changes, but also about changes in seasonality should be provided.

There is a set of hydrological variables that are urgently needed on basin or even subbasin scale for adaptation measures in the region. These include information about wastewater availability in winter, surface water–groundwater interactions, groundwater recharge potential, streamflow, runoff, and difference between peak flow and runoff.

Land use and agriculture group.

The distribution of the population in the Himalayas is not uniform, with many regions very sparsely populated. Climate information relevant to agriculture should concentrate on more densely populated areas. In the high-latitude regions, there are serious constraints on agriculture imposed by climate and availability of fertile ground. Agriculture is a challenging activity and might be more challenging in the future as a result of climate change. Since there is not enough usable land, productivity is very low, and climate change will possibly further decrease the amount of land available for agriculture. One of the main problems nowadays is heavy intense rainfall that brings a lot of precipitation during several days instead of spreading it over the whole seasons. In particular, when thinking about agricultural adaptation in the region, one has to consider following regionally important activities: adaptation of cropping pattern, crop rotation, fishing, beekeeping, etc.

The main climate-related variables identified for this sector are number of rainy days, temperature, rainfall, extreme weather events (high-intensity rainfall, droughts), frost days, fog days, and snow amount. These variables are required regionally at a “microlevel.” The reason is the very large orographic gradient in the region, leading to rapidly changing environmental conditions.

In ecological applications for the Himalayan region, a river basin or catchment is usually used as a study unit. Therefore, data and products have to provide information if not at the local level, then at least on a catchment level. Key parameters that are important for ecological studies in the region are flow volume, tree line shift, information about phenology and regeneration, breeding habits/behavior, loss of natural springs, migration/corridors, and socioeconomic value change and dependency. The main threads to environment are roads, hydroelectric power projects, glacial lake outburst floods (GLOF), intense rainfall floods, landslide dam outburst floods, encroachment, and loss of traditional knowledge.

Data requirements for this sector repeat those for the previous two sectors, with the addition of glacier maps with attributes of each layer and projected glacier outlines.

Most of the energy in the region is coming from hydropower of different scales. Hence, requirements of this group of stakeholders are quite similar to the water group. One of the main additional requirements is construction of longer time series of climate variables for the region, based on, for example, proxy records. There is also need for climate information to support development of additional energy sources such as solar, wind, and nuclear power.

IN WHAT FORM SHOULD CLIMATE SERVICE INFORMATION BE PROVIDED?

Stakeholders from all groups agreed that climate change information has to be provided in different forms for different target groups. Government and academic scientists need access to the raw data, together with uncertainty information. Policy makers prefer synthesized information products in condensed form, such as executive summaries, fact sheets, and web atlases. NGO members prefer to have more detailed reports on the microlevel scale. Given the specifics of the region, in particular limited literacy and many regional languages, a number of ways to communicate climate information to the general public were suggested: TV shows, mobile phone applications, community radio programs, street plays, and display of important weather information in the printed form at all nodal places in the cities and villages. In addition, engagement of the school teachers and school children in the climate change theme was stressed as an important way of spreading the information.

COMMON FOR ALL GROUPS.

On top of the individual requirements listed above, there were two reoccurring topics for all the groups:

The stakeholder workshop was followed by a 2-day training program on climate modeling and climate change research for early career scientists. The program consisted of lectures given by Indian and international scientists on recent achievements in research of Indian monsoon and Himalayan glaciology, as well as laboratory sessions, where basic skills in working with climate-related information were taught. This program brought together 30 early career geoscientists from many Indian states (Fig. 1), who study different topics of the Himalayan region. The program was a success, providing the early career scientists information on a wide range of research information and skills. Additionally, the training program was a starting point for the establishment of networks within early career scientists working on the same region but from different perspectives.

This workshop was to our knowledge the first effort along these lines in India. It was a successful activity and highly valued by participants. There was a strong desire to continue the dialog between stakeholders and scientists and make this workshop a regular event. The training program also garnered a strong positive response from the students, especially the part related to glacier modeling and using programming language (Python) for climate data processing, and there are plans to repeat it.

The dissemination of the results from the GLACINDIA project will be tailored toward needs expressed by the stakeholders. In particular, the variables that stakeholders have identified as important will gain additional attention and will be presented in easily accessible form [plots, figures, comma-separated value (CSV) files]. There will also be an attempt to create a prototype version of the desired web portal with metainformation about water-related measurements in the region.