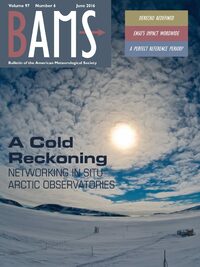 Number of CloudSat profiles binned into 2.5° × 2.5° regions using Jan 2008 observations over 60°N–90°N. Black lines are individual orbits made by CloudSat for one day of observations.

(a) Location of the Greenland Climate Network (GCnet) ground-based instruments used to construct the surface net radiation annually average biases between GCnet and the collocated measurements from satellite and reanalysis products. (b) Biases are derived from the differences in the monthly means calculated from the 2007–10 period (CERES, red; CloudSat, blue; GEWEX-SRB, green; NCEP, pink; ECMWF, yellow; MERRA, teal; ASR, maroon). (c) Monthly cloud-cover fraction over Greenland derived from CloudSat/CALIOP is binned as a function of height above the surface. (d) The root-mean-square error in the net surface radiation for each product is calculated by averaging the bias from all ground-based sites. Panel (a) was obtained from the Cooperative Institute for Research in Environmental Sciences web page.

Schematic diagram of the hydrological cycle depicted for the Arctic (70°–82°N). Precipitation (downward blue arrow) and evaporation (upward red arrow) were estimated over land and ocean regions separately. Calculations were weighted by both the cosine of the latitude and fraction of land in each grid. Runoff (purple arrow) is estimated over land, and precipitation minus evaporation was estimated over the entire Arctic region. Annually averaged estimates of the moisture fluxes were calculated for the period 2007–10 using CloudSat, GPCP, GPCC, GLDAS, CMAP, NCEP, MERRA, ECMWF, and ASR (where available). 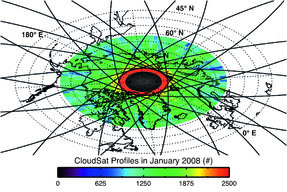 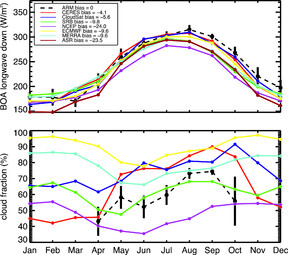 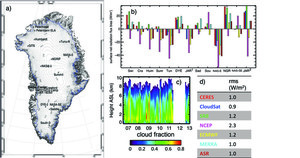 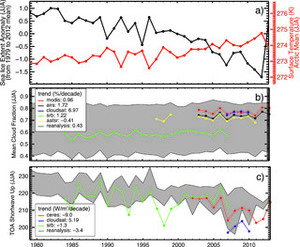 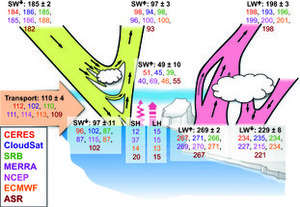 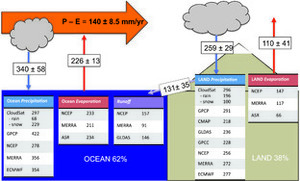