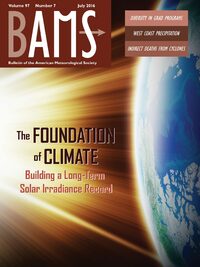 SCIENTIFIC CHALLENGES AND OPPORTUNITIES IN THE NASA WEATHER FOCUS AREA

Weather covers atmospheric phenomena with time scales from minutes to about two weeks and with spatial scales from local to global. It also covers the subseasonal to seasonal time scale that bridges weather with climate.

The importance of weather is succinctly summarized in NRC (2010). Weather forecasts provide information that people and organizations can use to enhance these societal benefits and to reduce weather-related losses. Investing $5.1 billion annually in public weather forecasts and warnings has brought an estimated $31.5 billion dollars in benefits. Yet between 1980 and 2009, there were 96 weather disasters that each cost more than $1 billion—and cost many lives.

However, in the past decade, climate and Earth system research has received much more attention than weather research in the United States. For instance, for the 30 National Research Council (NRC) reports since 2008 that are related to the Board on Atmospheric Sciences and Climate, only 5 reports were devoted to weather and 3 more were related to both weather and climate.

National Aeronautics and Space Administration (NASA)’s Earth Science Division initiated a process for advanced planning of its weather focus area, which is one of six focus areas within the division (the other five being atmospheric composition, climate variability and change, water and energy cycle, carbon cycle and ecosystems, and earth surface and interior). The current research programs of the weather focus area were developed nearly 10 years ago.

As input for this weather focus area planning activity, a community workshop was held on 7–9 April 2015 to produce a report examining the scientific challenges and opportunities in weather research. About 70 invited participants representing a cross section of the weather research community attended this workshop, including individuals from government agencies, academia, the private sector, the international community, and other organizations.

The workshop mixed broad review talks, in-depth research discussions, and more than 40 one-slide presentations on day 1, followed by breakout discussions on day 2. The first breakout session focused on three themes: convection and precipitation, planetary boundary layer and ocean/land surface, and clouds and radiation. The second breakout session focused on three different themes: science questions, new instruments/technology, and modeling/data assimilation. Plenary discussions followed the breakout sessions to expose the attendees to the main conclusions from each breakout, and to allow for additional cross-theme input to the formulation of recommendations for the workshop report. Highlights from the workshop conclusions are reported below.

Using NASA’s capabilities in observations, modeling and data assimilation systems, instrument platforms, and computing facilities, a variety of fundamental science questions can be addressed in the weather focus area.

For weather prediction and predictability, the questions include the following:

For convection and precipitation, the questions include the following:

For planetary boundary layer and land/ocean surface processes, the questions include the following:

For clouds and radiation, the questions include the following:

Complete answers to these questions require a broad range of investments, from making new observations designed to focus on processes at work in various parts of the Earth system, through systematic modeling studies designed to examine processes at the microscale and macroscale, as well as in the context of the global weather.

Further, as new components of the global observing system become feasible, quantitative studies of their impacts and cost benefits need to be made, such as through the use of observing system simulation experiments (OSSEs). Seeking answers to these questions led to four recommendations for measurements and OSSEs, and three recommendations for modeling, data assimilation (DA), and computing. These recommendations and the abovementioned science questions represent a snapshot of the community’s views on selected topics most relevant to NASA’s observations, research, and application portfolios, rather than a comprehensive review of all weather-related topics.

The transitions from investment in new technologies to building new instruments, and to developing new missions, are an essential part of developing new observations. Bringing new missions to fruition requires methods to estimate the success of the technological development and the likely cost effectiveness of the observations. OSSEs provide a tool to assess the impacts of new observations, in the context of the existing observing system, and hence contribute to estimating the value of potential new missions.

The weather focus area should take ownership of a NASA Earth science OSSE capability for assessing the impact of measurements and measurement systems on the ability to answer weather and related science questions. In this way, mission systems trade studies can be done against science impact and mission cost and technology development. Serious consideration should be given to increasing NASA and National Oceanic and Atmospheric Administration (NOAA) interagency collaborations, including evolving the current shared OSSE elements into a common unified infrastructure.

Global measurements of the spatiotemporal (four-dimensional) evolution of large-scale horizontal wind vectors are urgently needed. It is important to avoid all-or-nothing strategies for the three-dimensional wind vector measurements, as important progress is possible with less than comprehensive observing strategies. Some additional trade studies may still be needed to design the most cost-effective strategy for wind measurements (based on lidar, radar, and atmospheric motion vectors) from satellites and airborne flights.

Recommendation on temperature and humidity measurements.

Continuous investment in temperature and humidity measurements is needed, particularly focusing on higher spatial and temporal resolution, and synergistic measurements involving multiple instruments, different platforms (geosynchronous, low Earth orbit, and airborne), and different types of satellites (including small and CubeSat). Better measurements from space of the temperature, water vapor, and wind in the boundary layer are needed, in particular to estimate more accurately from space ocean/land surface turbulent fluxes that are closely coupled to boundary layer and convection processes.

Recommendation on cloud and precipitation measurements.

Continuous investment in cloud and precipitation measurements is needed, particularly focusing on higher spatial and temporal resolution, and synergistic measurements involving multiple instruments (e.g., radar, radiometer, and lidar observations), different platforms (geosynchronous, low Earth orbit, and airborne), and different types of satellites (including small and CubeSat). Particularly relevant to these measurements is the estimate of the vertical velocity.

Modeling, data assimilation, and high-end computing are an integral part of the NASA weather focus area. A sustained modeling and assimilation framework would also promote the transition of suitable research-type observations into operational systems at the National Weather Service at NOAA.

Global high-resolution modeling (convective permitting with grid sizes of 1–5 km) should be pursued as an essential contribution to the broad national and international modeling activities and to NASA mission planning. This involves the research support of dynamic core, physical processes, software engineering, and high-performance computing. Research on, and development of, other high-resolution models (e.g., mesoscale, cloud-resolving, and large-eddy simulation models) also need to be pursued in parallel.

NASA should match the supercomputing capability and capacity with the growth in a sustained, high-resolution modeling capability directed at using all observations to their fullest extent in weather prediction and at planning for new global observations. Enhanced data-distribution techniques (e.g., storage proximal analytics) are also needed for data access and discovery.

At the same time, NASA has a unique role in weather research (as reflected by the above science questions and recommendations) through the Weather Focus Area, relative to its partners. NASA is the only agency in the United States with the capability to develop new technologies and satellite missions for the above measurements. This also requires NASA’s leadership role in OSSEs.

While modeling, data assimilation, and computing efforts are also covered by NOAA, the National Science Foundation (NSF), the Department of Defense (DOD), and the private sector, NASA’s unique role is to focus on modeling and data assimilation that will help NASA mission planning and assimilation of new measurements. In this way, NASA will accelerate the transition of technology, instruments, observational data, modeling, and data assimilation to operations (e.g., at NOAA) and applications. This also requires NASA’s sustained investment in supercomputing capability and capacity.

Finally, while NOAA, NSF, DOD, and, to a lesser extent, the private sector, perform weather research, NASA’s unique role is to use its capabilities in instrument technology development and new mission conceptualization to pioneer the next generation of instrument platforms, observations, and modeling and data assimilation systems to address these science questions.

The full report (including the list of participants and their contributions to the draft report) is available online (http://science.nasa.gov/earth-science/focus-areas/earth-weather/).