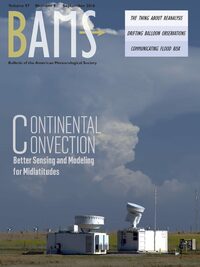 Marine low clouds have a large impact on Earth’s energy and hydrologic cycle. They strongly reflect incoming solar radiation, with little compensating impact on outgoing longwave radiation resulting in a net cooling of the climate. The representation of marine low clouds in climate models is one of the largest uncertainties in the estimation of climate sensitivity (e.g., Bony and Dufresne 2005), and marine low clouds are critical mediators of global aerosol radiative forcing (Zelinka et al. 2014). Despite the importance of these cloud systems to Earth’s climate, their parameterization continues to be challenging because of an incomplete understanding of key processes that regulate them and insufficient resolution of these processes in models.

To help define research pathways to address outstanding issues related to our understanding of marine low clouds, a workshop was held 27–29 January 2016 at Brookhaven National Laboratory. The overarching goal was to identify current gaps in knowledge or simulation capabilities and promising strategies for addressing them, with a particular emphasis on improving the representation of marine low clouds in climate models and on contributions that could be made with U.S. Department of Energy Atmospheric System Research support using Atmospheric Radiation Measurement facility measurements.

CCN influence low clouds by changing the cloud droplet concentration (Nd), which impacts cloud optical thickness. Changing Nd also modifies the efficiency of drizzle formation, which can alter the cloud macrophysical properties. Cloud responses to aerosol-induced drizzle suppression are complex and sensitive to both meteorological and cloud conditions, but are a critical contributor to intermodel spread in aerosol indirect forcing. Besides being susceptible to aerosols, drizzle is also the dominant removal mechanism for CCN, adding considerable complexity to the picture. Marine low clouds also respond to absorbing aerosols in numerous ways that are poorly understood but to first order depend on the relative aerosol–cloud vertical structure.

The response of clouds to aerosol variations in the current climate (constrained using present-day observations) may not accurately represent the responses of clouds and their radiative forcing to increases in aerosol concentration from anthropogenic emissions since the preindustrial era (e.g., Penner et al. 2011; Ghan et al. 2016). Quantification of aerosol indirect effects therefore necessitates improved understanding of aerosol and cloud properties under pristine conditions.

Models display a wide range of cloud responses to changing CCN concentration. Reasons for this include the application of a lower bound for Nd in some models (Hoose et al. 2009) and very different sensitivities of cloud condensate to aerosols because of a wide spread in the susceptibility of warm rain to Nd (Wang et al. 2012; Ghan et al. 2016). The representation of aerosol-cloud interactions in large-scale models needs to be better constrained using comprehensive measurements, especially in regions where models exhibit the largest diversities.

Remote marine low cloud systems are particularly susceptible to perturbations in aerosols associated with anthropogenic emissions because of their relatively low optical thicknesses and low background aerosol concentrations. A range of processes drive the CCN population, including generation of sea spray aerosol, entrainment of free tropospheric aerosol, and removal of aerosol particles by drizzle. Under certain conditions, nucleation in the boundary layer may also be a significant source of small aerosols that can grow to become CCN. Currently, a quantitative understanding is lacking for some of these key processes. As aerosol-coupled large-eddy simulations (LESs) develop quantitative credibility, these can be used together with aircraft studies to constrain and understand the key processes controlling the CCN budget.

Advances in scientific understanding of aerosol and cloud processes and their representations in models will require comprehensive measurements both at long-term sites and in aircraft-based studies. Datasets gathered from recent field studies in marine environments address some of these observational needs well. However, measurements of aerosol composition and its variation with particle size are scarce. Such measurements are nevertheless necessary to advance a quantitative process level understanding and characterization of marine boundary layer aerosol sources. Vertical and horizontal variations of trace gases, aerosol, and cloud fields from aircraft-based studies are needed to examine the key processes, constrain model simulations, and provide validation of surface-based remote sensing estimates.

Radar observations have played a critical role in demonstrating that marine low clouds precipitate frequently with rates that are significant for the planetary boundary layer (PBL) moisture budget. A considerable fraction of precipitation falling from low clouds evaporates before reaching the surface (Comstock et al. 2004; Wood 2005), making the quantification of precipitation in such clouds sensitive to the distance below cloud base. Evaporation is important for determining the impacts upon PBL moisture and energy budgets and for cold pool formation. Combining radar and lidar observations can more accurately constrain the size distribution of precipitation below cloud and should be used more widely.

A long-standing problem in understanding the formation of warm rain in marine low clouds is the initiation of drizzle. Condensational growth slows as droplet size increases, but the collision efficiency for small drops is low, leading to a significant barrier to the formation of precipitation. Understanding the rate of formation of a relatively small number of “lucky” precipitation droplets requires an understanding of the physics driving the tail of the droplet distribution, which is challenging to measure and predict theoretically. Supersaturation fluctuations, giant CCN, and spectra broadening due to entrainment and mixing have all been proposed as ways to bridge the drizzle barrier. New observational approaches are emerging that can quantify giant CCN and measure the cloud droplet size distribution at the relevant scales for understanding microscale turbulent fluctuations and the impacts of entrainment and mixing. Using Doppler radar information to probe drizzle initiation in combination with process models can provide much-needed information for understanding drizzle initiation.

Most climate models represent collision–coalescence processes using bulk representations that may result in an artificially strong sensitivity to aerosol. Observational constraints on these bulk rates can be derived from in situ observations of the drop size distribution, but constraints from Doppler radar in conjunction with passive shortwave and microwave measurements can help constrain the rates of conversion of cloud droplets to drizzle drops and determine the sensitivity of bulk microphysical parameterizations to cloud droplet and aerosol concentration.

Precipitation processes are on the subgrid scale of most current climate models, making the representation of precipitation-related processes and their influence on cloud cover and condensate particularly challenging. Large-domain LES simulations can help bridge the gap between the scales of observed precipitation features (a few kilometers) and the climate model gridbox scale (typically 50 km).

Entrainment, the incorporation of air from a nonturbulent region into turbulent eddies, is a critical determinant of cloud and aerosol properties. Entrainment at stratocumulus cloud tops, penetrative entrainment by overshooting cumulus clouds, and lateral entrainment through the sides of cumuli are all separately parameterized in climate models. The appropriate way to relate entrainment to the vertical and horizontal structure of turbulence in a cloudy boundary layer is still debated. For a given intensity of cloud-layer turbulence, the humidity difference across the inversion, the mean wind shear, and the cloud droplet size all appear to affect entrainment of dry air into stratocumulus clouds in ways that remain controversial. Together, these two issues make “entrainment closure” a major uncertainty in GCM parameterizations.

LES models are a useful tool for studying entrainment and its effects in cloudy boundary layers. Intercomparison studies have shown that even with vertical grid spacings as small as 5 m, LES entrainment rate is still sensitive to the choice of advection scheme and subgrid turbulence parameterization, as well as the vertical and horizontal grid. In addition, assumptions made in the bulk microphysical schemes used in most LESs may be less accurate for the inhomogeneous conditions of the entrainment zone, with consequences for the simulated entrainment rate. To gain more confidence in the representation of cloud-top processes in LESs, there is a need to use ground-, aircraft-, and satellite-based observations to identify relatively stationary boundary layer conditions for model testing and intercomparison.

The estimation of entrainment rate from ground-based remote sensing and aircraft measurements to provide observational constraints for models remains a significant challenge. Individual entrainment events occur on spatial scales that are smaller than the resolution of most remote sensing instruments. Several promising techniques to estimate entrainment rates and the turbulent processes controlling them have been developed using vertically pointing cloud radar observations (Albrecht et al. 2016) and aircraft observations (e.g., Lu et al. 2012). These techniques need to be applied to long-term observations, then compared against each other and model simulations.

The impacts of entrainment and subsequent mixing on the cloud droplet size distribution have important impacts on the cloud dynamics, radiative forcing, and life cycle. These impacts depend on the mixing scenario (homogeneous to inhomogeneous), which is controlled by numerous factors, including the properties of the entrained air, the turbulent kinetic energy dissipation rate, and the cloud particle size distribution. Most GCMs and LESs assume fully homogeneous rather than inhomogeneous mixing despite recent measurements in convective clouds (Beals et al. 2015), indicating that mixing is generally strongly inhomogeneous. An improved understanding of the mixing process, its impact on cloud microphysics, and suitability of modeling approaches will require a combination of targeted aircraft observations, small-scale modeling studies, and advances in remote sensing measurement and retrieval techniques.

Key processes controlling MCC are not well understood. Precipitation seems to enhance cellularity through cold pool generation, but interactions between MCC, precipitation, thermodynamic structure, and atmospheric aerosol are not well quantified. The horizontal scales of MCC present a significant modeling challenge to GCMs, as the dominant scales are comparable to the horizontal resolution in the next generation of climate models.

There is currently no consensus on how to characterize MCC in observations and in models that are able to resolve the relevant scales. Surprisingly little is known about the spatial scale and organization of updrafts in MCC, although marked mesoscale variability in horizontal winds is a key feature. Continuous monitoring of PBL thermal and moisture structure will help connect MCC characteristics to the local atmospheric state. Combining newly available ground-based views (e.g., scanning cloud radars) with aircraft and satellite observations will provide insight into the structure and dynamics of MCC and how it impacts cloudiness transitions.

A close association has been observed between cloud-free areas in open MCC and very low aerosol concentrations. LES studies suggest that the open or closed cellular form of MCC and therefore albedo may be strongly sensitive to perturbations in aerosol. However, LES studies also show that collision–coalescence in open cells is effective at removing aerosol from the PBL. Thus, MCC may regulate its own aerosol environment (Berner et al. 2013) such that the observed correlations between aerosol and MCC type might be less indicative of a sensitivity of MCC type to aerosol than they are of a sensitivity of aerosol to MCC type. Aircraft observations will continue to be important for providing the aerosol and cloud microphysical data needed to quantify the direction of causality in interactions between aerosol and MCC organization.