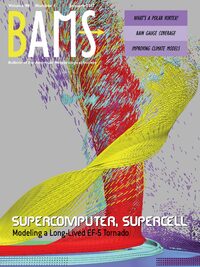 Schematic diagram illustrating how climate observations are converted into musical tones. In this hypothetical example, a histogram is constructed from a set of temperature observations (upper panel) and the extremes of that distribution are assigned to the lower and upper limits of the playable range of the instrument (notes 1 and 3 in the lower panel). Other temperatures are mapped onto tones corresponding to their relative position between the two extremes (for instance, note 2).

Screenshot from the video accompanying the “climate music” composition Planetary Bands, Warming World. In this sonification of NASA’s GISSTEMP data, each instrument in the string quartet represents the average annual zonal temperature within a specific latitude band, including the equatorial zone (cello), the midlatitudes (viola), the high latitudes (second violin), and the Arctic (first violin). As the song progresses, the infographic above each musician displays the average annual temperature for their corresponding region. 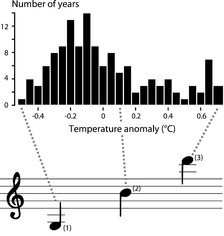 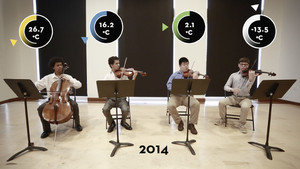