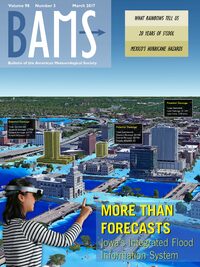 Students helping to erect a mast on Lake Torneträsk.

Students releasing the last radiosonde of the week. 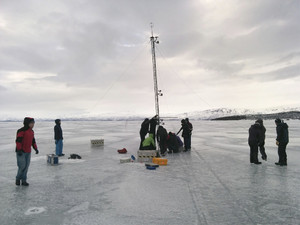 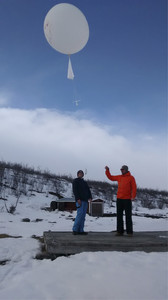 Polar regions are experiencing rapid climate change—faster than elsewhere on Earth—with consequences for the weather and sea ice. This change is opening up new possibilities for businesses such as tourism, shipping, fisheries, and oil and gas extraction, but also bringing new risks to the delicate polar environments. Effective weather and climate prediction is essential to managing these risks; however, our ability to forecast polar environmental conditions over periods from days to decades ahead falls far behind our abilities in the midlatitudes. To meet the growing societal need for young scientists trained in this area, a Polar Prediction School (www.climate-cryosphere.org/wcrp/pcpi/meetings/abisko-pp-2016) for early-career scientists from around the world was held in April 2016.

The school was held at the Abisko Scientific Research Station (http://polar.se/en/abisko-naturvetenskapliga-station/) in northern Sweden—an appropriately Arctic environment. It brought together 29 Ph.D. students and early-career researchers from 16 countries for 9 days of lectures and practical exercises on the theme of polar prediction. It was a joint initiative from the World Weather Research Programme (WWRP)-Polar Prediction Project, the World Climate Research Program (WCRP)-Polar Climate Predictability Initiative, and the Bolin Centre for Climate Research. Here we briefly describe the program, which was unique in combining polar weather and climate theory with modeling exercises and field meteorology techniques. Each of these components forms a crucial pillar of the prediction problem, and the motivation for combining these was to provide participants with a complete overview of the components required to understand and predict polar weather. The model of combining these components into a coherent course is recommended for future schools on weather and climate prediction at all latitudes. The school was well received by the students and formed part of the training program for the upcoming international Year of Polar Prediction (YOPP; 2017–2019).

The quality of polar prediction is limited by a paucity of observations at high latitudes. To introduce students to the challenges of making field observations at high latitudes, they conducted practical exercises based around measurements made from a micrometeorology mast erected on the frozen surface of Lake Torneträsk, close to the research station (Fig. 1). Surface energy budget contributions were calculated from up- and downwelling solar and infrared radiometers and eddy-covariance measurements of the turbulent heat flux. Direct measurements of the wind stress and indirect estimates derived from near-surface profiles of wind speed provided two different approaches to calculating the surface drag coefficient, which was then related to the variations in upwind topography with wind direction.

Radiosondes were released each day (Fig. 2) and the soundings were uploaded to the Global Telecommunication System, to be used in operational forecasts. In addition to the daily soundings, during one day of intensive measurements radiosondes were released every 3 hours for a full 24-hour period to study the diurnal cycle of atmospheric boundary layer structure at the site. All the observations were drawn together on the final day to study the full range of processes governing the surface energy balance over the previous week. This demonstrated the close link between the surface energy budget and albedo as snow cover on the lake ice varied over time.

Lectures and exercises covered chaotic systems and predictability, operational ocean prediction, modeling of polar boundary layer processes, ensemble climate prediction, sea ice processes, and polar lows. Due to the remoteness of the location (limitations in Internet speed), the research station did not have an extensive computer teaching laboratory. To create a uniform environment for teaching, the OpenIFS team at the European Centre for Medium-Range Forecasts (ECMWF), together with Stockholm University, provided a Virtual Machine environment for the students to install on their own laptops. It contained the necessary compilers, analysis, and modeling software for the students to use, and had the added benefit that the students were able to take this platform away with them after the course. By using the Virtual Machine, students were able to investigate topics related to the physical processes observed during the field component, such as running polar boundary layer case studies with the OpenIFS Single Column Model, among other exercises, therefore linking the practical and theoretical aspects of the course.

To make the students aware of the special weather conditions that can arise in polar mountain regions and to provide insight into how today’s forecast models perform in these regions, the students were encouraged to give daily weather briefings. This kind of exercise is an efficient way of giving the students experience of interpreting and using products from both global and regional forecast models. Furthermore, it led to useful discussions about model uncertainties and forecast skill.

This program was unique in the sense that it included an intensive program of lectures and modeling as well as collection and analysis of field observations. The virtual machine platform was used to great effect, resulting in a uniform teaching environment that led to discovery-based learning about polar prediction. During the last part of the course, the students were asked to try to combine their knowledge gained from the modeling sessions with the weather briefings and to use that while analyzing their own field observations. This led to more advanced knowledge of some specific events, and motivation to combine several tools and resources in the future. However, because the prediction problem is highly multidisciplinary, it is difficult to determine which topics to include and where to draw the line. We found it important not to dilute the course by covering too wide a range of topics. Therefore, certain areas that are important for polar prediction, such as data assimilation, satellite observations, and snow processes, were omitted from the curriculum. Overall, the students responded well to a fairly diverse curriculum [see a Storify by Denis Sergev (UEA) of tweets from participants at https://storify.com/meteodenny/pps2016], and we recommend this model for future schools for early-career scientists.