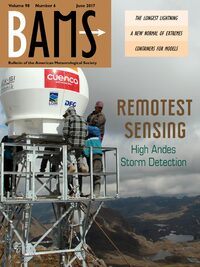 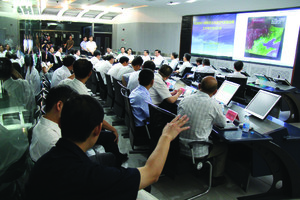 What: More than 500 scientists, engineers, and students met to study the Earth’s internal structure, composition, and tectonics and all aspects of the oceans, the atmosphere, ionosphere, magnetosphere, and solar–terrestrial relations.

The Chinese National Committee for International Union of Geodesy and Geophysics (CNC-IUGG) is a nongovernmental scientific organization established by the Chinese Academy of Sciences (CAS) and China Association for Science and Technology (CAST) in 1979. CNC-IUGG is dedicated to the development of Chinese geosciences. Since 2014, CNC-IUGG has held the Congress of China Geodesy and Geophysics (CCGG) every two years to exchange multidisciplinary research, promote the development of IUGG, bring knowledge to society, and link research to global sustainable development. The theme of the Second Congress was “Earth Environment and Orderly Development.” This congress featured a series of invited talks from leading scientists in the plenary session and a number of shorter contributed talks and poster presentations by other attendees in the union sessions.

The Second CCGG was hosted by Nanjing University of Information Science and Technology (NUIST) and the Chinese Meteorological Society (CMS). Orderly development of the Earth—its shape; its gravitational and magnetic fields; the dynamics of the Earth as a whole and of its component parts; the Earth’s internal structure, composition, and tectonics; the generation of magmas, volcanism, and rock formation; the hydrological cycle, including snow and ice; all aspects of the oceans, the atmosphere, ionosphere, magnetosphere, and solar–terrestrial relations; and analogous problems associated with the moon and other planets—is inherently interdisciplinary, and it needs to integrate the knowledge of oceanography, climatology, synoptic meteorology, environmental science, and geophysics to solve its problems. CMS, one of the first national natural science societies of China, is devoted to promoting the development of national meteorological services and the establishment of modern meteorological science. As one of the world’s largest meteorological universities, NUIST has established a harmonious discipline system of atmospheric science, marine science, information science, environmental science, management, and basic science.

During the 3-day agenda, in addition to the general assembly special report, a total of 593 scholars from home and abroad made oral presentations at the meeting. The themes of this meeting related to meteorology and climatology mainly concentrated in polar cryosphere–hydrosphere–atmosphere and its impacts, regional ocean modeling, data assimilation, forecasting and applications, processes of monsoon variations and risk assessments of disaster weather, haze weather and air pollution, climate models, and climate modeling. Other topics were about the ionospheric space weather and ionosphere–magnetosphere coupling, continental volcanism and geodynamics, land cover on the plateau, and sustainable development.

POLAR CRYOSPHERE–HYDROSPHERE–ATMOSPHERE AND ITS IMPACTS.

Polar regions, characterized by a surface of snow and ice, are changing rapidly. Changes in ice sheets, sea ice, snow cover, and frozen ground have large-scale influences on Earth’s climate (Avila et al. 2012). The abundance of influences from polar regions is largely the result of interaction within the polar cryosphere–atmosphere–hydrosphere. This session focused on the following points: 1) sea ice change of polar regions, mechanisms, and influences; 2) interactions of ice sheets with the atmosphere and ocean and their impacts on sea level changes; 3) polar snow cover, frozen ground changes, and their impacts; 4) polar snow/ice–atmosphere–ocean interactions and mechanisms; 5) long-term record of climate and environment from polar regions; 6) polar–midlatitudinal teleconnections and major impacts; and 7) polar changes and their impacts to the economy and cultures. The joint session processed interdisciplinary studies on the changes taking place and impacts realized as the climate, cryosphere, ecosystem and water cycle interact (J. X. Lv and Y. B. Yuan 2016, personal communication).

For the past 10 years or so, regional meteorological forecasting systems were developed for various regions around the world. These systems tend to be high resolution (kilometer level), data assimilative, and tidal permitting, and they provide a web interface for user applications (Rothfusz et al. 2014). Various applications supporting scientific field experiments and search and rescue operations were also developed for these systems. The fast development in this field is related to the progress in observational instrumentation, computing power, data assimilation, methodology, and other aspects. This session of CCGG intended to invoke discussions of the experts in the above fields and to bridge the gap between societal needs and products from regional ocean forecasting systems. Other presentations highlighted the dynamical processes in the South China Sea and impacts on regional climate and the environment (D. X. Wang and X. H. Zhu 2016, personal communication).

PROCESSES OF MONSOON VARIATIONS AND RISK ASSESSMENT OF DISASTER WEATHER.

As is well known, Asia is the most striking monsoonal region in the world. The monsoons vary on a wide range of time scales and induce very complicated variations in weather and climate there, and hence result in frequent occurrences of severe meteorological disasters (IPCC 2013). The Asian monsoon circulation variations are modulated by both internal dynamic processes and external forcing, such as large-scale topography and land–sea thermal contrasts. The Asian monsoons are not only interactions with the oceans, land surface processes, ecosystems, and human activities inside the Asian monsoon region but also interactions with factors outside the monsoon region such as the ocean–atmosphere system and circulations in the mid- and high latitudes in both the Northern and Southern Hemispheres.

The disasterous weather, including severe convection, heavy rainfall, typhoons, snow, and so on, frequently occurred in China. However, the occurrence and development mechanisms of disasterous weather systems are still unclear and need to be studied in depth (I. Z. Alik 2016, personal communication). This section had more than 100 presentations, with most topics focused on the advances in studies of the variational Asian monsoon processes, the dynamic processes, data assimilation, and related prediction theory of disaster weather systems in China. Other presentations within this theme discussed the physical land–atmosphere processes over the Tibetan Plateau and their impacts on weather and climate (X. D. Xu 2016, personal communication).

Since the early twentieth century, Earth’s mean surface temperature has risen rapidly about 0.8°C, with about two-thirds of the increase occurring since 1980 (IPCC 2013). Global warming is affecting many parts of the world, including sea level rise, changes in the amount and patterns of precipitation, more frequent extreme weather events, and so on (Yang et al. 2002). Climate models are useful tools for understanding climate variability and predicting and projecting future climate change. This session focused on development of the climate/Earth system model and component models. Several presentations discussed the development and improvement of the atmospheric general circulation model and ocean general circulation model, the land surface model, sea ice model, atmospheric chemistry model, aerosol module, terrestrial carbon cycle model, regional climate model, development and application of couplers, and the modeling of global climate. They highlighted climatic variations in recent years among those working in different disciplines and made reliable climate predictions (C. B. Fu and X. L. Zhou 2016, personal communication).

The Third CNC-IUGG symposium will be held in September 2017 in Beijing. The meeting was important in promoting the development of CNC-IUGG and combining with the International Council for Science (ICSU), which launched Future Earth, a platform to accelerate transformations to a sustainable world. It focused on the characteristics of cross-disciplinary development and also provided a platform for Chinese Earth scientists to communicate, exchange, and cooperate in related fields. In the future, it will work on strengthening our exchanges and cooperation with relevant international scientific organizations and expanding the international influence of China’s geoscience research.