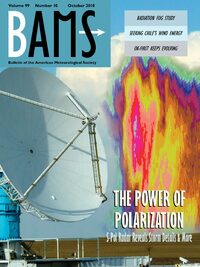 Scott’s daily mean temperatures as given by Fogt et al. (2017) for the Beardmore Glacier through the Barrier stages of the Scott party’s return journey. The linear fit slope (blue line) is –1.0.

Historical near-surface minimum daily temperatures (or the lowest) reported by Lt. Bowers and Captain Scott. Temperature readings after 10 Mar are not minimum near-surface temperatures. Additionally, for the following days, as reported by Captain Scott, the temperatures are the lowest reported up until that day: 15–25 Feb, excluding 16, 17, and 20 Feb; 3 and 7 Mar; and 21–27 Mar. The “super extreme cold snap” temperature of –70°F indicated by the red triangle cannot be placed (drawn) within this figure scale. [Plot adapted from Sienicki (2016).] 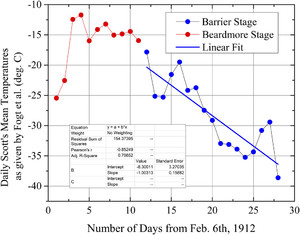 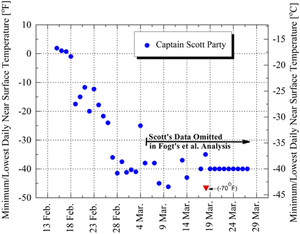