The daily values of skew, kurtosis (plotted as differences from 3), and maximum and minimum lag-1–9 autocorrelations based on the 1979–2016 bilinearly interpolated along-track ERA-Interim daily mean temperature data for the (a) Amundsen and (b) Scott polar parties. (c) Differences (°C) in the daily means during 2001–15 of observed temperatures at Amundsen–Scott South Pole station calculated using four-times-daily synoptic reports at 0000, 0600, 1200, and 1800 UTC and based on the average of 24 hourly observations per day. 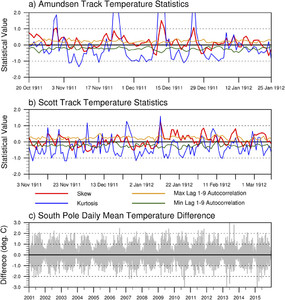 One of the primary concerns raised by the comments of Sienicki (2018) is the assumption made about the underlying nature of the data we presented in our original paper (Fogt et al. 2017). To address these concerns, Fig. 1 of this reply displays several statistical values calculated over the range of the 36 years of daily mean data from the European Centre for Medium-Range Weather Forecasts (ECMWF) interim reanalysis (ERA-Interim) that were used along the tracks of the Amundsen (Fig. 1a) and Scott (Fig. 1b) polar parties. To demonstrate that the data are approximately normally distributed, Figs. 1a and 1b display the skew and kurtosis (shown as differences from 3, the kurtosis of a normal distribution) of 36 daily values along the tracks of each polar party. Although the exact distributions of skew and kurtosis are challenging to determine with limited data, the assumption of normality is typically rejected for large absolute values of both skew and kurtosis. For the Amundsen data, assumptions of normality of the daily mean temperature data are clearly violated a few times along their journey, corresponding to high positive skew and kurtosis values in Fig. 1a. These deviations from normality can be clearly seen in Fig. 4a of Fogt et al. (2017) when the maximum temperature anomaly was well above the +2 standard deviation range, indicating a strong positive skew to the underlying data. For the Scott along-track temperature data, the assumption of normality appears valid nearly throughout, with an exception in mid-January displaying both high positive skew and kurtosis. Thus, the response in Fig. 1 is consistent with the data in Fig. 5 of Fogt et al. (2017), and the statement in the paper that the data are “approximately normally distributed” [italics added] is valid [i.e., the skew (0.3365) and kurtosis (–0.3013) for the data in Fig. 5 are relatively small, indicating that the data depicted in Fig. 5 are in fact approximately normally distributed]. The bin size in Fig. 5 makes the data visually appear more positively skewed than they are statistically; sensitivity to the bin size and window lengths were extensively evaluated in the supplemental material (Fig. ES10) of our published paper. Our paper’s focus on exceptional conditions during December 1911 for both polar parties and the change in conditions from early to late February 1912 for Scott indeed highlights periods when the data are approximately normally distributed in Figs. 1a and 1b. Furthermore, our conclusions of exceptional conditions were also linked to record values compared to the 36 years of ERA-Interim values, which would hold true irrespective of the underlying distribution of the data. To determine separately if the data are independently distributed, we plot the maximum and minimum values of the lag-1–9 autocorrelation from the full distribution of the 36 years of ERA-Interim daily mean temperatures along the tracks in Figs. 1a and 1b at each day; throughout the entire tracks these extreme values of autocorrelations remain close to zero, confirming that the daily mean temperature anomaly along the track is independent of the temperature at that same location in any other year during 1979–2016. Therefore, for nearly every day on the track of both polar parties, the data are independent and identically distributed.

Another concern raised by Sienicki (2018) is that the averaging of sparse measurements to calculate the daily mean (often only three measurements or less a day) does not compare to the true daily mean value averaged using the full range of data. Although this is unavoidable given the available well-exposed sling thermometer data collected during the expeditions, we evaluate the consistent averaging used for the reanalysis data in Fig. 1c to approximate this approach. This figure shows the difference between daily mean observed temperatures at South Pole station from 2001 to 2015 computed using only the four-times-daily synoptic reports (0000, 0600, 1200, and 1800 UTC) and the full 24 hourly observations. At South Pole station, the differences in the daily means calculated using the two approaches rarely differ by more than 2°C, and during the summer, the focus of the analysis in Fogt et al. (2017), the difference rarely exceeds 1°C. This comparison would suggest that averaging three values per day along the plateau routes of both polar parties would adequately approximate the true daily mean. Given that our main conclusions of the exceptional conditions are frequently based on anomalies in excess of 5°C (and on the plateau for Amundsen, or near the plateau for Scott), this comparison suggests that these daily mean temperatures would still emerge as exceptional given the small sensitivity to calculating the daily mean temperature at South Pole station in Fig. 1c.

In addition, five of the concerns raised by Sienicki (2018) mischaracterize the focus and content of our work or its conclusions. First, our analysis focuses on the conditions during the entire summer of 1911/12 experienced by both parties, and we note at the end of the introduction that our paper is not focused on the later outcomes of each polar party. As stated in the conclusions, our central theme is the particularly exceptional conditions in December 1911, not the central theme of “Antarctic weather as the main cause of Scott’s and his fellow explorers’ deaths,” as asserted in Sienicki’s (2018, p. 2142) comments. Second, Sienicki questions the accuracy of the reanalysis data given its resolution as compared to local measurements, overlooking the fact that we specifically examined the limitations of ERA-Interim and evaluated potential limitations by comparing our results as appropriate to other sources of data. These included the measurements at the base camps during the expeditions, as well as continuous measurements at McMurdo, the Amundsen–Scott South Pole station, and the Henry automatic weather station on the Antarctic Plateau. We also evaluate the climatology of ERA-Interim in the supplemental material (Fig. ES2), and note in our paper and the supplemental material that along the Ross Ice Shelf the reanalysis captures many regional signatures depicted in the array of available automatic weather stations despite its resolution; although local variability may at times be incompletely captured, the important effect of topography is evident in Figs. ES2 and ES3. Third, contrary to the claim by Sienicki, the use of bilinearly interpolated ERA-Interim data in our work ensures, due to the convergence of meridians at the South Pole, that the spatial resolution between longitude grid points is closer than 15 geographical miles (1 geographical mile ≈ 1.885 km) during the primary period of interest for both parties. Fourth, to ensure consistent data throughout the period of interest, since we are focusing on an unusual shift in the observations, our paper uses only the well-exposed sling thermometer data. These data end when the Scott logbook indicates that their sling thermometer was broken. We clearly state our rationale for this choice, and the paper covers the summer temperatures [December–February (DJF)] as well as the transition to colder temperatures in the first few days of March. We are not covering the ensuing days at all, so the discussion of that topic is inappropriate here. Whether one of the authors has presented other publications elsewhere that focus on later times in the season using other instruments is not germane to Fogt et al. (2017). The publication of the present paper should not be used as a springboard for debate on other material and issues not presented here, as Sienicki’s comments attempt to do. In fact, most of the analysis for the data along the Scott track analyzed in our paper end on 5 March 1912, since the only day after this to have at least three sling-thermometer observations taken was 8 March 1912; 5 March therefore marks the end of the continuous three-times-daily measurements taken by the Scott polar party. As such, our work supports earlier research efforts (Solomon and Stearns 1999; Solomon 2001) by noting that the conditions in early March 1912 were much colder than average, as we claim in our paper. Fifth, the claim that this single drop in temperatures in early March 1912 was due to global El Niño and the southern annular mode (SAM) is another mischaracterization of our conclusions, which were that conditions during early December 1911 and the warm conditions in early February 1912 were consistent with the typical climate impacts during El Niño and negative SAM index years [we (Fogt et al. 2017, p. 2198) specifically state "the summer of 1911/12 was marked by one of the strongest negative SAM years since 1850)" and "the summer of 1911/12 was also marked with El Niño conditions"; note that italics are added for emphasis].

Finally, we note that in analyzing this temperature change experienced by Scott and his companions, we do not make an assumption or hypothesis that past streaks influence the likelihood of future streaks, as asserted by Sienicki, but rather examine the difference in two means (early February vs late February 1912) compared to the distribution of the difference of these means from the ERA-Interim dataset, again based on 36 years of data for each mean. As stated previously, the sensitivity of the exact timing of the means was explored in our supporting information (Fig. ES10), and all distributions as well as the further analysis presented in this reply indicate that this difference in the two means was rare (probability p < 0.05), justifying our conclusion that the conditions during the South Pole race were indeed exceptional.