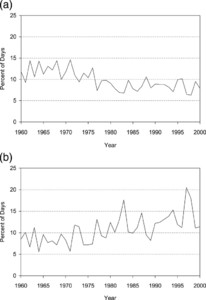 Vincent et al. (2005) employed the nonparametric linear regression method of Sen (1968) to estimate statistically significant linear regional trends (α = 5%) in several indices of daily temperature extremes over the period 1960–2000 for eight southern countries of South America. While the authors found no statistically significant linear trends in the percentage of cold days and warm days, they reported a statistically significant 5.5% decrease and 5.6% increase in the percentage of cold nights and warm nights, respectively. They concluded that the regional warming over the continent was therefore driven by nighttime warming and noted that this finding generally agreed with what has been observed in many other parts of the world.

We critically examined these findings because of the apparent failure by the authors to properly assess the data for the presence of changepoints and monotonic trends prior to the application of the Sen method for estimating linear slopes. The Sen method, as the authors correctly pointed out, is based on Kendall’s rank correlation, but as McCuen (2003) advised, is designed to detect a monotonically increasing or decreasing trend in a data series rather than an abrupt change.

It is of course well known that a statistically significant result in a linear regression analysis does not necessarily imply that the linear regression model is valid. For example, Wilks (1995) cautioned against this common statistical pitfall and advised as follows: “It is not sufficient to blindly feed data to a computer regression package and uncritically accept the results. Some of the results can be misleading if the assumptions underlying the computations are not satisfied.”

The objective of this study therefore was to assess the validity of the reported observed statistically significant linear trends in cold and warm nights in southern South America for the period 1960–2000.

In our examination of the aforementioned findings, we followed a simple two-step approach. In the first step, time series plots of the data were visually inspected to identify apparent significant patterns in the data. In the second step, the Pettitt test (Pettitt 1979; WMO 2003) was utilized to identify possible changepoints in the two data series. The null hypothesis is that the series is independent and identically distributed (random) while the alternative hypothesis is that a stepwise shift in the median (a break or changepoint) is present. We also employed the nonparametric linear regression method of Sen (1968) to further confirm the presence or absence of any apparent patterns identified in the visual inspection of the time series plot. The Sen method provides a point estimate of the slope of a linear trend and its corresponding confidence interval.

For the percentage of cold nights, the Pettitt test identified the year 1976 as the statistically significant changepoint (α = 1%). The Sen slope and corresponding 95% confidence interval for the subseries before the shift (1960–76) were found to be −0.03 and (−0.28, 0.17), respectively. The corresponding values of slope and confidence interval for the subseries after the shift (1977–2000) were −0.01 and (−0.10, 0.09), respectively. The fact that the 95% confidence intervals of both slopes contain zero indicates that the slopes are not significantly different from zero and thus not statistically significant suggesting the absence of any monotonic increasing or decreasing trend.

The medians of the subseries before and after the shift were found to be 11.8% and 8.3%, respectively, signifying an abrupt decrease of 3.5% in contrast to the reported gradual linear decrease of 5.5% over the 41-yr period. The conclusion that there was a significant decreasing trend of 5.5% in the percentage of cold nights is therefore inaccurate and misleading.

For the percentage of warm nights, the Pettitt test identified the year 1979 as the statistically significant changepoint (α = 1%). The Sen slope and corresponding 95% confidence interval for the subseries before the shift (1960–79) were found to be 0.04 and (−0.13, 0.23), respectively. The corresponding values of slope and confidence interval for the subseries after the shift (1980–2000) were 0.09 and (−0.11, 0.34), respectively. The fact that the 95% confidence intervals of both slopes contain zero indicates that the slopes are not significantly different from zero and thus not statistically significant suggesting the absence of any monotonic increasing or decreasing trend.

The medians of the subseries before and after the shift were found to be 8.4% and 12.2%, respectively, signifying an abrupt increase of 3.8% in contrast to the reported gradual linear increase of 5.6% over the 41-yr period. The conclusion that there was a significant increasing trend of 5.6% in the percentage of warm nights is therefore inaccurate and misleading.

Our detection of significant changepoints in the two regional series raises an interesting question. How was it possible for the two regional series to be contaminated with inhomogeneities in spite of the homogeneity testing performed by the authors on the data series at individual stations? One possible answer to this question may be related to the homogeneity testing procedure employed, namely, the two-phase regression (TPR) model with common trend (Wang 2003).

In a computer simulation study, Reeves et al. (2007) compared the performances of several commonly used changepoint detection techniques and found that the TPR model outperformed its competitors when there was a similar trend component before and after the potential changepoint. However, in flat step-change situations where the slopes before and after the potential changepoint were not significantly different from zero, the TPR model was found to perform poorly in comparison with its competitors. This suggests that in flat step-change situations, the type II error rate of the TPR model increases causing it to lose power thereby making it less efficient and more likely to fail to reject a false null hypothesis. The result is that genuine cases of inhomogeneities at “suspicious sites” deliberately included by the authors to avoid having “far fewer stations for the analyses of trends in South America” may have escaped detection by the TPR model thereby contaminating the regional series.

To investigate this possibility, we applied the Pettitt test to the annual series of cold and warm nights for the individual stations used to create the regional time series. Table 1 shows the changepoints detected, their levels of statistical significance, and the corresponding stations. It is interesting to note that the vast majority of changepoints occurred from the mid- to late 1970s, which seems to suggest a common causal factor. One plausible explanation for these sudden changes could be the well-known abrupt climate regime shift of 1976/77 (Miller et al. 1994; Agosta and Compagnucci 2008) associated with a phase shift in the Pacific decadal oscillation.

Changepoints in the annual series of cold nights and warm nights at individual stations with their corresponding levels of statistical significance. 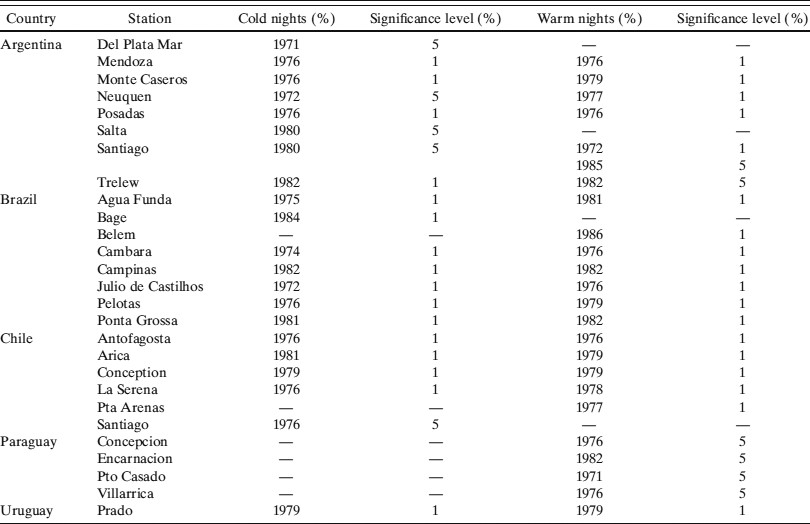 There may, however, be other factors at play since no statistically significant changepoints or trends were detected at many stations. There were also anomalies at two stations worth mentioning. First, in 1982, the Trelew station experienced a sudden increase and decrease in cold nights and warm nights, respectively, resulting in cooling at that location. Second, the Santiago (Argentina) station experienced a sudden decrease in warm nights in 1972 followed by a sudden increase in 1985 indicating cooling and subsequent warming at that location.

It is now quite clear that our homogeneity testing results for individual stations corroborate our earlier results, which had revealed the presence of abrupt step changes in the two regional data series around the middle to late 1970s and consequently invalidate the claim of a significant increasing linear trend in nighttime warming.

Kundzewicz and Robson (2000) offered the following cautionary words about this common statistical misuse of trend analysis, where test results can be significant for the “wrong” reason: “Even if a test result is significant it does not prove that the hypothesized change has taken place. For example, if there has been a marked step change in a data series then it is likely that a test for trend will give significant results—even though there is no trend.”

The effect of the presence of abrupt step changes on the results of trend analysis was also highlighted by Hartmann and Wendler (2005), who deftly demonstrated how the 1976 Pacific climate shift biased the results of linear trend analysis in such a way that temperature trends before and after the shift differed substantially (even in sign) from the trend of the full time period.

In summary, we critically examined the Vincent et al. (2005) study and identified flaws in two fundamental areas, namely, homogeneity testing and trend analysis. We conclude that these flaws invalidate the reported findings of statistically significant decreasing and increasing linear trends in the percentage of cold nights and warm nights, respectively, in southern South America during the period 1960–2000. Thus, the putative significant increasing linear trend in regional nighttime warming was not real and is more likely an artifact of the well-known 1976/77 Pacific climate shift coupled with the inappropriate use of linear regression for trend detection.