Ten simulated paths (in black) and the original series (in blue).

Simulated rank distributions in ascending order for the years 1997–2008, assuming normality and independence between years and using 100 000 simulated paths. The right-hand number in each figure panel heading is the estimated probability of that year being the warmest among the 112 years (1897–2008) considered.

Ten simulated dependent paths (in black) and the original series (in blue).

As in Fig. 3, but for dependent data. 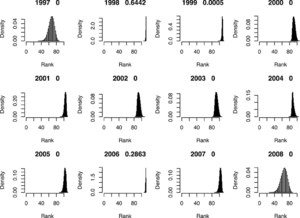 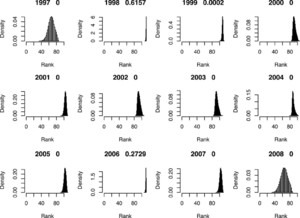 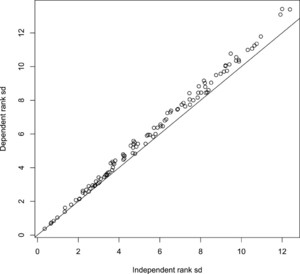 Uncertainty in Ranking the Hottest Years of U.S. Surface Temperatures

A popular indicator of global warming is the ranking of recent years among the historical record. This can be done for individual stations, for countries, for continents, or globally. For example, the recent paper by Shen et al. (2012) produced lists of the 10 hottest and 10 coldest years for the contiguous United States. This ranking was based on their statistical estimate of U.S. temperature anomalies using the U.S. Historical Climatology Network dataset, version 2 (Menne et al. 2009), corrected for time of observation differences. In this note we will use the same data, focusing only on the annual Tmean.

The ranking in Shen et al. (2012) was based on their statistical estimate of U.S. temperature. However, the ranking of years must take into account the fact that U.S. land temperature is a statistical estimate, not a direct measurement, and as such has a standard error, with components from measurement error at individual stations, spatial dependence, orographic effects, etc. The paper by Shen et al. is mainly concerned with the statistical estimation of this standard error. The data used by Shen et al. are not the same as those used by the National Oceanic and Atmospheric Administration (NOAA) to estimate U.S. contiguous states' average temperature, as the latter have been subject to data homogenization while the former have not.

How does the uncertainty in the statistical estimate of U.S. annual-average land temperature affect rankings? For example, from Fig. 1 (adapted from Fig. 6 in Shen et al. 2012), we see that the year 1921 (green horizontal line), ranked fourth in their Table 4, may actually have been the hottest year on record, because the higher green horizontal dashed line, corresponding to the upper end of a 95% confidence interval for the actual average yearly U.S. temperature for 1921, crosses the intervals for all three years that are ranked hotter than 1921. On the other hand, the same year can be ranked as low as fourteenth, because the lower green horizontal dashed line (the lower end of the confidence interval) crosses or falls below 13 of the confidence intervals. Now, these intervals are not simultaneous (i.e., the joint confidence level of all the intervals taken together is less than 95%). Thus, a more precise assessment of the uncertainty in rankings is needed. That is the purpose of this note.

In section 2, we describe a simple approach to simulating the distribution of ranks for each year from an ensemble of time series with the same mean and variance as the Shen et al. (2012) series. The spread of this rank distribution describes the uncertainty in the rank for that year. The method in section 2 does not take into account the temporal dependence of the time series of land temperature averages, and section 3 describes how a more realistic simulation is done. We close the paper with a discussion in section 4.

2. Simulating the distribution of ranks

If the U.S. temperatures at different years can be treated as independent, it is fairly easy to simulate a temperature series with the same stochastic structure (i.e., mean and standard deviation) as the observations. Because the averaging is over a fairly large number of stations, many of which are only weakly spatially dependent, a normal assumption for the yearly estimates is reasonable, using a central limit theorem such as that of Pinkse et al. (2007). Thus, for each year [using the function rnorm in the statistical software R (R Development Core Team 2012); the code used for all calculations in the paper and the complete versions of Figs. 3 and 5 (described in greater detail below) are freely available at http://www.statmos.washington.edu/wp/?p=696] we simply draw a sequence of random normal numbers with mean equal to the yearly U.S. average temperature and a standard deviation equal to its standard error. Figure 2 shows 10 such simulated paths together with the original time series (in blue) from Fig. 1.

We then calculate the rank of each year in the simulated series (using the R function rank). Repeating a large number of times (100 000 in order to be near certain of the accuracy of two decimal places in proportions), we obtain a distribution of ranks for each year. Figure 3 shows the rank distribution for the years 1997–2008. The number in the header is the simulated probability that the given year is the warmest in the record from 1897 to 2008.

The simulation in section 2 assumed that different years are independent, and that the nonstationarity in the data only results from the mean and variance changing with time. However, because of large-scale circulation patterns and atmosphere–ocean interactions, we would expect successive years to be dependent random variables.

To estimate the dependence pattern, we first remove a linear trend using ordinary least squares. Studying the dependence structure of the residuals from this trend using the autocorrelation structure and the Akaike information criterion (AIC; R function auto.arima) suggests an autoregressive-moving-average (ARMA) model of orders 3 and 1, respectively. We fit this model using generalized least squares (so that we take proper account of the dependence as well as the varying variance; R function gls). The normalized residuals from this fit are uncorrelated [as checked by spectral analysis, autocorrelation function, time series order estimation using AIC, and a white noise test by Lobato and Velasco (2004) that yields a p value of 0.977] and Gaussian (as tested by a Q–Q plot with simultaneous confidence band). Using the Bayesian information criterion (BIC) instead of AIC to determine time series order is often recommended because of the tendency of BIC to select more parsimonious models. Indeed, in this case BIC selects a moving-average model of order 1, but there is considerable time series structure left in the residuals, as judged by the spectrum, autocorrelation function, and white noise test. We therefore will use the AIC-selected model.

We create new time series innovations by permuting the normalized residuals. Using the estimated time series model and the permuted innovations, we then compute a new path using the R function arima.sim. We multiply this path with the standard errors and add back the U.S. yearly mean. This method is essentially the time series bootstrapping method given in Efron and Tibshirani (1993, section 8.5), with the slight modification that we are using a permutation bootstrap (instead of resampling from the residuals). The difference from the method in section 2 is that we use dependent random variables that closely mimic the estimated dependence structure in the original time series instead of the independent normal random variables used in section 2. Similarly to Fig. 2, Fig. 4 shows 10 simulated paths in black with the original monthly series in blue.

The description of uncertainty in ranks using a simulated rank distribution allows easy calculation of derived quantities, such as the probability that each of the years 1897–2008 are among the 10 warmest. Because we have 100 000 rankings for each year, we just need to count the proportion of these ranks that are in the top 10 (i.e., ranked 103 or higher). Table 1 gives the results (we only present those years whose probability of being in the top 10 is at least 0.1), and a comparison with the ranking in Shen et al. (2012). Our list has four years that are not ranked top 10 by Shen et al.; all of their ranked years have top 10 probabilities of more than 0.5. The year 2007 (not ranked by Shen et al.) comes out with the same probability of being in the top 10 as the year 2005 (ranked 10). The temperature anomalies for 2005 and 2007 differ by 1.5 × 10−4 °C. Ranking the years using the average ensemble rank yields the same top 10 years as in Shen et al. (2012) for the independent ensemble, while in the dependent ensemble year 2007 replaces year 2005.

Probability of a given year being among the 10 warmest on record. 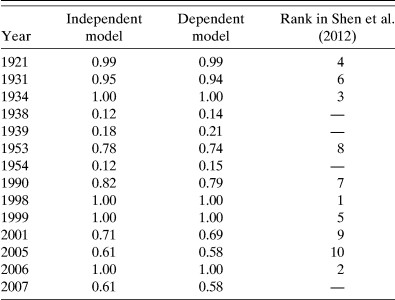 The Intergovernmental Panel on Climate Change fourth assessment synthesis report (Pachauri and Reisinger 2007) said that “[e]leven of the last twelve years (1995–2006) rank among the twelve warmest years in the instrumental record of global surface temperature (since 1850).” Using the Hadley Centre/Climatic Research Unit, version 4 (HadCRUT4), global temperature data (Jones et al. 2012), based on both land and marine observations, we can assess the uncertainty in the statement that the years 1995–2006 have 11 years in the top 12 since 1850 (this statement is true for the HadCRUT4 global series). Applying our method, again using independent simulations and the standard errors given by the Hadley Centre, we see that 11 years have a probability of 0.54. The probability that 10 years are in the top 12 is similar (0.42) and 9 years have a probability of 0.03, while the remaining probability is split between 8 or 12 years.

Since the original submission of this paper, the contiguous U.S. annual-mean temperature series has been updated through 2012, with the last year being the hottest on record. While we do not have standard error calculations for the NOAA series used in this ranking, we estimate them by extrapolating those of Shen et al. (2012) and transform the NOAA values to the scale used by Shen et al. The 2012 annual-mean temperature is apparently seven standard errors larger than the previously largest value (1998). This is highly unlikely under a stationary climate, and all 100 000 paths in our ensemble come out showing 2012 as the hottest year.