As in Fig. 3, but for correlations between seasonal mean daytime boundary layer height and surface temperature. 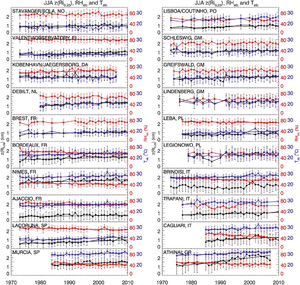 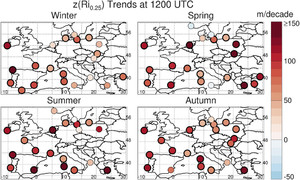 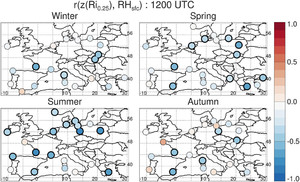 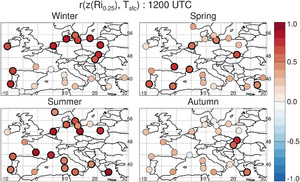 Estimates of trends in planetary boundary layer height over Europe are presented, based on daily radiosonde observations at 25 stations during 1973–2010 and using a bulk Richardson number approach to determine heights. Most stations show statistically significant increases in daytime heights in all four seasons, but fewer show statistically significant trends in nighttime heights. Daytime height variations show an expected strong negative correlation with surface relative humidity and strong positive correlation with surface temperature at most stations studied, on both year-to-year and day-to-day time scales. Similar relations hold for long-term trends: increasing daytime boundary layer height is associated with decreasing surface relative humidity and increasing surface temperature at most stations. The extent to which these changes are regionally representative or local reflections of environmental changes near the observing stations is difficult to ascertain.

Estimates of trends in planetary boundary layer height over Europe are presented, based on daily radiosonde observations at 25 stations during 1973–2010 and using a bulk Richardson number approach to determine heights. Most stations show statistically significant increases in daytime heights in all four seasons, but fewer show statistically significant trends in nighttime heights. Daytime height variations show an expected strong negative correlation with surface relative humidity and strong positive correlation with surface temperature at most stations studied, on both year-to-year and day-to-day time scales. Similar relations hold for long-term trends: increasing daytime boundary layer height is associated with decreasing surface relative humidity and increasing surface temperature at most stations. The extent to which these changes are regionally representative or local reflections of environmental changes near the observing stations is difficult to ascertain.

The planetary boundary layer (PBL) is the bottom layer of the troposphere in contact with the surface of the earth. As a critical component of the earth's climate system, the PBL controls exchanges of heat, momentum, moisture, and chemical constituents between the surface and free atmosphere. The structure of the PBL can be complex, influenced by local terrain and land surface features and varying strongly from day to night and with synoptic and mesoscale weather situations.

Recent studies (Liu and Liang 2010; Seidel et al. 2010) have investigated aspects of the global climatology of PBL height using radiosonde data. A recent climatological study of the PBL over the continental United States and Europe (Seidel et al. 2012) estimated PBL height using a method based on the bulk Richardson number (Ri) (Vogelezang and Holtslag 1996), quantified observed diurnal and seasonal variations in PBL height (above ground level), and compared radiosonde observations of PBL height climatology to a reanalysis dataset and two climate models. The present study extends that work by examining long-term trends over Europe, where the time of radiosonde (launched at 0000 and 1200 UTC) sample interesting parts of the diurnal cycle of PBL height evolution (near midnight and midday).

The height of the PBL is often used in climate and air quality studies to characterize convective and turbulent processes, cloud entrainment, and air pollutant dispersion and deposition (e.g., Stull 1988; Seibert et al. 2000; Liu and Liang 2010). In general, a deeper PBL means greater vertical mixing and lower surface pollution concentrations; PBL height is greater when surface temperature is high and humidity is low, which result in surface sensible heat fluxes dominating latent heat fluxes and leading to increased buoyancy. Given that surface temperature has increased over most of the globe in recent decades because of increased atmospheric greenhouse gas concentrations (Solomon et al. 2007), it is reasonable to ask whether PBL height also changed during those decades.

The PBL height data used in this study are based on radiosonde observations from the Integrated Global Radiosonde Archive (Durre et al. 2006), using methods developed by Seidel et al. (2012), who give details of data processing, quality control, the algorithm for estimating climatological boundary layer heights, and methodological uncertainties. Seidel et al. (2012) evaluated 10 different methods for estimating PBL mixing height and identified a bulk Ri method (Vogelezang and Holtslag 1996) as best for climatological analysis of large datasets. The method is suitable for both stable and convective boundary layers; can identify a height in all cases; and is not strongly dependent on sounding vertical resolution, which is an important factor for long-term trend studies, because sounding resolution has increased as automated data processing capabilities have improved (Zhang et al. 2011).

In brief, the bulk Ri is defined as

where z is altitude, g is the acceleration of gravity, is virtual potential temperature, u and υ are zonal and meridional wind speeds, b is a constant, is the surface friction velocity, and the subscript s denotes the surface. The friction velocity term is much smaller than the wind shear terms in the denominator (Vogelezang and Holtslag 1996) and so is ignored in this study. As no surface wind components are reported in radiosonde observations, we set the surface wind to zero (Seidel et al. 2012). After deriving the Ri profile from a radiosonde observation, we scan it from the surface upward; identify the first level with Ri ≥ 0.25; and interpolate linearly between that level and the next lowest level to estimate the height at which Ri = 0.25, z(Ri0.25). We use the terms “PBL height” and “mixing height” as shorthand for z(Ri0.25).

Trends were computed for each of the four seasons [December–February (DJF), etc.] using data during the period 1973–2010. Trends were computed using the nonparametric median of pairwise slopes method (Lanzante 1996), with statistical significance levels based on Spearman rank-order tests. Because of the large differences in PBL between day and night (Seidel et al. 2012), 0000 and 1200 UTC profiles are analyzed separately.

For PBL height detection in a given radiosonde observation, we required at least 7 levels of reported temperature and humidity data and at least 4 levels of reported wind component data between the surface and 5 km above ground level. Station data were considered sufficient if at least 50 soundings per season met these criteria for identifying mixing height in a given year, and at least 25 yr of data met this requirement during the 38-yr period. Sensitivity tests indicated that varying these requirements slightly does not much influence either the data retention rate or the estimated trends.

In a related analysis of PBL trends in the Arctic, Zhang and Seidel (2011) identified spurious changes in surface-based inversion characteristics because of the changes in vertical resolution of radiosonde observations and stressed the need to ensure such changes do not bias trend estimates. Here we used similar nonparametric statistical methods to identify possible change points in time series of z(Ri0.25) associated with detected change points in vertical resolution at each station. By using 1973 as a start date and perhaps because mixing height is less affected by sounding resolution changes than surface-based inversion height, we found only a few stations whose records were affected by these data inhomogeneities. Those records were truncated to eliminate the lower-resolution data period. Even though the fraction of soundings with vertical resolution meeting our requirements increases over time, sometimes abruptly, at some stations, there are no sharp changes in PBL height.

These considerations resulted in 22 stations at 0000 UTC (near midnight) and 25 stations at 1200 UTC (near noon) for trend analysis, although not all stations had sufficient valid data in all four seasons. Table 1 gives station location information, along with seasonal trends. Because the nighttime trends are mainly not statistically significant, we focus on the daytime z(Ri0.25) changes here.

Seasonal trends in 1200 UTC planetary boundary layer height [z(Ri0.25)], surface relative humidity, surface temperature (z, RH, and T with units of m decade−1, % decade−1, and K decade−1, respectively), and the number of years used to calculate trends at stations with homogeneous time series. Trends in boldface are significant at the 95% confidence level or greater. Missing values indicate that there were insufficient radiosonde data for a particular station and season with the required vertical resolution to compute PBL height. 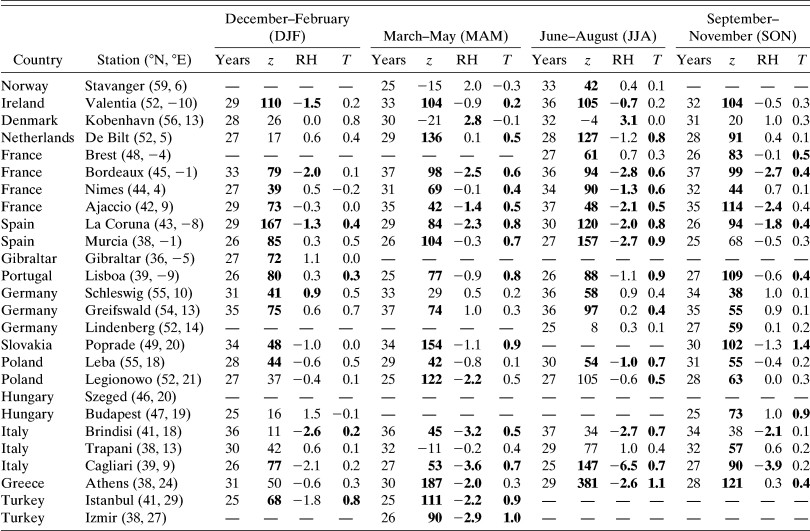 Analysis of trends in planetary boundary layer height over Europe during the period 1973–2010 has revealed significant changes in the daytime PBL and close associations with some surface climate variables. Most of the European stations analyzed show statistically significant increases in daytime PBL height z(Ri0.25) in all seasons. Nighttime trends are much smaller, less consistent, and less statistically significant. Daytime z(Ri0.25) shows strong negative correlation with surface relative humidity and positive correlation with surface temperature. The increases in PBL height are associated with decreases in surface relative humidity and increases in surface temperature.

Interpretation of these results is subject to a caveat related to the spatial representativeness of the radiosonde station data. Whether the trends presented here are indicative of changes over larger regions in Europe is difficult to ascertain.