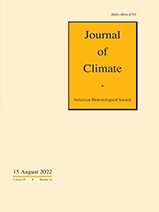 Masking used in the model experiments with enhanced positive cloud feedback. The red box is the Namib experiment, and the black boxes 1–9 are regional experiments in the South Atlantic.

Regression of observed SST (shaded), SLP (contours), and surface winds (vectors) on the Atl3 SST index (black box) for the years 1960–2010. Contours are from −2.0 to 2.0 hPa with an interval of 0.2 hPa. Solid lines refer to positive SLP anomalies, dashed lines refer to negative SLP anomalies, and the thick solid line is the zero-level contour. Stippling indicates where the correlation between local SSTs and the Atl3 SST index is statistically significant at the 95% level of the Pearson's r test for correlations. All data are detrended.

Regressions on the Atl3 index (black box) of cloud amount feedback (shaded; units of W m2 K−1) and cloud cover (contours; units of % K−1). Contour levels range from −10% to +10%, with 1% interval. Solid lines indicate positive values, dashed lines indicate negative values, and solid thick lines indicate the zero level. (a) Cloud cover is from ISCCP (years 1984–2007). (b) Cloud cover is from EECRA (years 1954–2008). In this plot, we use interannual anomalies differently from all the other plots because the temporal resolution of EECRA is of seasonal monthly means.

Difference in e-folding time scale between the nine enhanced cloud feedback experiments and the control simulation.

Power spectra of SST averaged over the Atl3 region (5°S–5°N, 20°W–0°) in the control simulation (black) and enhanced cloud feedback experiments (colors; see legend). A 24-month smoothing has been applied to the periodogram estimates. The power spectra are computed on time series of 80 yr with the exception of the lines with markers (see legend). 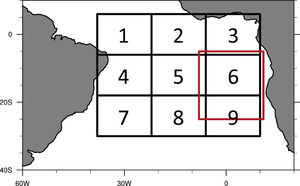 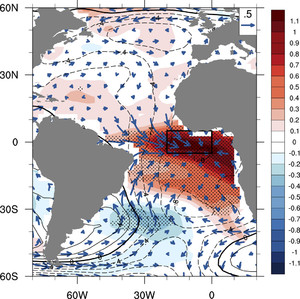 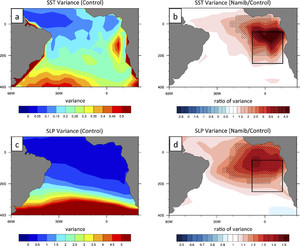 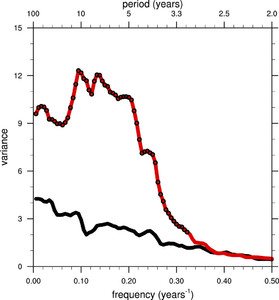 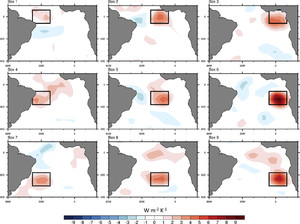 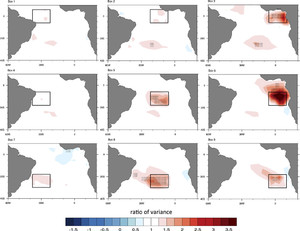 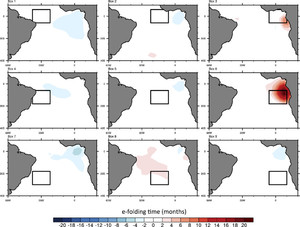 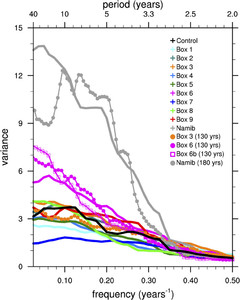 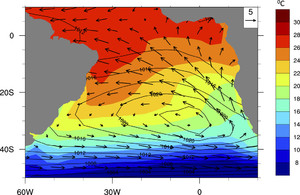 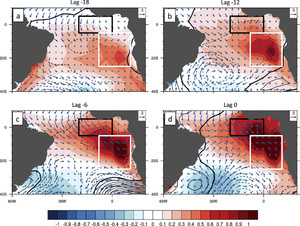 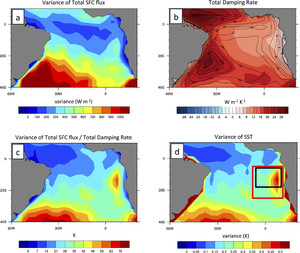 The Influence of Cloud Feedbacks on Equatorial Atlantic Variability