The 9-yr running mean of annual pressure anomaly observed at the summit of Mount Fuji and surface-pressure anomalies of the study area. 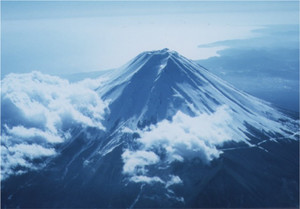 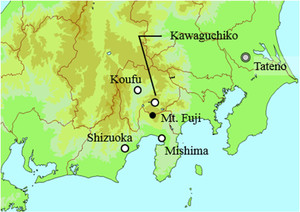 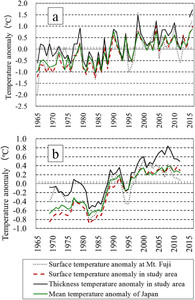 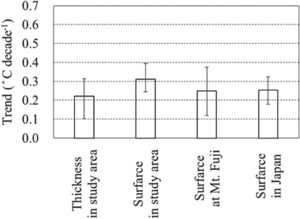 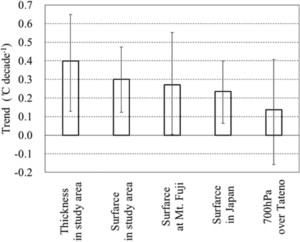 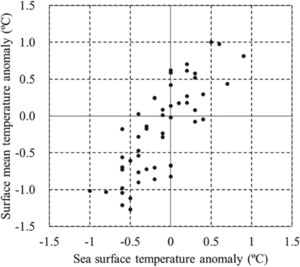 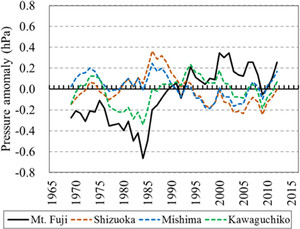 The quality of the evidence of increasing temperature is a long-standing issue for studies of global warming. Precise and consistent long-term measurements of temperature are not easy, even on a regional scale. Temperature data may include errors in calibrations and visual reading, especially in old data. Measurements at ground sites may be influenced by environmental changes such as urbanization effects and alterations in wind ventilation (exposure) as shown by Klotzbach et al. (2009). Furthermore, regional-mean multidecadal temperatures derived from observation networks may be affected by bias resulting from reorganizations of observation sites in networks. Therefore, multidecadal surface temperature trends could be affected by biases and uncertainties due to nonspatially representative influences (Klotzbach et al. 2009 and references therein).

where g is gravitational acceleration, R is the universal gas constant, and z1,2 and P1,2 are the altitudes and pressures at two levels, respectively.

Although calculations of thickness temperature cannot incorporate short-time adiabatic heating such as that produced from convective cumulus, this shortcoming can be neglected in determining temperature trends that have longer time scales. Pressure data, in general, have better precision than temperature data because pressure measurements and their calibration principles are simpler and more robust. Variations of pressure can be well characterized at synoptic scales, as shown by synoptic charts, and pressure measurements are little affected by changes in the surrounding environment. These features make thickness temperature advantageous for recording consistent long-term temperature trends in atmospheric layers with well-defined vertical boundaries.

Thickness temperatures are especially accurate when pressure data from a mountain site can be combined with observations from surrounding low-elevation surface sites because the altitudes of all observations are exactly known. Mount Fuji (elevation of 3776 m) is an isolated conical volcano in south-central Japan with steeply sloping flanks (Fig. 1). The observation records from the summit of Mount Fuji are relatively uninfluenced by the planetary boundary layer, and pollutant observations made from the summit are accepted as representative of the middle troposphere (Tsutsumi et al. 1994; Tsutsumi 2018). The thickness temperatures derived from pressure measurements by the network that includes the Mount Fuji observatory, thus, acceptably represents the mean temperature of the tropospheric layer below Mount Fuji.

a. Pressure measurement and derivation of thickness-temperature trend

Daily mean pressures at the Mount Fuji observatory (3775.1 m above sea level) and four surface sites within about 50 km of the peak (Table 1; Fig. 2) were used to calculate thickness temperatures from 1965 through 2016.

The precisions of the barometers at all sites were within ±0.1 hPa for the automated weather system and Japan Meteorological Agency (JMA) JMA-80 and JMA-95 systems, and within ±0.15 hPa for the JMA-10 system. These instruments are regularly maintained and calibrated according to the standard procedures of the JMA. It was important to consider the relocation history of the barometers (Table 2), as thickness temperature is sensitive to changes in altitude or pressure; a change of 1 m corresponds to about 0.08°C. These changes were incorporated in the calculations of thickness temperatures.

Changes in barometer altitudes (m) at the observation sites.

b. Surface temperature measurement and derivation of trends

Trends in surface temperature at the Mount Fuji observatory were based on the yearly mean temperatures published by the JMA (http://www.data.jma.go.jp/obd/stats/etrn/index.php). The replacement histories of observation systems in the observation sites and the precision of thermometers are listed in Table 3. Concerning the homogeneity of meteorological observations, the JMA controls data quality according to the guidelines (JMA 2005). Furthermore, the JMA judges statistical discontinuity of observations using the following conditions (JMA 2005):

Replacement date of meteorological observation system and precision of thermometers in the sites. JIS is Japanese Industrial Standards.

The observation data used in the trend analyses were those in which any statistical discontinuity is not detected. Because temperature measurements were not made at the Mount Fuji observatory from 16 July to 20 August 1970 and from 9 June to 2 July 2014, the yearly means for 1970 and 2014 were not used in deriving the trend.

c. Temperature measurement at 700 hPa by radiosonde and derivation of trends

The temperature trend in the middle troposphere (700 hPa) was derived from the radiosonde data over the Tateno station (36.06°N, 140.125°E; see Fig. 2), part of the Global Climate Observing System Reference Upper Air Network and the closest aerological station to Mount Fuji (145 km). Long-term temperature trends based on radiosonde data were usually subject to adjustments (Christy and Norris 2006; Christy et al. 2007; Christy and Norris 2009; Guo and Ding 2011). The histories of sonde sensors and their biases were presented in Uesato et al. (2008), and Kobayashi (2016) showed 0.18°C decade−1 as a temperature trend between 1958 and 2014 at 850 hPa over Tateno after the adjustment of temperature sensor biases.

However, neither temperature data before 1987 nor any adjusted data have been published over Tateno. In this paper, the temperature trend over Tateno was derived from yearly mean temperatures by the JMA monthly mean temperatures at 700 hPa at 2100 Japan standard time (JST) from 1987 through 2016 (http://www.data.jma.go.jp/obd/stats/etrn/upper/view/monthly.php), in which any adjustment was not made. The reason for employing the 2100 JST dataset is to avoid the possible influence of solar radiation; however, the temperature trend for 0900 JST is only slightly stronger (0.008°C decade−1), and the variation is very similar.

b. Yearly variation of running-mean temperature 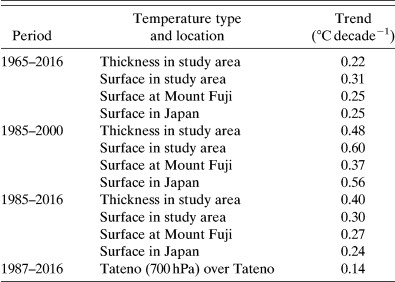 As shown in the running means of surface temperature and thickness temperature (Fig. 3b), the year 1985 is a turning point from decreasing to increasing trends. Consistent with this finding, JMA (2017) also showed the large increase after around 1985 in 5-yr running-mean surface temperature in Japan (their Figs. 2.1–3).

Variations of solar radiation at the ground surface can affect surface temperature. It is well known that global dimming changed to global brightening in the late 1980s (e.g., Wild et al. 2005; Streets et al. 2006) and global temperatures increased after the global dimming (Wild 2009). The 5-yr running mean of solar radiation in Japan (Fig. 4 in Ohmura 2009) displays a similar pattern of decrease followed by an increase; however, the minimum occurred in 1991, whereas the minimum in the 5-yr running-mean thickness temperature in the study area occurred in 1982 (this study; data not shown). Moreover, the yearly variations in solar radiation and thickness temperature were anticorrelated at times. Thus, the atmospheric temperature in the study is not strongly affected by the solar radiation in Japan.

Observations show that the pressure at the Mount Fuji observatory significantly increased by 0.15 hPa decade−1 from 1965 through 2016 (Fig. 7; Table 5), although the altitude of the barometer rose by 5 m in 2004 (Table 2). Please note that the pressure trend was not adjusted after the relocation of the barometer in 2004, which indicates the actual pressure trend at the same altitude was larger than 0.15 hPa decade−1. On the other hand, pressures at the surface sites near sea level showed no increase (Table 5). The pressure increase at the summit of Mount Fuji, thus, reflects an increase in thickness temperature in the layer below the summit.

Trends of pressures at the summit of Mount Fuji and surface sites. An asterisk indicates significance at the 95% level. In the trends, barometer relocations are not taken into consideration. Koufu is excluded because the altitude of the barometer significantly rose in 2004.

Klotzbach et al. (2009) suggested that a growing number of studies found biases and uncertainties due to nonspatially representative influences in the assessment of multidecadal surface temperature trends. In the Mount Fuji study area, however, pressure measurements are hardly affected by environmental changes, and the distribution of observation sites does not appreciably affect the trends in thickness temperature, as shown in section 3a. In this trend analysis, therefore, the biases and uncertainties in temperature trends cited by Klotzbach et al. (2009) are considered negligible.

This discussion excludes consideration of temperature trends based on radiosonde data because their observation altitudes, performed at constant pressure levels, have been found to be affected by atmospheric warming. On the other hand, trends in thickness temperatures, based on pressure measurements at exact altitudes, are generally considered to be a robust index of long-term temperature change in the troposphere because of the high precision, consistent stability, and synoptic extent of pressure measurements.