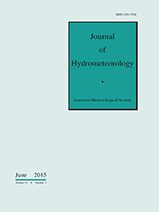 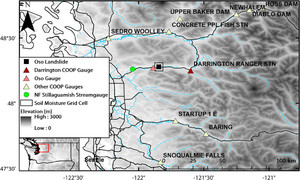 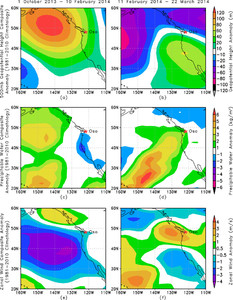 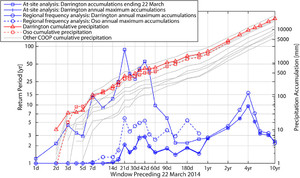 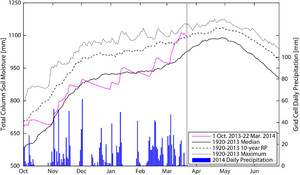 On 22 March 2014, a high-mobility landslide was initiated from a 190-m-tall bluff of unconsolidated glacial till and outwash sand 6 km east of the town of Oso, Washington. The landslide, with an estimated volume of 8 × 106 m3, crossed the entire 1-km-wide North Fork Stillaguamish River floodplain and State Route 530 and covered an area of 1.2 km2 to a depth as great as 20 m (Iverson et al. 2015). It destroyed over 40 structures in a rural neighborhood and killed 43 people (Keaton et al. 2014). In terms of loss of life, the Oso landslide (also called the SR 530 Landslide by the State of Washington), was the second worst in U.S. history, surpassed only by the 1985 Mameyes, Puerto Rico, landslide (Jibson 1992).

Landslides from Pleistocene-age bluffs have been widespread along this floodplain (Tabor et al. 2002; Dragovich et al. 2003; Haugerud 2014; Keaton et al. 2014), where unstable deposits of fine-grained lacustrine units at the base are overlain by outwash sand and topped with glacial till, creating conditions conducive to deep-seated landslides and slumps (Thorsen 1989; Miller and Sias 1997; Dragovich et al. 2003). The 2014 Oso landslide initiated from the recurrently active Hazel landslide, which slumped several times in previous decades (Shannon 1952; Benda et al. 1988; Thorsen 1989; Miller and Sias 1997, 1999; Keaton et al. 2014). Analysis of historical precipitation data combined with groundwater modeling (Miller and Sias 1997) indicated that landslide instability is sensitive to 1-yr cumulative precipitation, although Iverson (2000) argued that groundwater pressure distribution is the salient factor in triggering large landslides. Because specific linkages between groundwater, rainfall, and slope movements are not clear, analyses from this study cannot directly speak to failure mechanisms and instead indicate that other geophysical factors likely played a role.

The landslide site is characterized by the wet climate of the west slope of the Cascade Range (Fig. 1), where seasonal precipitation maxima normally occur between late fall and late winter. The 2014 Oso landslide came after 6 weeks of heavy rainfall, and others have reported nearby precipitation totals that approached gauge record maxima for 45-day and 4-yr intervals ending in March (Iverson et al. 2015).

We examine the hydroclimatic conditions in the vicinity preceding and at the time of the landslide, using regional synoptic information, historical records of precipitation, and model-reconstructed soil moisture. In so doing, we seek to place the event in a hydroclimatic context. We do not discuss failure mechanisms of the landslide, a topic which we leave to others. Rather, we focus on the synoptic setting, precipitation over time scales from days to years, and soil moisture indicators that may have contributed to local moisture fluxes associated with the landslide.

Our source of regional synoptic information was the NOAA Climate Forecast System, version 2 (CFSv2), analysis fields from 1 October 2013 to 22 March 2014. Anomalies were constructed from the CFSv2 reanalysis (CFSR) for 1 October 1980–22 March 2011 (Saha et al. 2010). CFSv2 and CFSR fields are available from the National Climatic Data Center.

Our primary sources of precipitation observations were a gauge at the North Fork Stillaguamish River near Oso (Oso gauge), approximately 3 km west of the landslide, and the NOAA Cooperative Observer (COOP) gauge located at the Darrington Ranger Station (Darrington gauge) approximately 18 km to the east of Oso (Fig. 1). The Oso gauge has been operated by the Washington Department of Ecology since 30 October 2011, while the Darrington gauge has been in operation since 1931. The Oso gauge is a Hydrological Services America tipping bucket; the Darrington gauge is an NWS standard 8-in. diameter (nonrecording) rain gauge (SRG). In addition, we identified nine other long-term COOP stations (all SRGs) within a radius of about 80 km of Oso (Fig. 1) and with homogeneous precipitation frequency distributions, using the criteria of Hosking and Wallis (2005).

To ensure that our return period calculations were robust, we also carried out a regional frequency analysis using the set of nine gauges plus the Darrington gauge. We created a pooled set of annual maximum precipitation accumulations from all sites, with the maxima scaled by mean at the site for each window. Estimating return periods using a pooled sample from multiple sites may help to reduce noise in a single-site analysis.

Soil moisture reconstructions were taken from the University of Washington’s Drought Monitoring System for the Pacific Northwest (DMS; www.hydro.washington.edu/forecast/monitor_west), which has a ° latitude and longitude resolution. It provides reconstructed soil moisture in three depth layers from the Variable Infiltration Capacity model (VIC; Liang et al. 1994) for the period 1920–2014, which is an index of conditions relative to climatology, but should not be interpreted as representing specific conditions such as subsurface moisture profiles at the landslide site. We analyzed DMS historical time series of total column soil moisture for the grid cell that encompasses the landslide site (Fig. 1) to determine whether the estimated soil moisture in 2014 was anomalous.

The SM provides greater detail on the approach used to fit probability distributions to the precipitation accumulations (SM1), the regional frequency analysis and the method of estimating return periods at the Oso gauge (SM2), and the hydrologic model used to generate the long-term series of soil moisture (SM3).

Water year 2014 (beginning 1 October 2013) was characterized by two extremes prior to the landslide on 22 March: a period of high pressure and dry conditions in the fall and early winter, followed by an anomalously wet period from mid-February through late March, in which moist, onshore flow dominated. Figure 2 shows the 500-hPa geopotential height, precipitable water, and zonal wind anomalies from climatology (1981–2010) for two periods: from 1 October 2013 to 10 February 2014 (dry) and from 11 February 2014 through the date of the landslide (wet). During the autumn and early winter dry period, a strong positive height anomaly reaching approximately 110 m was centered over the southern Gulf of Alaska, resulting in enhanced upper-level northerly flow over the west coast of North America (Fig. 2a). The column-total precipitable water for that period was below normal over the western United States (Fig. 2c).

The approximately 6 weeks of wet weather in the Pacific Northwest preceding the landslide were characterized by a different synoptic pattern, with a positive 500-hPa height anomaly of about 60 m over California and below-normal heights over the north-central Pacific and western Canada (Fig. 2b). The resulting geostrophic wind anomalies were southerly over a large portion of the eastern Pacific and westerly over the Pacific Northwest, a pattern that promoted the advection of tropical and subtropical moisture into the region. The precipitable water anomaly for this period (Fig. 2d) shows a plume of enhanced moisture (2–6 kg m−2) extending from Hawaii (Fig. 2d). Zonal wind anomalies show below-normal westerly flow in the early dry period and enhanced westerly flow during the preceding 6 weeks (Figs. 2e,f); increased westerlies enhance upslope flow on the roughly north–south-oriented Cascade Range.

Precipitation in the 21–42 days prior to the Oso landslide was heavy, reflecting the transition during the second week of February to strong onshore flow and anomalously high precipitable water over the region. We estimate that the 21-day accumulations had a recurrence interval of 2.1 yr when compared to annual maxima. However, when compared to only windows ending on 22 March, the peak return period was much larger (88 yr). This reflects the fact that heavy precipitation tends to occur earlier in the water year, typically from November through January. At the two precipitation gauges nearest to the landslide, the accumulated 21-day precipitation was 300–400 mm. We also found a second multiyear maximum for the 4 yr prior to the landslide. A regional analysis yielded essentially the same results as examination of individual gauges.

Soil moisture reconstructed from a regional model was anomalously high, in excess of the 10-yr return period just prior to the landslide. Six days prior to the landslide, soil moisture was at its water year 2014 maximum, with an estimated return period for that date of about 43 yr. An examination of groundwater storage inferred from summer base flow analysis was inconclusive (see SM4).

We did not examine the mechanisms that caused the landslide; such analyses are left to others. However, by placing hydroclimatic conditions during the event in historical context, our analysis should contribute to a better understanding of the events leading to the landslide.