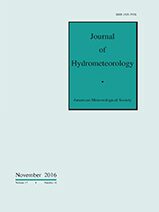 Tracks of Hurricane Irene from d01 of the WRF–NARR simulation and from HURDAT data. Irene moved from TC stage (solid) to extratropical transition and extratropical cyclone (ET/EX) stage (dashed).

The 6-hourly steering wind (m s−1; red), storm speed (m s−1; blue), and vertical wind shear (m s−1; black) along the track of Hurricane Irene. The steering wind is defined as the mean 850–500-hPa wind, averaging over a radius of 500 km from the storm center. The wind shear is defined as the mean wind difference between 200 and 850 hPa within an annular area between 200- and 800-km radii from the storm center. The steering wind and shear are based on d01.

Cyclone phase space diagrams for Hurricane Hanna (solid) and Irene (dashed) with (a) thickness asymmetry (m) vs and (b) vs .

Time series of (a) thickness asymmetry and (b) and for Hurricane Irene based on CPS method and atmospheric fields from the WRF–NARR run. The gray area indicates the ET period. The two horizontal black lines denote the times when criteria for onset and completion time of ET are satisfied.

Flood index, that is, the ratio of peak discharge to 10-yr peak discharge for Hurricane Irene. Analyses are based on flood peak observations from 1831 USGS stream gauging stations.

Storm total rainfall (mm) for Hurricane Irene from (left) stage IV radar rainfall fields and (right) WRF–NARR simulation. The time period is from 0000 UTC 27 Aug to 0000 UTC 29 Aug. Locations of the center of circulation of the storm are indicated by black dots from WRF–NARR (3 hourly; left) and best track data (6 hourly; right).

(a) Scatterplot of hourly rainfall of Hurricane Irene from rain gauges and from the WRF–NARR simulation, using the grid containing rain gauge and (b) time series of mean rainfall from all gauges, stage IV, and WRF–NARR at all corresponding gauges.

Rainfall distribution as a function of distance from the storm center of Hurricane Irene and time, based on (a)–(d) stage IV radar rainfall fields and (e)–(h) WRF–NARR simulation. The four quadrants are defined with respect to the direction of propagation of Irene. The black lines indicate the time of landfall, that is, 1200 UTC 27 Aug and 0935 UTC 28 Aug, respectively.

The rainfall composite of (top) stage IV and (bottom) WRF–NARR rainfall during TC and ET/EX stages for Hurricane Irene, respectively.

Time series of vertical wind shear with magnitude (m s−1) and direction (°) for Hurricane Irene. The direction is the anticlockwise angle from the north. The shear is the same as that in Fig. 3.

Locations of lightning from (a) Irene and (b) Hanna, respectively. The color indicates time.

The rainfall composite of stage IV and WRF simulation for Hurricane Sandy during ET/EX stage. 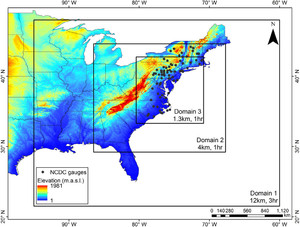 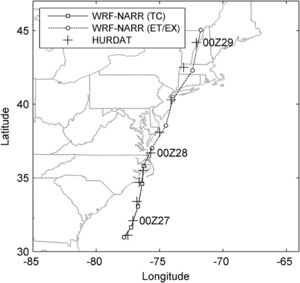 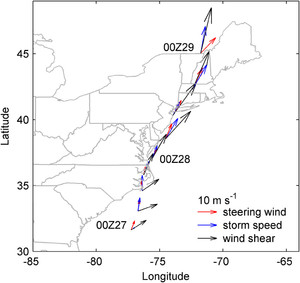 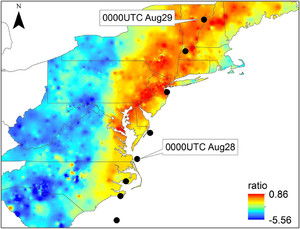 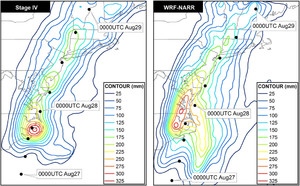 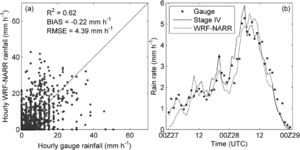 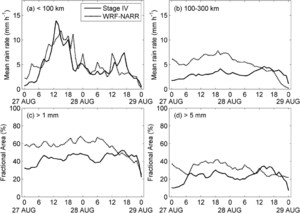 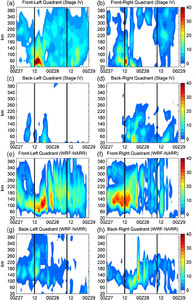 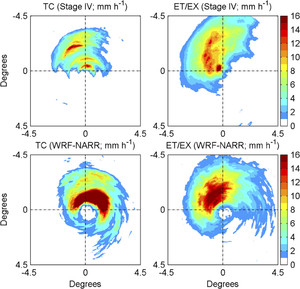 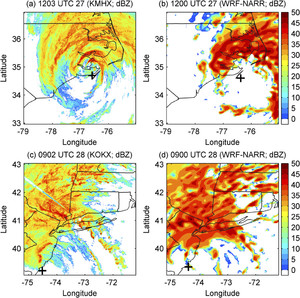 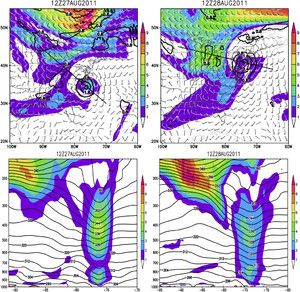 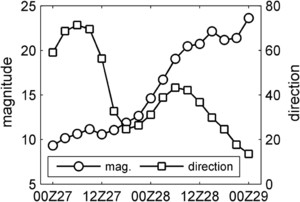 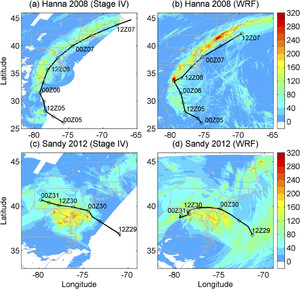 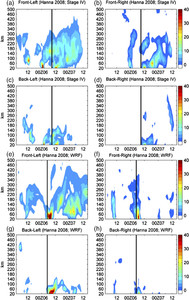 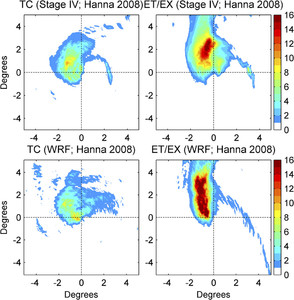 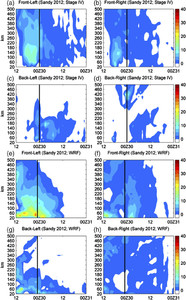 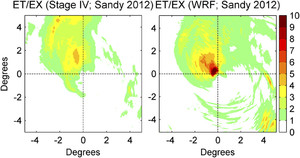