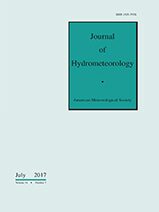 The spatial pattern of changes before and after 1980 for (a) magnitude of AMR; (b) magnitude of AMF; (c) SI of AMR; (d) SI of AMF; (e) antecedent storage, normalized by max storage; and (f) average event rainfall, normalized by MAP. The red dots denote statistically significant reductions, the blue dots refer to statistically significant increases, and the dashed lines are catchments with no significant changes comparing the periods after and before 1980.

Scatterplots of change in seasonality of AMF before and after 1980 vs changes in (a) antecedent storage, normalized by max storage, and (b) average event rainfall, normalized by MAP. Both relationships have significance level smaller than 0.05 (0.014 and 0.016, respectively). The spatial distribution of the seven geographic regions denoted by colors can be found in Fig. S4.

Scatterplots of (a) SI of AMF vs AMR for all the catchments (colored by the normalized antecedent soil storage) and (b) ratio between the SI of AMF and AMF vs antecedent storage of AMF events normalized by max storage, which can be approximately considered as the percentage of saturation. The hollow circles are estimated from the monthly mean storage of the MOPEX dataset while the black diamonds are estimated from daily soil moisture of 13 selected overlapping catchments from the Newman et al. (2015) dataset. 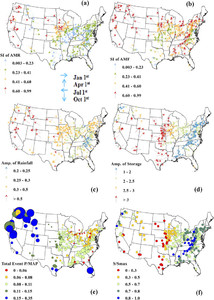 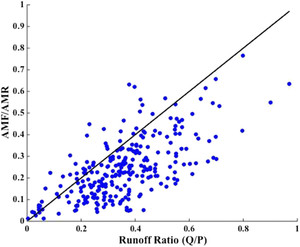 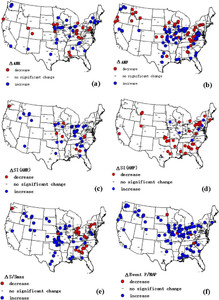