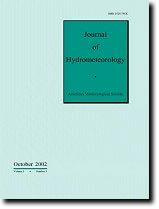 For many applications, earth system scientists can benefit from continuous (in space and time) representations of state variables, such as air temperature, precipitation, and snow depth. Unfortunately, most field observations are both spatially and temporally irregular. In the atmospheric sciences, a data assimilation procedure is commonly used to produce a continuous (in x, y, z, and t) and physically consistent representation of the atmosphere from a collection of irregular observations. The data assimilation procedure applies filters to extract the signal from the generally noisy observations, perform interpolation in space and time, and use atmospheric models to construct state variables that were not sampled by the observational network and to ensure the analyzed data are physically consistent. The models are based on general fluid mechanics equations applied to the earth’s atmosphere. These equations are the conservation laws applied to individual air parcels: conservation of momentum (equations of motion), conservation of energy (first law of thermodynamics), and conservation of mass for dry air and moisture (continuity equations). The resulting analysis is an optimal combination of the available observations and model representation. Thus, the analysis dataset contains the advantage of spatial and temporal continuity but also includes the possible disadvantage of being removed from the original observations. In this paper, we summarize the atmospheric analysis–related data available within the Cold Land Processes Field Experiment (CLPX; Elder et al. 2008) archive. The datasets are archived at the National Snow and Ice Data Center (NSIDC) in Boulder, Colorado (available online at http://nsidc.org/data/clpx/).

The Local Analysis and Prediction System (LAPS; McGinley et al. 1991; Albers 1995; Albers et al. 1996; Birkenheuer 1999; Hiemstra et al. 2006), developed and operated by the National Oceanic and Atmospheric Administration’s (NOAA) Earth System Research Laboratory (ESRL), combines numerous observed meteorological datasets into a unified atmospheric analysis, typically with a time interval of an hour or less. An analysis contains both spatially and temporally continuous atmospheric state variables, in addition to special atmospheric- and land-based fields over Colorado, Wyoming, and parts of the surrounding states (Fig. 1). The quasi-operational analysis used for development at ESRL utilizes a 10-km horizontal grid (125 × 105) with 21 isobaric vertical levels and an hourly temporal resolution. The purpose of a system such as LAPS is to not only provide an up-to-date atmospheric state representation for nowcasting and assessment but also serve as a mechanism to initialize local-scale mesoscale weather forecast models.

LAPS, like many analysis systems, begins with a first guess or a background field interpolated to a finer grid from a coarser large-scale forecast model output. The source for LAPS background fields is generally Rapid Update Cycle (RUC) forecasts (described below), but it is also configured to use Medium-Range Forecasts (MRFs), the National Centers for Environmental Prediction (NCEP) Eta Model, and Navy Operational Global Atmospheric Prediction System (NOGAPS) forecasts [high-resolution backgrounds from the fifth-generation Pennsylvania State University–National Center for Atmospheric Research Mesoscale Model (MM5) or the Weather Research and Forecasting (WRF) Model can also be used for a 4D variational application if lateral boundary conditions are not critical]. The LAPS analysis is a series of routines that then takes the local observations with other nationally disseminated data and modifies the background field to match those observations. In addition, quality control measures (buddy checking and weighting by measurement error) are used to assess the observations and reject those that are deemed unsuitable. Different analysis methods are currently used in the set of analysis routines consisting of Kalman, traditional Barnes, and variational minimization techniques, depending on the dataset (e.g., Daley 1991).

A recent and valuable addition to the LAPS system is termed the “hot start” method for model initialization. Conventional numerical weather models take a few hours to “spin up” convective activity—precipitation processes that are vital to weather forecasting. The hot start method developed at ESRL uses the cloud field that is analyzed from satellite, radar, surface, and aircraft data and imposes a balanced vertical motion field in regions of the “observed” analyzed clouds with constraints based on stability and cloud type. Because this balanced field is dynamically consistent, when the 3D winds and temperatures are inserted into a forecast model, the model accepts them directly; thus, precipitation spinup time is either greatly reduced or, in most cases, completely eliminated.

An example application using the archived LAPS datasets can be found in Liston and Elder (2006a), in which LAPS meteorological outputs (air temperature, relative humidity, wind speed and direction, and precipitation) were used to drive micrometeorological model (MicroMet) simulations over the CLPX Rabbit Ears MSA. An additional LAPS data application can be found in Liston et al. (2008), where LAPS data were used to drive snow-evolution modeling system (SnowModel; Liston and Elder 2006b) simulations over all three CLPX MSAs shown in Fig. 1.

When the source for the LAPS background fields are provided by RUC outputs, the RUC data are treated as a LAPS data source in the first guess, which are then refined by the addition of information from other data sources. If there are no other data, any coincident initial LAPS grid points will be very close to the RUC value, but this is generally the exception. The RUC outputs are not sufficient to provide a hot start capability (mentioned above) to LAPS. RUC lacks the cloud scale information that is inserted by LAPS through the cloud analysis and subsequent balance constraints to support a local-scale vertical motion field suitable for a mesoscale model hot start. Without imposing a horizontal thermal and wind structure to support the imposed vertical motions, any vertical motion field would typically be destroyed by the model in the first one or two time steps.

The CLPX RUC20 analyses archive spans the period 1 October 2002 through 31 September 2003 at an hourly time increment. The archive includes the three-dimensional and surface variables listed in Table 2. Like the LAPS data, the RUC20 data are available for a wide range of applications, including studies of large-scale weather patterns and timing, as well as surface energy- and moisture-flux analyses.

Summary of LAPS variables available within the CLPX data archive.

Summary of RUC20 variables available within the CLPX data archive.