This image is a composite of sea surface temperature data acquired between 31 August 1996 and 3 September 1996. Clearly shown is a swath of cooler water correlated with the ground track of Hurricane Edouard. The temperature scale shown at the bottom is dynamically selected for each image to maximize the visual dynamic range.

Composite sea surface temperature from 27 to 30 August 1996. Note the Gulf Stream and the two warm-core rings. The temperature scale shown at the bottom is dynamically selected for each image to maximize the visual dynamic range.

This image shows a single pass of AVHRR data acquired at 1118 UTC 1 September 1996. The swath of cooler water is visible here. The temperature scale shown at the bottom is dynamically selected for each image to maximize the visual dynamic range.

Composite sea surface temperature from 27 to 30 August 1996, with Hurricane Edouard’s wind speed show graphically along the track of the hurricane’s eye. The temperature scale shown at the bottom is dynamically selected for each image to maximize the visual dynamic range. 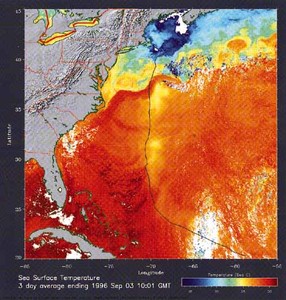 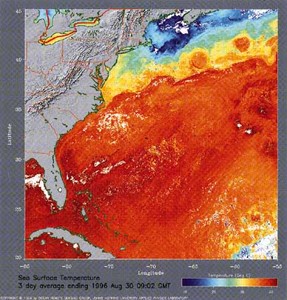 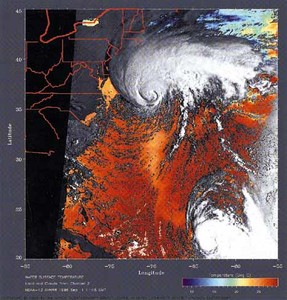 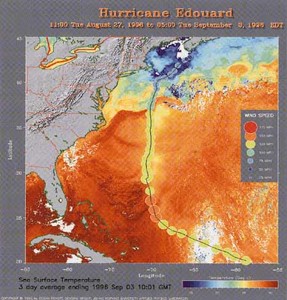 Editorial Type:
Picture of the month (MWR only)

It is well documented that in the wake of a hurricane there is significant cooling of sea surface temperature (SST) (Hazelworth 1968; Brand 1971; Federov 1972; Stramma et al. 1986; Shay et al. 1992; Pudov et al. 1978; Pudov 1980; Black and Holland 1995). Figure 1 represents a dramatic recent example of such cooling observed from satellite radiometer data after the passage of Hurricane Edouard (1996) off the east coast of the United States. The figure is a composite of SSTs derived from Advanced Very High Resolution Radiometer (AVHRR) data broadcast over 3 days (0531 UTC 31 August 1996–1001 UTC 3 September 1996) by the polar-orbiting NOAA-12 and NOAA-14 satellites. This sea surface temperature image clearly shows a swath of water approximately 4°C less than the surrounding water centered slightly east of the track of Hurricane Edouard’s eye. In this paper, we describe the process used to construct Fig. 1 from AVHRR data. We also review the various mechanisms by which hurricanes induce SST cooling.

The AVHRR data consist of imagery at five separate optical channels given in Table 1. Channels 1 and 2, the visible and near infrared (IR), respectively, show reflected sunlight within their respective wavelength regimes. Channel 3 is sensitive to blackbody temperature emissions with a significant contribution from reflected sunlight during the day. Infrared channels 4 and 5 are primarily sensitive to blackbody emission from the sea surface. Channels 4 and 5, and sometimes 3, are combined to remove the effects of the intervening atmosphere and to provide estimates of the sea surface temperature. Specific algorithms for SST retrievals can be found in Bernstein (1982).

The AVHRR instrument is a scanning device. A maximum resolution of 1 km is possible nadir to the spacecraft. The resolution degrades to over 2 km near the swath edges.

One of the limitations of AVHRR imagery is the presence of clouds. Clouds are generally opaque to optical transmission. SST cannot be retrieved from areas obscured by clouds. The TeraScan software determines cloud-contaminated pixels by examining the brightness temperatures measured in channels 4 and 5. The tops of deep clouds usually register around 0°C or less. In addition, the local variance around individual pixels is examined. High variance indicates subpixel size clouds. We do not apply the multichannel sea surface temperature retrieval algorithm to cloud-contaminated pixels.

To alleviate the effect of clouds, we generate composite AVHRR images. Sea surface temperature features generally change on scales of several days. Cloud cover changes daily. Therefore, over several days much of the ocean surface off the east coast of the United States is visible at one time or another. In composite images, we combine SST data over several days. We usually can create SST maps that reveal ocean circulation signatures obscured by clouds on any given satellite pass.

Figure 2 is a composite SST image of the eastern North Atlantic generated from data acquired from 0053 UTC 27 August 1996 to 0902 UTC 30 August 1996, the last composite image we generated before the passage of Hurricane Edouard. The color scale is chosen dynamically to provide the maximum dynamic range. The white and blue pixels represent cloud-obscured areas. The warm water of the Gulf Stream, as it flows away from Cape Hatteras, and two warm-core rings north of the stream are clearly visible. Unlike Fig. 1, this image shows no cool water swath.

One potential concern in associating the cool swath in Fig. 1 with SST cooling is that clouds associated with Edouard may have fooled the process used to generate the composite images. We dismiss this possibility in two ways.

Second, even more persuasive evidence is found by examining the image in Fig. 3. This image represents data from a single overpass of NOAA-12 at 1118 UTC 1 September 1996. For those pixels associated with cloud-covered areas or land, we show data from channel 2. In the cloud-free areas over the ocean, we show SST in a false-color scale. The most conspicuous parts of this image are the cloud patterns associate with Hurricane Edouard to the north and Hurricane Fran to the south. Less conspicuous, but still apparent, is a cold temperature swath following the path of Hurricane Edouard. Recall that this track was not found in Fig. 2, the composite image prior to the passage of Edouard. This cold water swath is visible in a number of individual passes used to generate the composite image shown in Fig. 1. The cold water is clearly not a cloud artifact in the processing.

With maximum horizontal winds above 33 m s−1, hurricanes have profound effects on the underlying sea surface. The hurricane obtains its energy from the warm sea surface, both locally and remotely, through fluxes of sensible and latent heat. While the local thermodynamic effects play a role in cooling the ocean surface along the hurricane track, evidence suggests that upwelling and turbulent ocean mixing are the dominant mechanisms for the observed SST cooling observed in the wake of hurricanes (Price 1981; Sanford et al. 1987). Hurricane-induced surface cooling may influence the strength of subsequent hurricanes crossing the cool wake (Brand 1971). Even a 2°C sea surface temperature change may have a significant impact on the strength of a hurricane (Anthes and Chang 1978). In addition, Black and Holland (1995) described how hurricane-induced SST cooling may impact the parent storm. Numerous investigations have been conducted on the effects of hurricane passage on the temperature structure of the upper layers of the ocean. We direct readers to recent reports from the Tropical Ocean Global Atmosphere Coupled–Ocean Atmosphere Response Experiment investigators, especially Gosnell et al. (1995).

Note that the position of the cool water wake is shifted to the right of the hurricane track shown in Fig. 1. Because of the translational movement of the hurricane, the maximum horizontal winds are found to the right (left) of the track of the eye for Northern (Southern) Hemisphere hurricanes. Early investigators argued that the presence of these stronger winds was sufficient to shift the position of the cool water wake relative to the track (e.g., Hazelworth 1968; Pudov et al. 1978; Pudov 1980). However, more recent investigations suggest that this lateral shift is better explained by the additional effects of a near-inertial response of the ocean mixed layer to the asymmetric surface wind stress (Price 1981; Shay and Elsberry 1987; Shay et al. 1989; Shay et al. 1990).

AVHRR temperature imagery also provides a clear example of the reduction in hurricane wind speed corresponding to a change in SST. Figure 4 shows the same composite image shown in Fig. 1, with circles representing the wind speed of Hurricane Edouard. Note that as the eye of Edouard crosses the Gulf Stream and encounters the much cooler slope water, the wind speed drops from the 125 mph (64 m s−1) range to the 75 mph (39 m s−1) range.

This paper illustrates the value of satellite ocean remote sensing for evaluating the impact of hurricanes on the SST field. The NOAA AVHRR images presented in this paper clearly depict a cooling of SST by approximately 4°C along a path to the right of the track of the eye of Hurricane Edouard. We have shown that this finding is not an artifact of data processing.

In the Northern Hemisphere, the region on the right side of the track of the eye contains the strongest winds. Therefore, this swath of cooler SSTs corresponds to the region of strongest winds for this hurricane. The remotely sensed SST measurements shown here are therefore consistent with that of previous in situ and modeling studies.