As in Fig. 2, but for precipitation. 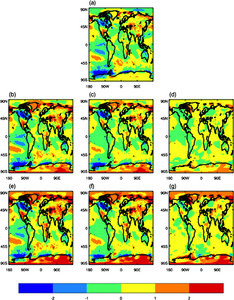 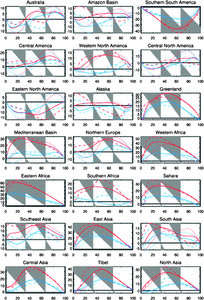 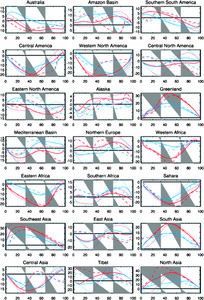 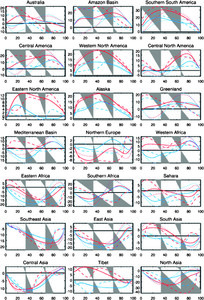 Forecasting with Reference to a Specific Climatology

Seasonal forecasts are often issued as a deviation from a specified reference period (or climatology). This format enables users to see if the forecast represents an increase or decrease in risk from what is normally expected. Three common ways to express forecasts of this nature are as follows: 1) as an anomaly from a particular reference value, 2) as a percentile of a climatological distribution, and 3) as the probability of an event occurring. Forecasts can also be expressed in their original units (i.e., real-world values without reference to a climatology), but this is less useful for risk management.

Forecasting against a model reference/climatology serves another purpose: it provides a simple linear way to remove biases in dynamical model output (Stockdale 1997). The model climatology is defined by running retrospective forecasts (hindcasts) for a set of start dates in the past (the hindcast period). Different centers use different hindcast periods (Table 1), and so reference periods vary between centers. This causes a problem as it is common to collate information from different sources when producing seasonal forecasts because of the improvements in reliability and consistency (Hagedorn et al. 2005). Clearly, attempting to compare forecasts that are against different reference periods has the potential to introduce biases due to long-term trends or low-frequency variability. However, the practice is common and even multimodel forecasts shown by the World Meteorological Organization (WMO) lead center for long-range forecasting (http://www.wmolc.org) are made from forecasts with varying reference periods. In this paper we hope to persuade users of dynamical monthly-seasonal forecast products of the need to objectively account for the different reference periods in the information that they collate. 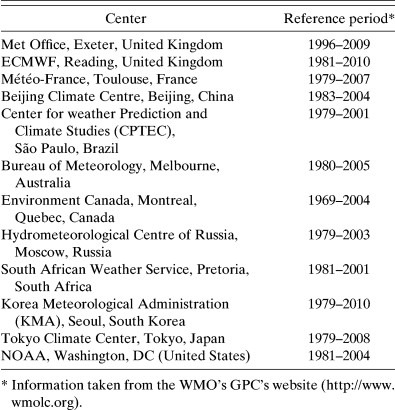 The ensemble mean forecasts in this study (section 2a) are from the Met Office operational global seasonal forecasting system (GloSea4; Arribas et al. 2011). Analysis is presented using operational forecasts of March–May 2010 (MAM); results were similar for other periods and for the European Centre for Medium-Range Weather Forecasts (ECMWF) system. For each operational forecast (42 ensemble members), 168 hindcast members were used to make the bias correction: 12 members for each year of the 1996–2009 hindcast period.

The datasets used as observations are as follows. Near-surface temperature (2mT) data were obtained from the National Centers for Environmental Prediction (NCEP) reanalysis [provided by the National Oceanic and Atmospheric Administration/Earth System Research Laboratory/Physical Sciences Division (NOAA/ESRL/PSD), Boulder, Colorado, from their website http://www.esrl.noaa.gov/psd/]. The precipitation dataset was from version 2.2 of the Global Precipitation Climatology Project (GPCP; Adler et al. 2003; Huffman et al. 2009). The MSLP was from the near-real-time update of the Hadley Centre sea level pressure model, version 2 (HadSLP2r; Allan and Ansell 2006).

b. The correction methods

We present three methods that can be used to display an ensemble forecast with respect to a specific reference period (Table 2). Each method assumes the model has particular systematic errors and tries to estimate and remove them as follows:

Algebraic description of methods 1–3.a

Method 2—Assumed biases in the mean and interannual variability are removed by subtracting the model’s climatological mean, inflating/deflating the variance of the resulting anomalies to make them in line with observations, and adding the observed climatological mean from the hindcast period.

Method 3—Errors in the model’s distribution (which includes errors in mean and interannual variability, but also, e.g., in skewness) are removed by expressing the forecast ensemble members as a percentile of the model’s climatological distribution, and then matching these percentiles against the percentiles of the observation over the hindcast period.

When choosing a method there is a balance: it is desirable to correct as many of the errors as possible, but to rely on the fewest estimates of these errors. For example, if it was believed that the model does not have errors in its interannual variability, then one would not wish to risk introducing noise by attempting to estimate the error in variance. Method 3 has the potential to introduce more noise than either method 1 or 2, so this method should be avoided unless it is thought to be necessary.

a. Assessing the correction methods on the ensemble mean anomalies

Figure 1 illustrates (for 2mT anomaly) the differences between ensemble mean forecasts that are identical except in their reference period. In general, for the same forecast, anomalies are greater against the older (cooler) reference period than the newer (warmer) ones. This is most evident at high latitudes, in particular in northeast Canada (a difference of more than 4°C, Fig. 1g). There are also examples of the sign of the anomaly varying depending on the reference period (e.g., over the United Kingdom and Spain). This example illustrates that if forecasts that are against different reference periods are combined then the true forecast signals may be obscured.

Of the three methods presented earlier, the method used to convert the forecast is relatively unimportant (cf. method 1 in the left-hand column to method 3 in the middle column). Even in the regions where the largest differences are observed (e.g., the United States), the main message of the forecast is not significantly changed by using an alternative method.

b. Assessing the correction methods on individual ensemble members

Using the synthetic ensemble we now look at the effect of reference period correction on individual ensemble members for 2mT, precipitation, and MSLP. In this analysis we call ensemble members expressed against the 1996–2009 period the “original” members (x axis, Fig. 2), those expressed against the 1981–2010 or 1971–2000 periods “corrected,” and the difference between these (corrected − original) the “correction difference” (y axis, Fig. 2). In general, correction differences are positive, as the 1996–2009 hindcast period is usually warmer than the 1981–2010 and 1971–2000 periods (Fig. 2).

Probabilistic seasonal forecasts are often made by counting the proportion of ensemble members that fall into a particular tercile category. The tercile into which an ensemble member falls depends on the period over which the tercile is calculated. Consider the 30th member of the synthetic ensemble: in the original ensemble this member is equal to the 30th percentile (by definition), and so is in the lower tercile when the reference period is 1996–2009. If, say, against the 1971–2000 period it were corrected to the 40th percentile (correction difference of 10) then the member would now count toward the middle tercile. A switch like this alters the “message” that the ensemble member gives, and therefore is important to highlight in this analysis. We have done this in Fig. 2 by shading areas in gray areas where a switch of tercile would occur. Notice that close to a tercile boundary, even a small correction difference (of the relevant sign) can result in a change of tercile, and so the gray area approaches the x axis close to tercile boundaries.

In regions where the method choice has a large influence on the resulting corrected ensemble (e.g., northern Europe), the differences between methods should be seen as an incentive to investigate the most appropriate method for the correction rather than to not make a correction. However, it may not be straightforward to ascertain the most appropriate method, so we now investigate the consequences of making an uninformed choice of method.

c. The consequence of an uninformed decision

In this section we attempt to answer the question: “If it is not possible to ascertain the optimal method, is it safer not to correct for reference period at all?” To do this we estimate the probability that a randomly selected method is better (closer to some unknown perfect correction method) than leaving the original ensemble without correction, calling this the probability of improvement. As a first approximation, if the probability of improvement is greater than 0.5 then the reference period should be corrected even if there is no conclusive evidence that could be used to select the best method.

The probability of improvement is estimated using the synthetic ensemble to find the proportion of ensemble members for which the perfect method is closer to one of methods 1–3 than it is to the original ensemble. Closeness is measured as the absolute difference between methods for each ensemble member, when expressed in the percentile format. As the perfect method is unknown we assume that one of methods 1–3 is perfect. While this is unlikely to be true, given that the methods each use different assumptions as to the nature of the systematic errors in the model, it is reasonable to use one of the existing methods as a proxy for the perfect method. To protect ourselves from overestimating the probability of improvement we do not compare the closeness of the assigned perfect method to itself.

The probability of improvement over all regions ranges from 0.3 (Amazon basin) to 1 (central Asia and eastern Africa), with an average value of is 0.8 for the 1971–2000 period, and from 0.43 (central North America) to 0.93 (eastern Africa) with an average value of 0.7 for the 1981–2010 period. For the majority (>80%) of regions probabilities are greater than 0.5, which indicates that in general there is less risk involved in randomly selecting a correction method than in not correcting for reference period at all. This has the implication that for most regions the best strategy is to implement a correction method first, and then to attempt to pick the optimal one.

For ease of production and use, seasonal forecasts using dynamical model output are most commonly issued as anomalies from a multiyear average or as the probability of an event, where the event is defined using a particular reference period. We have shown that there is strong evidence that differences between reference periods should not be ignored. We have offered three methods by which the reference period could be corrected, and have shown that the differences between them are small. This indicates that the particular method chosen to adjust the baseline period is less important than the fact that the baseline should always be corrected.

A problem remains that many users of seasonal forecast products (e.g., those displayed on http://www.wmolc.org), do not have access to the hindcast data for making reference period corrections. In these cases it is recommended that users still try to take account of differences between reference periods objectively. For plots in probabilistic format this would be extremely difficult. This should be considered when producing centers decide what information to make publically available.