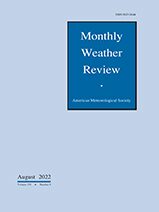 Meteograms showing the passage of the prefrontal wind-shift line and cold front at (a) Guthrie, OK, and (b) Norman, OK. The frontal passage is indicated as “FROPA” and the prefrontal wind-shift line is indicated as “WINDSHIFT.” Times are given in local time (small numbers), but UTC is also shown at 2100, 0000, and 0300 UTC. (from top to bottom) Temperature (pink) and dewpoint (green) (°F), wind direction (small circles), and speed (blue; kt, or ~ m s−1 × 2); station pressure (brown; hPa); rain (green; in.); and insolation (orange; W m−2), where the maximum possible without clouds is given in gray.

As in Fig. 4, but an expanded view of just (a) radar reflectivity ZH and (b) Doppler velocity V, of an area to the west of Norman, which shows evidence of bores. Arrows point to bands of enhanced reflectivity and a Doppler component away from the radar (yellow), with the approaching component (green) in between, probably associated with bores. Large black dot indicates the location of the radar.

(a) Dual-Doppler lobes (regions where the between beam angle is between 30° and 150°, coded as transparent green) for RaXPol and KTLX. The 12-dBZ reflectivity contour from KTLX at the analysis time (2351:25 UTC 11 Nov 2013) is shaded in yellow; (b) dual-Doppler analysis of the horizontal wind field at 200 m AGL, 10-dBZ contour of radar reflectivity from KTLX, and vertical vorticity (color scale); (c) as in (b), but at 800 m AGL, and vertical velocity (color scale).

Idealized depiction of an “intrusion” propagating horizontally inside a stratified fluid, not on a well-defined lower boundary. [After Ungarish (2009), see his Fig. 1.1.]

Surface observations with the cold front indicated (solid black line), from the Oklahoma Mesonet, at 2150 UTC (1650 CDT) 9 Apr 2013. The black dot indicates the location of RaXPol; sites at Apache (APA) and Chickasha (CHK) are noted. Temperature and dewpoint are plotted in °F; whole wind barbs = 5 m s−1, and half wind barbs = 2.5 m s−1.

Approach of a strong cold front as depicted by RaXPol (a) radar reflectivity factor (ZH; dBZ) and (b) Doppler velocity (V; m s−1), at 2122:01 UTC 9 Apr 2013, at 3° elevation angle. In (a), a fine line is seen just to the rear of the wind-shift line (white) and arrows point to selected fine lines probably associated with horizontal convective rolls in the boundary layer. In (b), the wind shift at the front is marked by a black line. Range rings are marked every 5 km.

As in Fig. 17, but at 2224:45 UTC, while the cold front was moving away, and at 2° elevation angle. Bowed segments (bulges) in the fine line are marked. Beam blockage from nearby ground clutter is evident in some azimuthal sections, particularly in the sector from west-southwest to north-northwest of the radar.

A map of portions of central and west-central Oklahoma showing mesonet sites, county boundaries, KTLX, and the location (P) southeast of Apache of the photograph shown in Fig. 15. 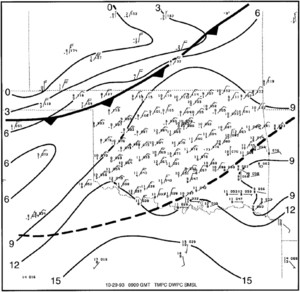 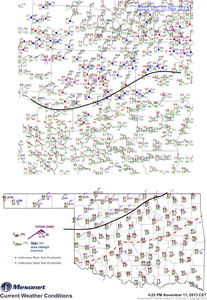 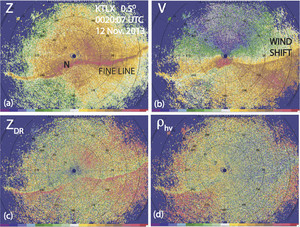 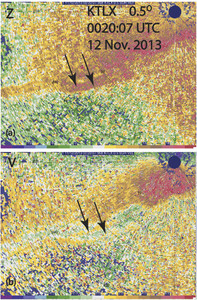 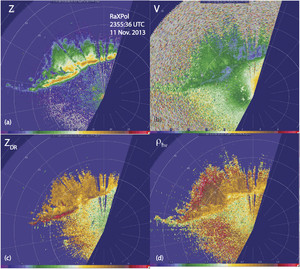 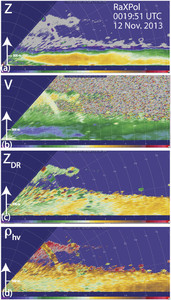 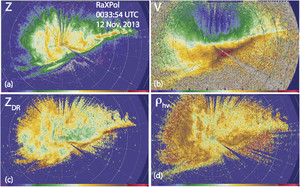 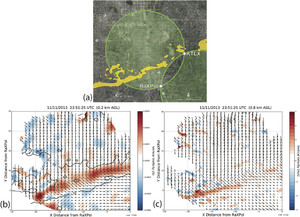 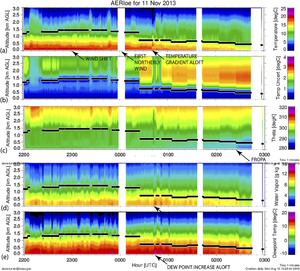 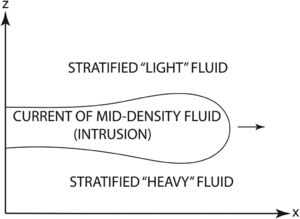 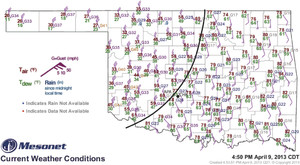 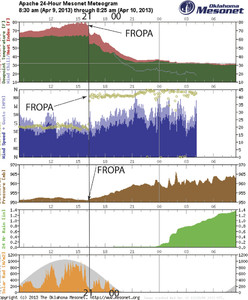 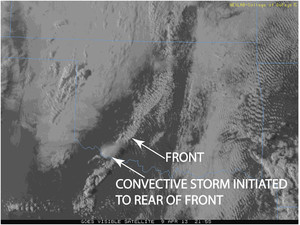 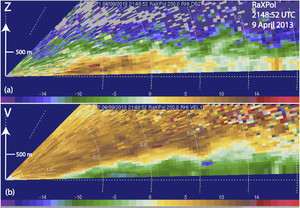 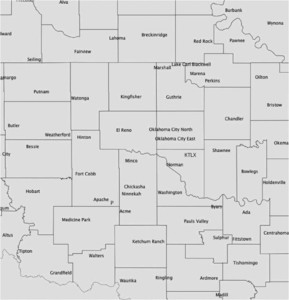