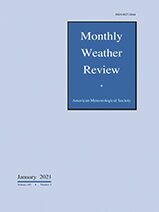 (a) Model domain and topographical height (in m) of the WRF simulation with a horizontal resolution of 10 km. The labels “North Atacama,” “NE Atacama,” “South Atacama,” and “SE Atacama” refer to the naming convention for the four cluster domains (see Fig. 2a) used throughout the manuscript. The red dot represents the location of Antofagasta. (b) WRF-simulated (shaded surfaces) and observed (shaded points) mean annual rainfall (in mm yr−1) for the period 1982–2017.

(a) Partitioning of the WRF Model grid points into four rainfall clusters, and (b)–(e) the simulated mean annual cycles of precipitation at all grid points belonging to clusters 1–4 as obtained by the hierarchical clustering. The lines in (b)–(e) are randomly shaded for visibility purposes. For more details, see main text.

Composite means of z500 (green contours, every 20 gpm) and upper-level IWVF (black arrows, in kg m−1 s−1) and composite anomalies of IWV (shading, in kg m−2) from ERA-Interim for (a) day 1 and (b) day 0 of the 1 Jul 1983 event of the cl1_MJJA composite (South Atacama). The IWV anomalies are given relative to the climatology for July. (c)–(f) Longitude–height cross sections at 24°S (cf. Fig. 9a) of WRF-simulated u–w wind components (black arrows, in m s−1; w component has been multiplied by factor of 30), cloud liquid water content (contours, every 2 g kg−1), and anomaly of specific humidity (shading, in g kg−1) at 0800, 1400, 1800, and 2300 UTC of day 0. The specific humidity anomalies are given relative to the climatology over the respective hour of all July months. Height on the y axis is given in km. 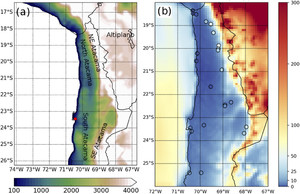 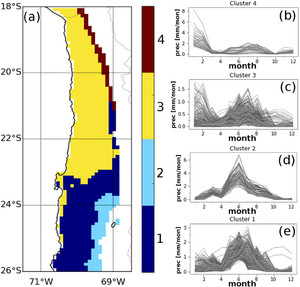 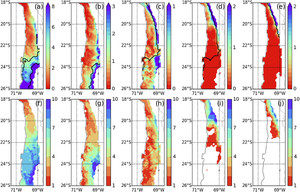 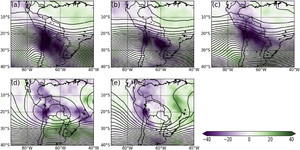 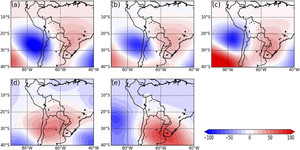 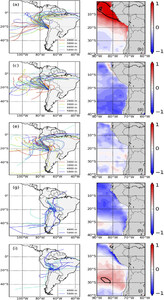 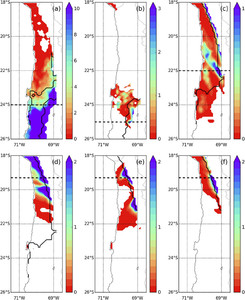 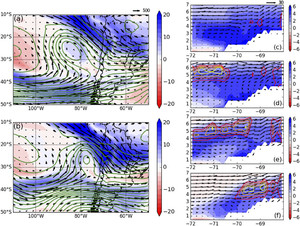 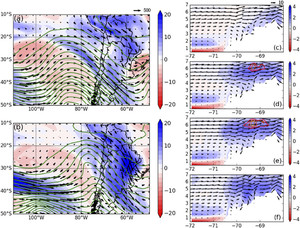 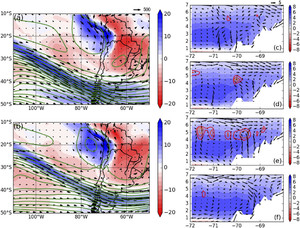 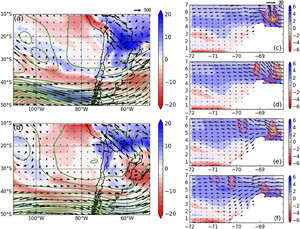 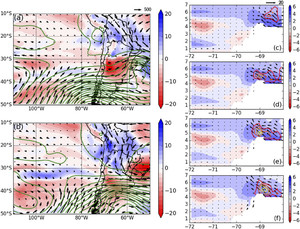 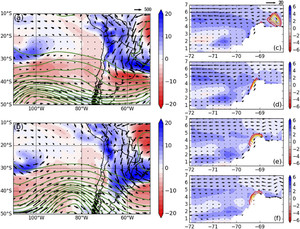