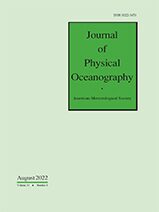 Part of the model domain with bottom topography [depth (m)] and names of features mentioned in the text. Integral quantities for the Arctic Ocean have been integrated within the area outlined by thick black lines. Arctic freshwater export was calculated across these boundaries.

Freshwater content, measured as the thickness of a column of freshwater to be added to a water column of constant 35- psu salinity to arrive at the observed salinity. Derived from (a) the PHC atlas (Steele et al. 2001a) and from (b) the model result averaged over the last 54 years of the simulation.

(a) Time series of the freshwater content in the upper 350 m of the Arctic Ocean. For boundaries see Fig. 1. The integration lasts for 216 yr, i.e., four repetitions of the NCEP–NCAR forcing period 1948–2001. The time axis from 1783 thus does not imply atmospheric forcing from that period. The last NCEP–NCAR period has been repeated with the constant flux adjustment of Fig. 3 replacing the surface salinity restoring (dash–dotted line). (b) The last repetition of the NCEP–NCAR forcing is shown in more detail. (c) The detrended time series for each 54-yr subperiod (dash–dotted: first cycle; thick solid: second cycle; dotted: third cycle; thin solid: last cycle) of the integration show similar decadal to multidecadal variability.

Time series of the surface freshwater flux integrated over the Arctic as defined in Fig. 1. Integrated fluxes are given in kilometers cubed per year. The net flux (gray bars), the contribution by the net thermodynamic sea ice growth (dashed line), the constant flux adjustment (horizontal dash–dotted line), the P − E (thick solid line), and the continental runoff (thin solid line) are shown.

(a) Time series of the components of the quasi-southward freshwater transport (km3 yr−1) in Fram Strait as explained in the text. The gray line denotes the contribution by salinity fluctuation advected with the mean flow (area integral over 〈υ〉S′), the solid black line indicates the contribution from fluctuating advection of mean salinity (υ′〈S〉), and the dashed black line shows the correlation of current and salinity anomalies (υ′S′). All transports represent vertical integrals over all grid cells with quasi-southward mean flow. (b) The time series of the southward volume transport (Sv) in Fram Strait (solid) and the transport estimate using a simple 1.5-layer model (dash–dotted) are shown.

Time series of net sea ice transport through a section between Svalbaard and Novaya Semlya (see Fig. 1). Positive values indicate southwestward transport. The mean transport over the duration of the simulation is 314 km3 yr−1. 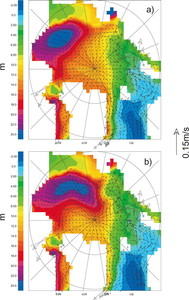