Objectively analyzed monthly mean (a) along-strait velocity, (b) salinity, and (c) temperature. Gray lines indicate moorings, white dots indicate instrument locations for each property, and the pink bars indicate areas along the moored array that are covered by sea ice 60% of the month. The 34.8 salinity contour (dashed black line) and the 27 kg m−3 isopycnal (black line) are noted in (b). Mean salinities ≥ 34.8 were seen only in October. The boundaries of the four dominant water masses (see Fig. 3 for θ–S characteristics) are shown for October in (c).

Monthly-mean fluxes, including uncertainties, for (a) volume, (b) liquid freshwater (reference 34.8), and (c) heat (reference 0°C). Daily fluxes are shown in gray and annual mean fluxes, including uncertainties, are noted in the bottom right of each panel. The annual freshwater flux estimate includes the contribution from sea ice (−11 mSv). All fluxes are estimated from the surface to the sill depth (640 m). 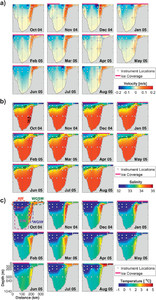 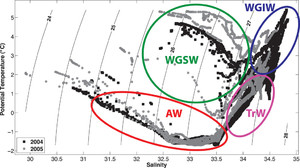 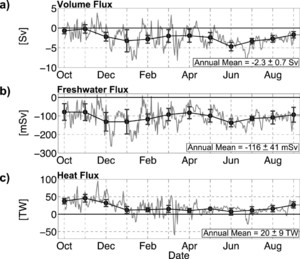 B. Curry
B. Curry

Search for other papers by C. M. Lee in
Current site
Google Scholar
PubMedClose
, and
B. Petrie
B. Petrie

Search for other papers by B. Petrie in
Current site
Google Scholar
PubMedClose

Davis Strait volume [−2.3 ± 0.7 Sv (1 Sv ≡ 106 m3 s−1); negative sign indicates southward transport], freshwater (−116 ± 41 mSv), and heat (20 ± 9 TW) fluxes estimated from objectively mapped 2004–05 moored array data do not differ significantly from values based on a 1987–90 array but are distributed differently across the strait. The 2004–05 array provided the first year-long measurements in the upper 100 m and over the shelves. The upper 100 m accounts for 39% (−0.9 Sv) of the net volume and 59% (−69 mSv) of the net freshwater fluxes. Shelf contributions are small: 0.4 Sv (volume), 15 mSv (freshwater), and 3 TW (heat) from the West Greenland shelf and −0.1 Sv, −7 mSv, and 1 TW from the Baffin Island shelf. Contemporaneous measurements of the Baffin Bay inflows and outflows indicate that volume and freshwater budgets balance to within 26% and 4%, respectively, of the net Davis Strait outflow. Davis Strait volume and freshwater fluxes nearly equal those from Fram Strait, indicating that both are significant Arctic freshwater pathways.

Davis Strait volume [−2.3 ± 0.7 Sv (1 Sv ≡ 106 m3 s−1); negative sign indicates southward transport], freshwater (−116 ± 41 mSv), and heat (20 ± 9 TW) fluxes estimated from objectively mapped 2004–05 moored array data do not differ significantly from values based on a 1987–90 array but are distributed differently across the strait. The 2004–05 array provided the first year-long measurements in the upper 100 m and over the shelves. The upper 100 m accounts for 39% (−0.9 Sv) of the net volume and 59% (−69 mSv) of the net freshwater fluxes. Shelf contributions are small: 0.4 Sv (volume), 15 mSv (freshwater), and 3 TW (heat) from the West Greenland shelf and −0.1 Sv, −7 mSv, and 1 TW from the Baffin Island shelf. Contemporaneous measurements of the Baffin Bay inflows and outflows indicate that volume and freshwater budgets balance to within 26% and 4%, respectively, of the net Davis Strait outflow. Davis Strait volume and freshwater fluxes nearly equal those from Fram Strait, indicating that both are significant Arctic freshwater pathways.

A long-term monitoring program in Davis Strait began in September 2004. The 2004–05 program included 14 moorings (4 per shelf and 6 central moorings; Figs. 1b,c) north of the sill (640 m) at a maximum depth of 1040 m. Instrumentation measured velocity, temperature, and conductivity at 30 min and hourly intervals. On the Baffin Island shelf, a prototype iceberg-resistant mooring (IceCAT), consisting of a float and SBE37 MicroCAT inductively coupled to a bottom-mounted datalogger measured temperature and conductivity at 5-min intervals.

Currents were resolved parallel and orthogonal to the array line (77.3°); tidal variability was removed with a 34-h low-pass Butterworth filter and subsampled to obtain daily values; and missing data were filled by interpolation and extrapolation using archived data to produce full-depth temperature (T) and salinity (S; BIO; T and S data are available online at http://www.mar.dfo-mpo.gc.ca/science/ocean/) and along-strait velocity (V) profiles at each mooring (see appendix A of online supplement).

Daily volume, freshwater, and heat fluxes were averaged to compute monthly and annual fluxes. The reference salinity (34.8, mean Arctic Ocean salinity; Aagaard and Carmack 1989), sea ice salinity (5), and temperature (0°C) were chosen to maintain consistency with Cuny et al. (2005). Mooring deployment and recovery provided <10 days of data in September, insufficient to compute reliable flux estimates for that month. Monthly fluxes for September 2005 were estimated as the average of October 2004 and August 2005 values.

Flux uncertainties were estimated as the sum of OA random error, standard error of the mean calculated using the Student’s t distribution with 95% confidence limits, and maximum range of flux estimates obtained using different approaches to compute the mean field. Additional uncertainties associated with the ice flux and estimation of the shelf and 0–100-m salinities were added to the freshwater flux uncertainty estimate. Sensitivity tests were performed to estimate flux variability associated with differences in mean field and sea ice flux.

a. Current and water mass structure

Circulation during 2004–05 was dominated by northward flow on the West Greenland (WG) shelf and slope and southward flow over the remaining strait with weaker currents below 200 m (Fig. 2a). The surface-intensified (upper 200 m) southward flow extended eastward ∼150 km from Baffin Island with a bimodal structure featuring strong flows over the slope, weaker currents approximately 100 km offshore, and maximum velocities at the BIC–WGSC front. The narrow (∼50 km) WGSC had an average velocity magnitude 7 times greater than the WGC. Opposing currents in the BIC–WGSC front were strongest in autumn and winter and present in all months but April. A weak northward flow over the Baffin slope in December and January was also noted by Tang et al. (2004) and Cuny et al. (2005).

Following the definitions of Tang et al. (2004), four water masses are identified in Davis Strait and defined in Fig. 3. Arctic Water dominated the upper layers to depths approaching 200 m and extending to ∼200 km from Baffin Island (Figs. 2b,c). Salinity increased ∼0.4 from December to March in the upper 200 m with local ice formation (∼1.25 m) accounting for only ∼0.1 of the increase, with the remaining due to salt advection. The strong BIC–WGSC frontal zone, separating Arctic Water (AW) and transitional water (TrW) from West Greenland Irminger Water (WGIW), is evident over the slope. Maximum temperatures and salinities of the WGIW occurred in autumn, decreased until April and remained nearly constant until August, consistent with advection from the south (M. Stein 2009, personal communication). Recirculated WGIW influenced the temperature of TrW, but their temperature variations were not well correlated, possibly due to variations in recirculation and mixing time scales in Baffin Bay. The WGSW temperature had an annual cycle of ∼6°C with a late summer maximum and March minimum. Salinity variations on the WGSW (autumn minimum, May maximum, and typically freshest at the coast) reflect melting Arctic sea ice advected from Fram Strait, local and advected runoff, and interactions with WGIW. Ice was present from November 2004 to July 2005 with peak coverage in February.

b. Annual and monthly fluxes

Net monthly volume and freshwater fluxes were southward year round with weak peaks in December–January and June (Fig. 4). Though not statistically significant, the peaks suggest transport may have been driven by advection (December–January) from the Arctic Ocean via the CAA and local (June) forcing related to the spring–summer Baffin Bay ice melt. A reasonable advection speed of 0.08–0.12 m s−1 is required for the broad June–August transport peak in Lancaster Sound (Prinsenberg et al. 2009) to have triggered the December–January transport peak at Davis Strait. Heat flux was strongest between October and December because of increased southward transport of cold BIC water and northward transport of warm WGSC water: it was nearly constant between January and August.

The September linearly interpolated volume and freshwater fluxes, −1.7 Sv and −99 mSv, agreed well with the geostrophic estimates from the hydrographic sections for 2004 (−1.9 Sv and −96 mSv) and 2005 (−2.6 Sv and −107 mSv), particularly for freshwater. The geostrophic transports were based on a ∼1-day transect of the strait and neglect barotropic contributions, particularly large for the northward WGSC, which could account for the larger difference in volume transport.

Contemporaneous measurements across the primary pathways of Baffin Bay, combined with estimates of ice contributions, precipitation less evaporation (P-E), and historical data from Jones Sound, allow assessment of Baffin Bay volume and freshwater budgets (Table 1; see appendix C of the online supplement for details). Budgets close to within 0.6 Sv for volume and 5 mSv for freshwater: both are within the uncertainties of the estimates. These imbalances represent 26% and 4% of the net annual volume and freshwater transports through Davis Strait and provide a rough gauge of the array’s ability to monitor the fluxes. The larger volume flux imbalance may reflect decreased resolution below 200 m in Davis Strait (a larger fraction of the volume, relative to freshwater, flux is in the deeper layer) or interannual variability.

Davis Strait, along with Fram Strait, represents a critical component of Arctic volume and freshwater budgets and an important input of freshwater for the subpolar North Atlantic. The 2004–05 fluxes are statistically similar to those calculated for 1987–90, though comparisons suggest a decrease of the volume transport for the central strait. Varying methodologies, observational coverage, and record length along with interannual variability create a somewhat disparate comparison, suggesting a reanalysis using common methodologies. Larger differences might have been expected given recent changes seen in the Arctic and CAA. Continued measurements are needed to monitor and understand any variability of the CAA outflow in response to Arctic change.