Variation of the horizontal gradient of depth-averaged salinity at the estuary mouth (i.e., ) with the estuary control variables— and . The solid lines represent isocontours of .

Estuary classification diagram with lines representing isocontours of . The three regions are three types of estuaries: (a) light gray is well mixed, (b) white is partially mixed, and (c) dark gray is highly stratified or salt wedge. For data and expansion of abbreviations, see Table 1.

Comparison of stratification at the estuary mouth obtained from theory or from field data.

Comparison of the estuary classification scheme with the approximation in Eq. (19). The gray area indicates the region where estuaries should ideally cluster. Field data from Geyer (2010) and Prandle (1985) are plotted for comparison with the theoretical predictions. 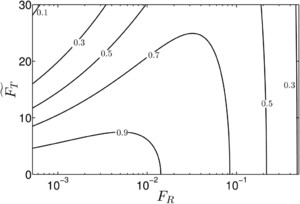 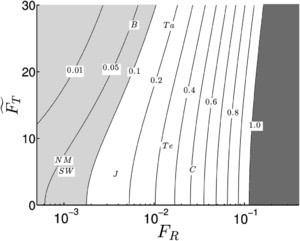 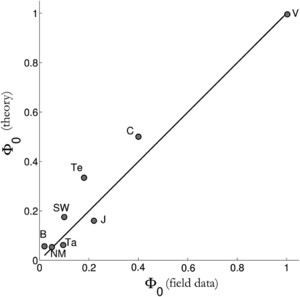 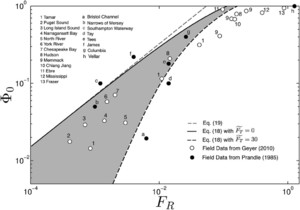 Studies over a period of several decades have resulted in a relatively simple set of equations describing the tidally and width-averaged balances of momentum and salt in a rectangular estuary. The authors rewrite these equations in a fully nondimensional form that yields two nondimensional variables: (i) the estuarine Froude number and (ii) a modified tidal Froude number. The latter is the product of the tidal Froude number and the square root of the estuarine aspect ratio. These two variables are used to define a prognostic estuary classification scheme, which compares favorably with published estuarine data.

Studies over a period of several decades have resulted in a relatively simple set of equations describing the tidally and width-averaged balances of momentum and salt in a rectangular estuary. The authors rewrite these equations in a fully nondimensional form that yields two nondimensional variables: (i) the estuarine Froude number and (ii) a modified tidal Froude number. The latter is the product of the tidal Froude number and the square root of the estuarine aspect ratio. These two variables are used to define a prognostic estuary classification scheme, which compares favorably with published estuarine data.

Since the introduction of the stratification–circulation diagram by Hansen and Rattray (1966), numerous estuarine classification schemes have been proposed. The reader might ask—why revisit this topic? Our motivation for pursuing a new classification scheme stems from notable recent advances in estuarine physics, many of which are reviewed in MacCready and Geyer (2010). These advances led us to hypothesize that there might be a simple means to determine the conditions under which a sufficiently well behaved estuary will be well mixed, partially mixed, or highly stratified. We start by outlining the classical tidally averaged model as presented by MacCready and Geyer (2010). We then rewrite the equations of this model in nondimensional form. Using this new set of equations we develop our classification scheme, and then compare its predictions with field observations.

The physics of estuarine circulation is governed by the competing influences of river and oceanic flows. While the former adds freshwater, the latter adds denser saltwater, which moves landward because of the combined effect of tides and gravitational circulation (or exchange flow). The complicated balance between the river, the exchange flow, and the tides determines the estuarine velocity and salinity structure.

We consider an idealized rectangular estuary of depth H and width B. The origin of the coordinate system is at the free surface at the mouth of the estuary with the horizontal (i.e., x) axis pointing seawards and the vertical (i.e., z) axis pointing upward. Therefore, both the horizontal and vertical distances within the estuary are negative quantities. To obtain the width- and tidally averaged horizontal velocity u, and salinity s distribution in the estuary, these quantities are first decomposed into depth-averaged (overbar) and depth-varying (prime) components: and . The quantity is the cross-section-averaged river velocity, where is the mean river flow rate, and A = BH. The solution for both partially and well-mixed estuaries was given by Hansen and Rattray (1965) [for a recent review, see MacCready and Geyer (2010)]:

In Eq. (3), ξ = z/H ∈ [−1, 0] is the normalized vertical coordinate. The subscript x implies ∂/∂x, where x is dimensional. The vertical eddy diffusivity is . For exchange-dominated estuaries, an important parameter is the exchange velocity scale:

Here, is twice the speed of the fastest internal wave that can be supported in an estuary (MacCready and Geyer 2010). The vertical eddy viscosity is and β ≅ 7.7 × 10−4 psu−1. The nondimensional salinity is defined as Σ = s/socn, where socn is the ocean salinity. Equations (1) and (2) were derived under the assumption that the density field is governed by the linear equation of state: ρ = ρ0(1 + βs), where ρ0 is the density of freshwater. The details of the derivation are well documented in MacCready (1999, 2004).
The salt balance is given by

where is the horizontal diffusivity. This equation physically implies that the temporal salt accumulation in an estuary is due to the competition between salt addition and removal processes. While exchange (note that is negative) and tidal processes add salt, river inflow removes it. At steady state, Eq. (5) can be rewritten as

where a1 = 0.035, and uT is the amplitude of the depth-averaged tidal velocity. Based on field studies and modeling of the Hudson River estuary, Ralston et al. (2008) obtained

Chatwin (1976) further reduced Eq. (10) to two simple cases with analytical solutions: the exchange-dominated case (T → 0) and the tidally dominated case (E3 → 0). While these approximations have been widely used, there does not appear to have been any serious attempt to determine the conditions under which they are applicable.

In this section, we rewrite the governing Eqs. (1), (2), and (6) in nondimensional form in anticipation of: (i) revealing the important nondimensional parameters governing the problem and (ii) facilitating comparison of the relative magnitude of each of the terms in Eq. (6). Defining X = , Eq. (6) can be rewritten as

The velocity and uT have been nondimensionalized by c to obtain the densimetric estuarine Froude number and the tidal Froude number = uT/c. Substituting Eq. (12) into (11) yields

The constant C4 = 0.667, C5 = 47.0, and C6 = 70.5. In Eq. (14), the quantity U = u/c is the nondimensional horizontal velocity (not to be confused with FR, which is ). Equations (13)–(15) are the nondimensional governing equations for our idealized estuary.
Equation (13) poses a nonlinear initial value problem, which can only be solved numerically. For that, the conditions at the estuary mouth have to be determined. One such condition is Σ(0, −1) = 1; meaning that the salinity at the bed of the estuary at its mouth has to be the same as the ocean salinity. Substituting Eq. (15) into (13) and making use of this condition, we obtain

where C7 = 5.31 and C8 = 6.04. Equation (16) is actually the nondimensional version of Eq. (19) of MacCready (2004). Being a cubic equation, it can be solved analytically to evaluate the salinity gradient at the estuary mouth . Additionally, Eq. (16) indicates that is only a function of and . The variation of with these two Froude numbers is depicted in Fig. 1. The figure shows that over the entire parameter space.

Our goal is to develop a simple classification scheme that distinguishes between well-mixed, partially mixed, and highly stratified estuaries. A relevant parameter for classifying estuaries is the nondimensional salinity stratification at the estuary mouth . It is defined as follows:

This parameter ranges between 0 and 1. While the lower limit implies a very well-mixed estuary, the upper limit indicates the transition to salt wedge. Substituting Eq. (15) into (17) yields:

Together, Eqs. (16) and (18) provide new insight into estuarine physics. Apart from broadly classifying estuaries into three categories, namely highly stratified, partially mixed, and well mixed, these equations reveal that under the given assumptions just two parameters, and , are needed to determine the stratification at the estuary mouth . The new nondimensional parameter reveals that the “tidal effect” is not simply represented by the tidal Froude number FT, but the latter combined with the square root of the estuarine aspect ratio B/H. Moreover the equation set predicts , given and . If the estuarine condition changes (for example, the river flow or the estuary depth), the parameters and will change accordingly. These newly obtained Froude numbers will produce a new , which reflects the response of estuarine circulation and mixing to these changes. However, we should be mindful of the fact that estuaries can be “sluggish” in their response to changes in the governing parameters (MacCready 2007). For example, many estuaries are too sluggish to respond to fortnightly variability in tidal forcing.

To test the applicability of our classification scheme we made use of the field data presented in Prandle (1985). Using these data we have computed , , B/H, and directly, and from Eqs. (16) and (18); see Table 1. We have compared the computed values of with the measured values in Fig. 3. The comparison is good considering the accuracy to which and can be determined from field data.

Estimates of estuarine parameters calculated using the data of Prandle (1985) and values of B obtained from maps. Equation (18) is used to obtain (theory).

It is interesting to note that if both and are small then Eq. (16) reduces to and Eq. (18) reduces to

The same result was obtained by MacCready and Geyer (2010) by combining Knudsen's relations (Knudsen 1900) with Eq. (9). Since Knudsen's relations are derived from mass and salt balances and do not consider momentum balance, Eq. (19) is an approximation of Eq. (18). For a given , Eq. (19) always yields a higher value for than Eq. (18). The difference is small when both and are small, but increases as and increase (Fig. 4).

We also compare the theoretical results with the field data of Prandle (1985) in Table 1 and Fig. 2.6 of Geyer (2010) in Fig. 4. We have chosen to plot Eq. (18) for and 30, because most estuaries have within this range. Ideally, most of the partially and well-mixed estuaries should cluster within the gray region bounded by the lines and 30, which is indeed the case. The most important aspect of this comparison is that the theoretical curves follow the overall trend of the field data. However, tends to be overpredicted at high values of , that is, mixing is underpredicted. This discrepancy could arise if the values of were measured at an upstream location, rather than at the mouth, or could be a result of increasing stratification inhibiting vertical mixing.

Finally, we refer to the assumptions behind our theoretical analyses and their consequences. We have simplified the problem by assuming a tidally averaged estuary with rectangular geometry. In real estuaries, bathymetry can play a crucial role in determining estuarine circulation. Moreover, the appearance of just two parameters ( and ) in our equations is a consequence of the empirical Eqs. (8) and (9). These equations also determine expressions for the coefficients C1, C2, … , C10, given in Table 2. All these coefficients depend upon the Schmidt number (i.e., Sc), which is an empirical quantity that could conceivably vary from estuary to estuary, within a given estuary, or with time. Although Eqs. (8) and (9) are simple and elegant, they may not be very realistic. In real estuaries, both and are variables. Moreover, other empirical parameterizations have shown that depends upon the Richardson number (MacCready and Geyer 2010). While the inclusion of the Richardson number, or any other relevant parameter, might improve the predictability of the classification scheme, the value of this improvement would have to be weighed against the added complexity of the resulting classification scheme. 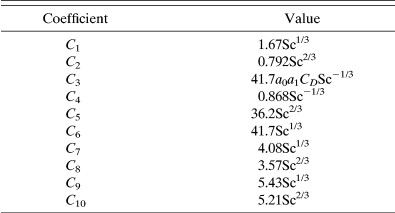