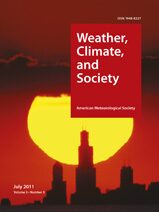 In the brief history of Weather, Climate, and Society, the journal’s editorials have addressed a number of topics, including policy issues, methodological concerns, and emerging themes in the literature of the field. To this set I am now adding a topic generated by the weather itself: Hurricane Irene, whose arrival and passage I recently witnessed in New York. This hurricane is relevant for research in weather, climate, and society, particularly in the area of risk perception. One of the most destructive hurricanes to strike the United States in recent years, it will doubtless receive attention from many perspectives and on many scales. I offer my immediate personal observations, which may complement future studies and even help orient such studies as well.

Irene, an unusually severe hurricane, largely spared New York. Though the storm had weakened by the time it reached New York, the low level of damage also reflects preparations taken by the city’s government and residents. This, in turn, is linked to the question of risk perception, a major theme in research on weather, climate, and society. The case is particularly interesting, because in recent decades New York had not experienced hurricanes that could have led its residents to heed warnings. In many cases, prior experience of a hazard increases, rather than reduces, the propensity to take action after receiving a warning. To understand these preparations, I look to several topics discussed by specialists in risk perception: the importance of timing, the role of risk communicators, and the social amplification of risk.

New Yorkers’ perceptions of Irene are reflected in their discussions, which concentrated on certain features of the storm, particularly the strength and track, at the expense of others, such as the size and speed. To some extent, attention to a hurricane’s strength is inevitable, because hurricanes can have a sustained wind speed of over 74 mph. This led many residents to assume that the most destructive aspect of the hurricane would be its winds. The ubiquitous image of the cone of probability of the path of the hurricane, with a line showing the past and projected path of the eye, directed public attention to its track. This attention to strength and track directed attention away from size and speed. Why, then, did New Yorkers prepare? Three factors were at work: the fortunate timing of the storm, the risk communication efforts of government officials, and the social amplification of risk in the dense social fabric of the city.

Three features of the timing of the hurricane deserve mention. First, it arrived in a season filled not only with more hurricanes than usual but with other unusual weather events and hazards, priming a concern with possible disasters. The first weeks of August brought heavy rains to much of the northeast. On August 23, an unusual earthquake, magnitude 5.8, occurred in Virginia, with tremors reported from as far as Georgia, Illinois, and eastern Canada. Though the rains had a great effect on potential hurricane impacts, because the already-wet soils could not absorb as much precipitation as usual, the earthquake loomed larger in many people’s minds. Facebook posts that I saw commented on the earthquake as a kind of portent, and some users joked about whether a plague of locusts was far off.

Second, the slow movement of the hurricane (14 mph rather than the typical 25–35 mph for hurricanes off the Mid-Atlantic states) gave New Yorkers more time than usual to watch its arrival. Once the storm drew near Cape May, it was reported as regional news, as part of the tri-state area of New York, New Jersey, and Connecticut, rather than national news. The preparations taken there, reported on Thursday, gave an impetus to New Yorkers to ready themselves as well.

Third, Irene coincided perfectly with the weekend in New York, reinforcing the withdrawal of residents to the protection of their homes or of shelters. After a sunny Wednesday, a damp Thursday, and a cloudy Friday, New York residents awoke Saturday morning to gray skies, drizzle, and heavy humid air. The winds gradually increased, and heavy rain pelted the city late that night and early Sunday morning. The storm passed over the city Sunday around 0900 LST and abated quickly. The reaction to the storm would have been different if it had reached the city at the middle of a busy weekday.

The key risk communicators were public officials, who took dramatic, highly visible steps to respond to Irene. The New Jersey governor gave evacuation orders for coastal counties in New Jersey. The governors of New York and Connecticut also declared states of emergency before the storm, and the mayor of New York ordered evacuations of nursing homes and hospitals in low-lying areas. There were responses at the national level as well, though these did not draw as much comment locally. The Federal Emergency Management Agency, well aware of its failures at Hurricane Katrina in 2005, readied disaster response teams. President Obama returned early from his vacation on Martha’s Vineyard and issued federal emergency declarations for New York, New Jersey, Connecticut, and other coastal states, allowing for federal support after the storm passed.

Friday saw more dramatic steps, as Mayor Bloomberg ordered evacuations of the city’s most flood-prone areas in zone A, the most vulnerable of three potential evacuation zones. This mandate affected over 350 000 residents and led the servers of the city’s Office of Emergency Management to crash as people sought more information. The mayor also made the unusual step of shutting down the city’s subways and buses, and a number of bridges and all the major airports were also closed. Major-league sports games and Broadway plays were cancelled. These closures stimulated other preparations: New Yorkers took in patio furniture; moved potted plants off balconies and fire escapes; and stocked up on batteries, flashlights, bottled water, and dried food. By Saturday, many stores and restaurants were closed, because employees were unable to travel to work; the streets were quieter, with the last residents rushing to buy supplies where they could.

The social amplification of risk increased the sense of concern. In this densely populated city of pedestrians, one person’s preparations would be seen by many others, creating a general atmosphere of urgency. The city contains many spaces where neighbors, coworkers, and strangers could discuss the storm: by elevators in office buildings, on subway stations, and in the lobbies of apartment houses. Though the lack of coordination of evacuation efforts in the United States has often been described as an obstacle to effective preparedness, it may have been a positive force, at least with this slow-moving storm, because it allowed elected officials who were particularly concerned to order evacuations early and to stimulate others to enact similar measures.

This perception of a severe risk led residents to stay at home. Television programs showed Times Square and other central areas almost empty. Although public transportation would remain suspended until Monday, the sidewalks and parks were filled with pedestrians by the late morning on Sunday, some walking dogs or taking children out, with others just looking around. The rains were light, and the winds were still strong but not enough to impede walking. The media was reporting conditions across the city (especially in zone A) and the region, and both conventional and social media provided individuals with information on family and friends, but only on foot could New Yorkers see the effects of the storm on their neighborhoods. In my area near Riverside Park in Manhattan, many people were taking pictures of flooded portions of roads and downed trees. They gazed out at the wind-driven Hudson River, much higher than usual and with swells and white caps. People traded stories of the loudness of the storm and the sense of confinement. By Monday, public transportation was running; nearly everyone went back to work; and, except for a few corners of the city where power had not been restored, life was back to normal. The clear blue skies, moderate temperatures, and low humidity made the morning particularly beautiful and added to the sense that the storm had passed New York City without significant destruction, a sharp contrast to the severe flooding in nearby areas upstate and in New England.

If fortunate timing, effective risk communication, and social amplification strengthened risk perceptions and supported preparations in New York, will there be any long-term learning that will support preparations for future storms? It is too early to be certain, but some signs suggest that New York constructed the event as a “near miss” rather than a “false alarm,” suggesting the importance of social and contextual factors in separating these two outcomes.

It is unclear what the long-lasting effects of Hurricane Irene will be on New York. At a minimum, many residents learned that their city contains three levels of evacuation zones and that it is vulnerable to flooding in hurricanes as well as to high winds. Other effects may be judged from comments made after the event. Though some people complained about the hype in the media, most felt that they were fortunate, especially because other areas had been so heavily hit. “We dodged a bullet,” one person said on a call-in television program. “We didn’t dodge a bullet, we dodged a missile,” was the reply. These brief comments encapsulate several points. They suggest that residents still focus on the strength and track of hurricanes, rather than on the size and speed. They also convey the sense that the preparations had been wise, even if the storm proved less destructive than anticipated. Though earlier research has suggested that individuals who live through hurricanes and experience little harm may be overconfident in the future, these comments by New Yorkers offer an alternative possibility: the confirmation bias that leads people to think that they acted correctly. There appears to have been relatively weak opposition to evacuation orders. This suggests that New Yorkers—and other Americans—are coming to expect and approve of elected officials who respond promptly and fully to hazard warnings.